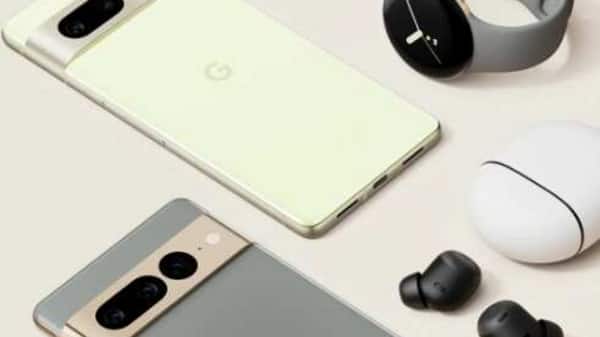 Google Pixel 7 and Pixel 7 Pro colours have recently been showcased by the smartphone manufacturer. Both the upcoming smartphones would come in three colour variants each. The released images also showcase the slight differences in the rear camera bars of the two models. The Pixel 7 series would be powered by Google’s next generation Tensor G2 SoC. Google has scheduled an event on October 06 to launch its Pixel 7 and Pixel 7 Pro alongside Pixel Watch. Additionally, it will unveil new Nest smart home devices at the launch.

Both the smartphones have similar designs, however the Pixel 7 Pro looks slightly shiny and polished and the Pixel 7 seems to come with a matte finish. Further, the Pixel 7 Pro sports two cutouts in the metal strip , unlike the single cutout in the pixel 7. The larger slot features dual image sensors and the separate cutout on the Pixel 7 Pro may house a telephoto camera as well.

As per the landing page, the next generation chipset which powers the Pixel 7 series is called Google Tensor G2. It is believed to bring new personalised features to photos, videos, security and speech recognition. These upcoming handsets would also boot Android 13 out of the box.

To recall, Google tweeted, “It’s all coming together. Join us live for #MadeByGoogle on October 6th at 10am ET. Sign up for updates and add to your calendar.” This tweet mentions that the launch event is scheduled for October 6 at 10am ET (7:30pm IST). The event will be telecasted live on the company’s social media platforms along with YouTube.

In a tweet, the company has revealed some of the features that will come with the Pixel Watch. This will include fitness tracking with Active Zone Minutes, stats, progress, personal fitness goals along with continuous heart rate tracking, sleep tracking and more.