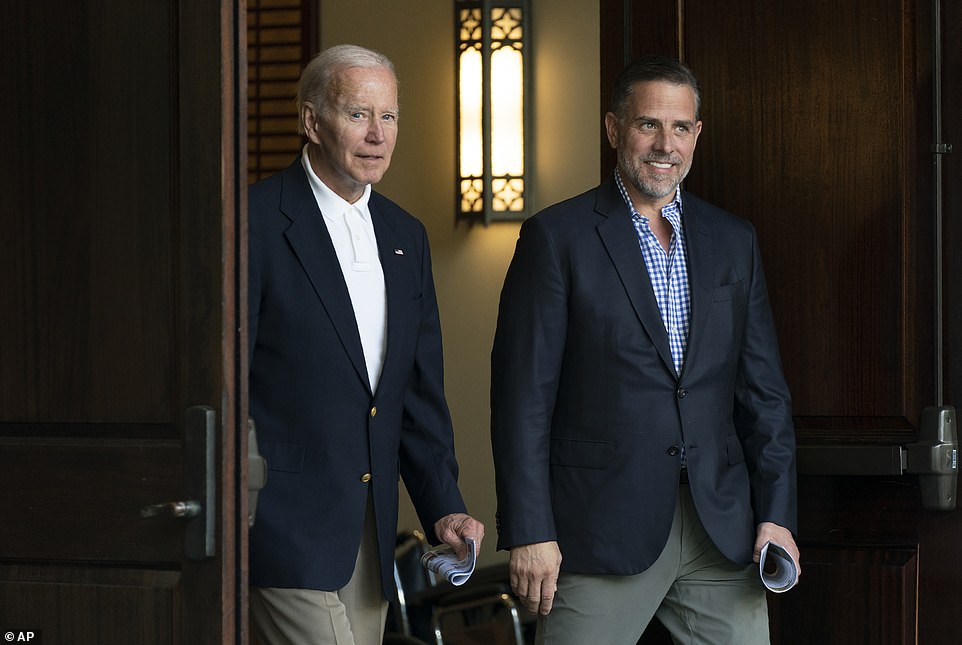 Republicans are claiming that President Joe Biden was involved in his son Hunter’s controversial foreign business deals, which allegedly spans 50 different countries, lawmakers said in a press conference on Thursday.

It comes one day after the GOP clinched 218 seats in the House of Representatives, cementing their majority – and investigative powers – in the next Congress.

The president has long denied involvement in and knowledge of his son’s foreign dealings – some of which are being investigated by federal authorities.

But Rep. James Comer accused Biden of being ‘chairman of the board’ of his family’s business dealings and even claimed the White House spent more than $250,000 to deflect negative stories about Hunter.

‘This is an investigation of Joe Biden,’ he said. ‘I think we’ve laid out the evidence as to why we feel it’s important, and we’re going to move forward with that.’

He said later, ‘We’re trying to stay focused on – was Joe Biden directly involved with Hunter Biden’s business deals, and is he compromised?’

Comer said he’d even like members of the Biden family to testify before the House when asked, but said the main focus of their probe right now was to access bank records.

‘As part of our investigation, we have evidence that the finances, credit cards, and bank accounts of Hunter and Joe Biden were commingled, if not shared,’ the Republican lawmaker said. 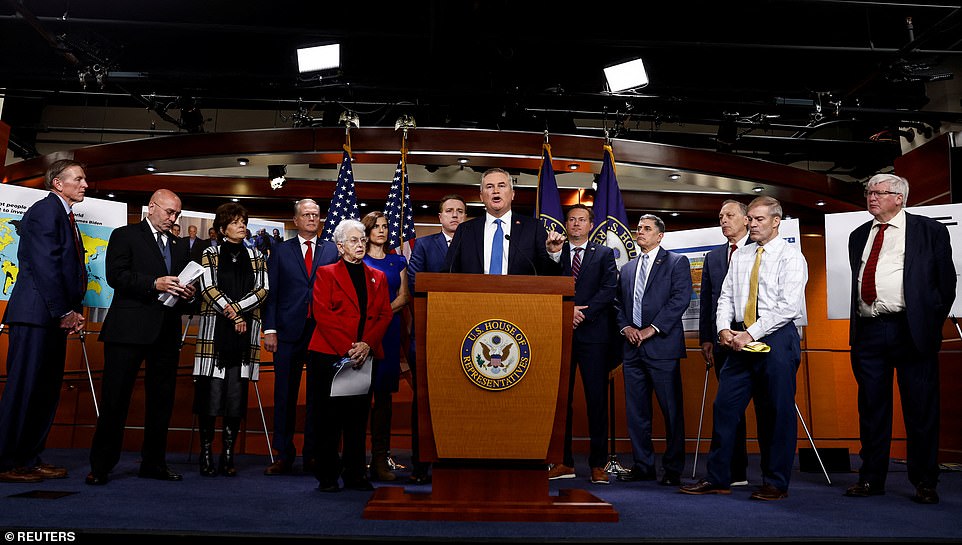 Rep. James Comer led the press conference, where he made clear that the the president himself was the target of the House GOP’s probe 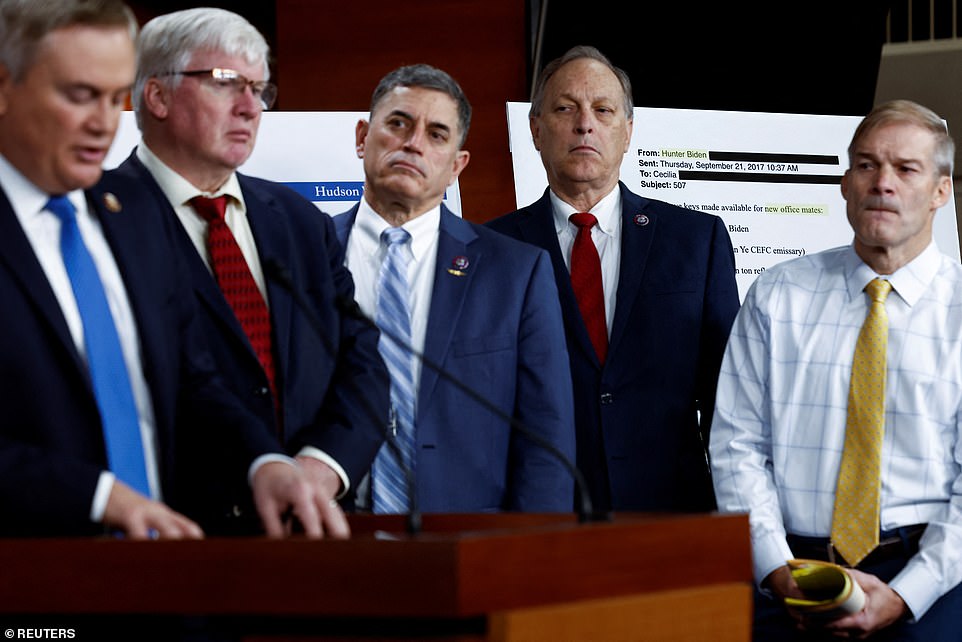 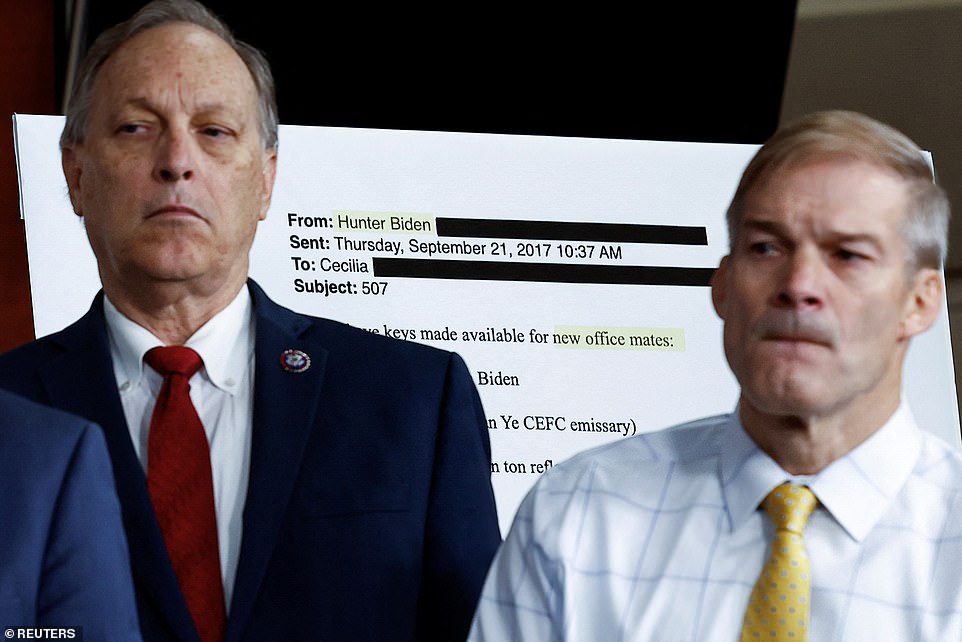 Rep. Andy Biggs and Rep. Jim Jordan stand in front of a blown up email with redactions

He said some accounts linked to the Biden family raised ‘red flags’ about ‘suspicious or illegal activity.’

At least one of those red flags, known as ‘SARs,’ allegedly ‘connects Hunter Biden and his business associates to international human trafficking, among other illegal activities,’ Comer said.

‘We have repeatedly called on the Biden Treasury Department to release additional financial documents to committee Republicans, but thus far Treasury has refused,’ the lawmaker said. ‘We want to know what the Biden administration has tried to hide from the American people and why they are not being transparent.’

Hunter ally Schwerin was reportedly head of the president’s son’s company and handed the majority of his finances – and appointed to a position within the Obama administration, when Joe Biden was vice president.

‘After an apparent falling out with Schwerin, Hunter began coordinating business himself – and increasingly the deals brought in Joe Biden as a direct equity holder,’ Comer said.

He claimed Hunter went a step further and tried to get these bank alerts quashed – allegedly with the help of a Clinton administration official. 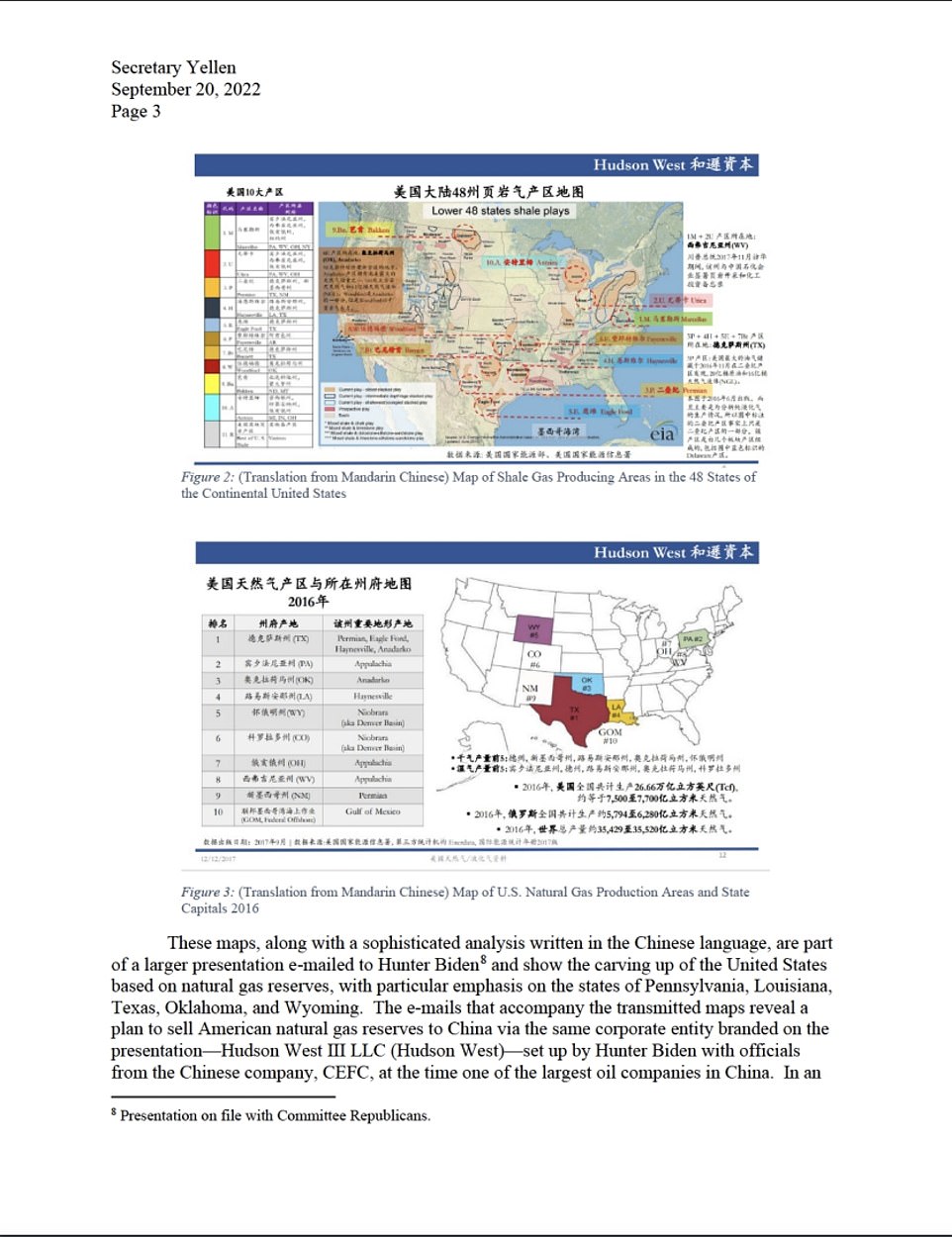 ‘JOE WAS THE BIG GUY’: HOUSE REPUBLICAN ALLEGATIONS AGAINST THE BIDEN FAMILY 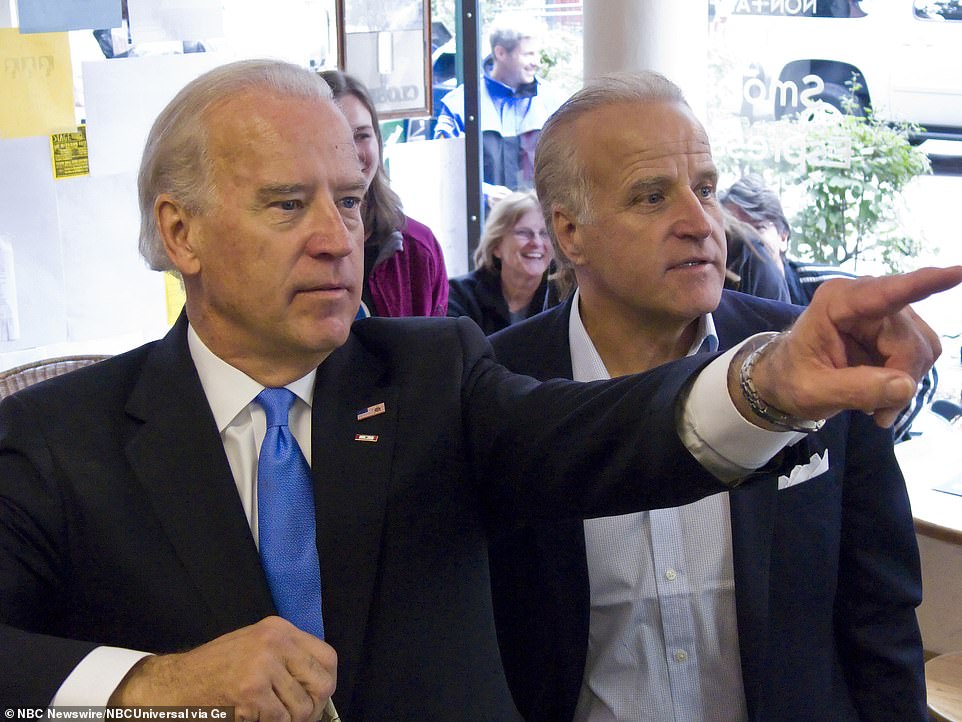 Biden’s brother, Jack (right), is also thought to be involved in Hunter’s vast network of foreign business ties, according to emails procured from Hunter’s laptop 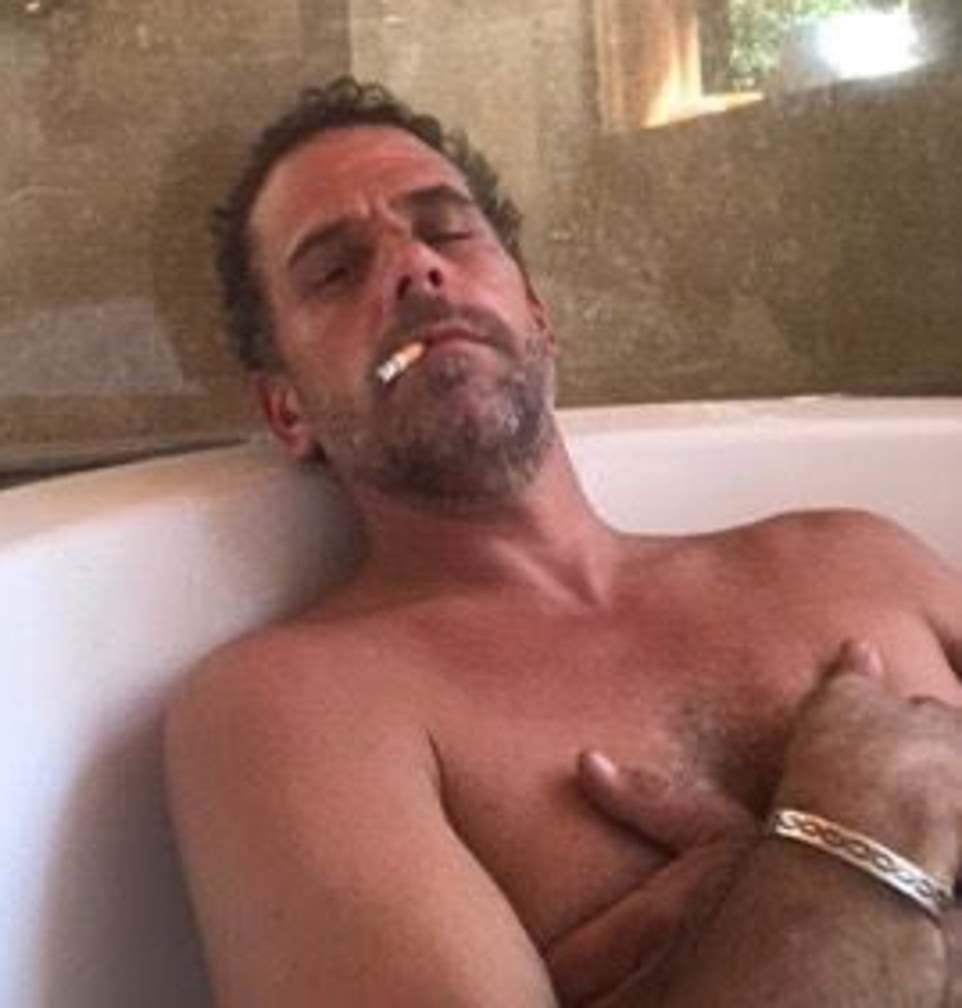 Comer defended their intense probing of Hunter Biden during the press conference, stating: ”Hunter Biden isn’t this guy who just got a bad rap because he’s got a drug problem’ 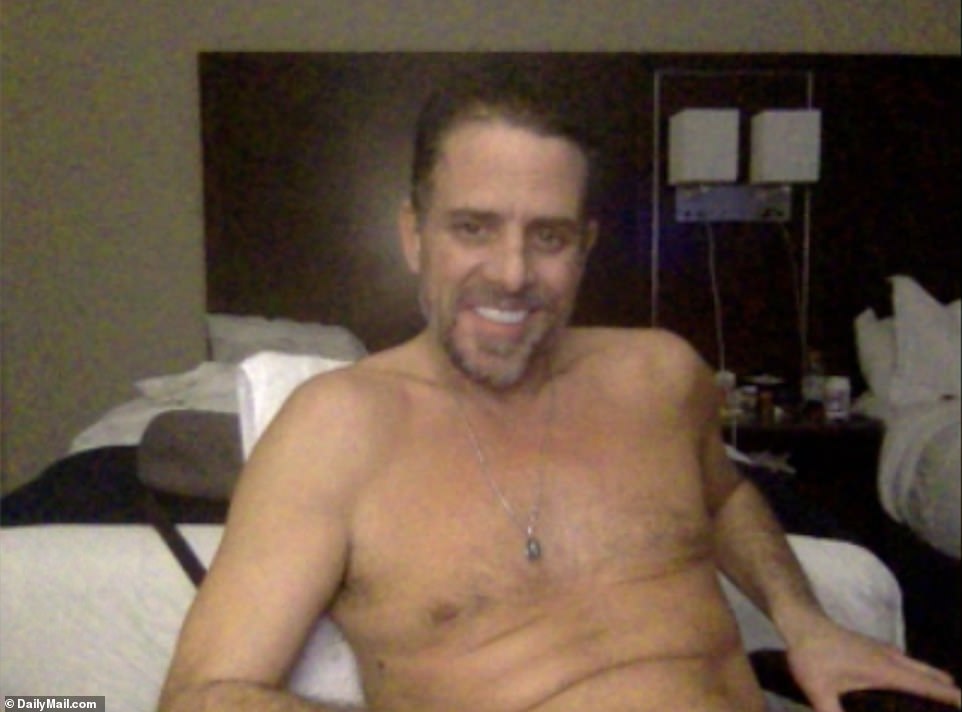 Twitter and Facebook suppressed or flagged the Post’s story about the contents of Hunter Biden’s laptop ahead of the 2020 presidential election. The story was later confirmed by many outlets, including DailyMail.com. Pictured: An image from Hunter’s abandoned laptop

Comer also took a swipe at more holistic coverage of the president’s son that puts Hunter’s questionable ethics into context with his battle against drug addiction.

‘Hunter Biden isn’t this guy who just got a bad rap because he’s got a drug problem,’ Comer said.

The lawmakers said a report detailing their investigation and evidence thus far – which appears to largely be made up of whistleblower testimony – would be forthcoming.

The troubling scope of Hunter’s business dealings in Ukraine and China came to light when the New York Post, and subsequently DailyMail.com, authenticated the contents of a laptop hard drive purportedly belonging to the president’s only surviving son.

He received a lucrative salary while on the board of Ukrainian energy company Burisma, despite having no experience in the industry, while his father was vice president and leading a coalition to crack down on corruption there.

Emails recovered from the laptop also show Hunter discussing with associates the beginnings of a business deal in China – where one message discussing equity stakes carves out 10 percent ‘for the big guy.’ 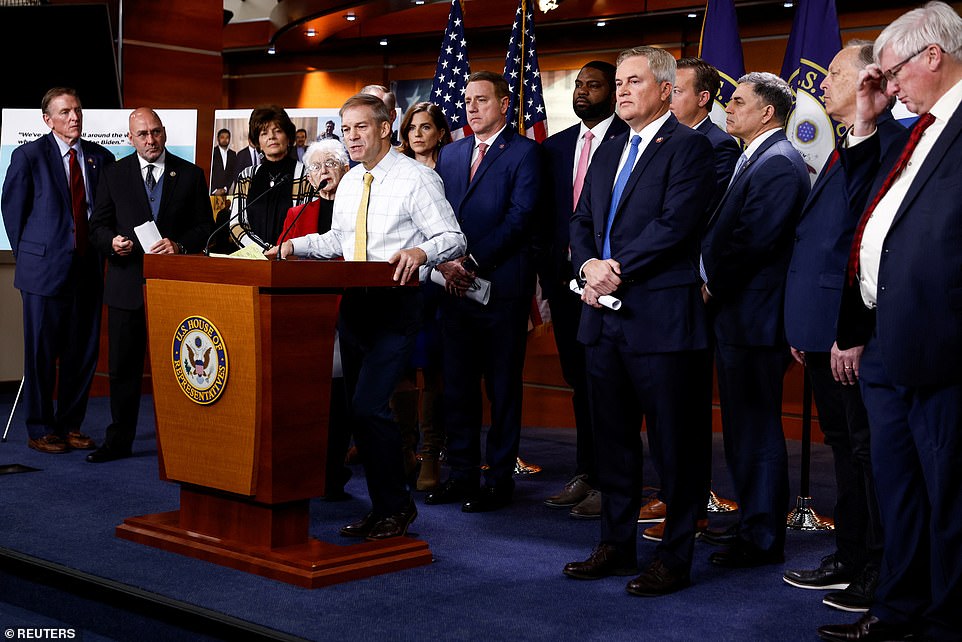 Republicans on Thursday alleged that ‘the big guy’ is the US president.

‘At a time when Americans are suffering from high energy prices, because of this administration’s terrible energy policy, we find evidence that Hunter Biden and Joe Biden were involved in a scheme to try to get China to buy liquefied natural gas, and from a whistleblower, to try to get their foot in the door with China starting to purchase an interest in natural gas drillers,’ Comer said.

He presented as evidence a print-out of what he claimed was a slide show regarding the business deal that was found on Hunter’s laptop.

When pressed, however, Comer said the slide was likely from around 2017.

The Kentucky Republican would not say concretely how that is linked to today’s energy crisis when asked, but said: ‘I mean, Joe Biden says he’s gonna stand up to China.’

‘Joe Biden says he’s going to rewrite our whole energy policy…And he was a 10 percent equity owner in a company whose sole mission was to to purchase liquefied natural gas from the United States and try to take over the energy the natural gas industry in America through natural gas wholesalers and natural gas drillers,’ Comer said.

‘I mean, I don’t think Joe Biden has been honest American people about that.’

It’s worth noting that it’s not clear that the deal was ever finalized.