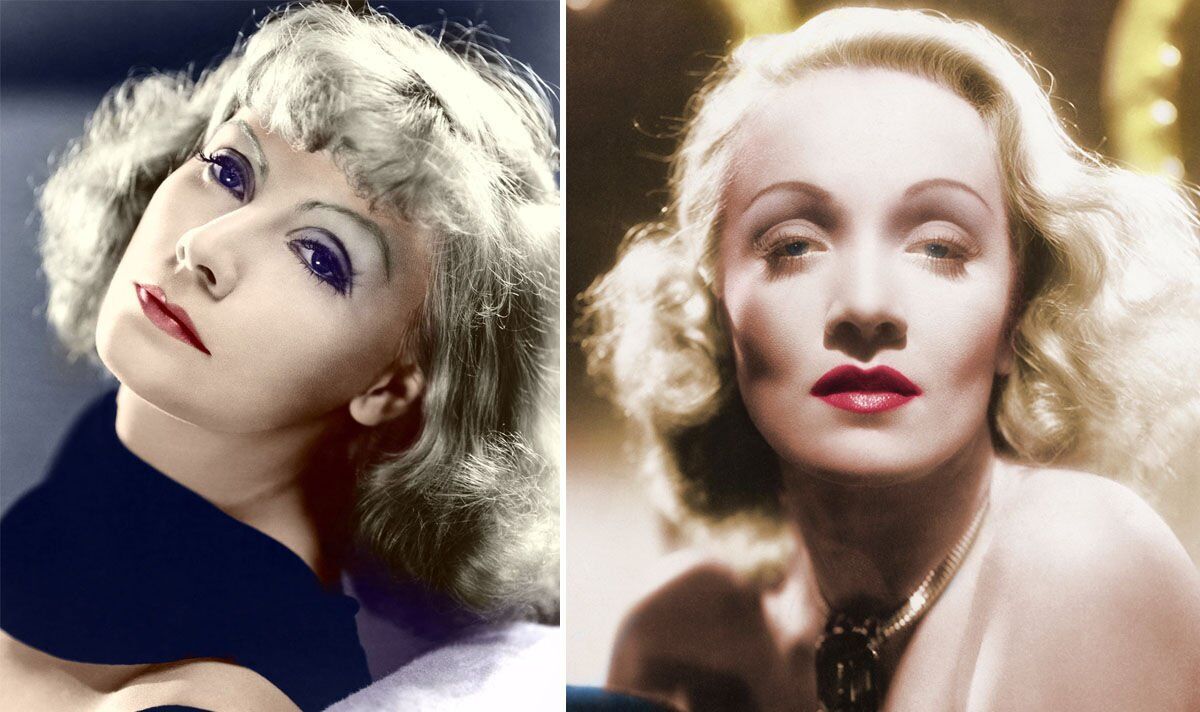 Garbo famously retired at 35 after 28 films and being the biggest female star in the world. She was the epitome of ice cool confidence and control, always an enigma, who then suddenly distanced herself from Hollywood and disappeared from the public eye. She rarely gave interviews, yet, even in her later years, she couldn’t resist one last dig at her fellow star. Asked about their rivalry, she simply replied, “Who is this Marlene Dietrich?” The German-born actress, in return, had said far more and far worse over the years.

Dietrich was known for her sexual promiscuity and equally free (and biting) tongue. Her daughter Maria Riva reported that she once cuttingly described meeting one of Garbo’s lovers at a party: “He was drunk the whole evening but if you have to go to bed with Garbo, you have to drink.”

The pair had lovers in common, like actor John Gilbert and Mercedes de Acosta. Dietrich fell head over heels for the first and was reputed to have an intimate decades-log relationship with the latter.

But an explosive book claims the two actresses had far more in common – starting with a passionate but ill-fated affair in 1920’s Berlin, just before both moved to Hollywood.

In the early 1920s Dietrich was the toast of inter-war Berlin, a hotbed of sexual liberation and exploration.

Washington Post columnist Diana McLellan wrote: “Marlene was perhaps the busiest and most passionate bisexual in theatrical Berlin… (she had) a notorious and compulsive appetite for the sexual seduction of other beautiful women.”

In her book, The Girls: Sappho Goes to Hollywood, McLellan describes how the two actresses met on the 1925 set of little known (and lost) film The Joyless Street.

At 23 and from a formerly wealthy family, Dietrich was sophisticated, confident, irresistible and rather callous. By contrast, the younger and far more naive Garbo was totally unprepared for what happened between them and its ugly end.

The Swedish actress was just 20, provincial, poor, inexperienced and very self-conscious about it all.

The two actresses always claimed never to have met in Berlin, with Dietrich denying that she appeared in The Joyless Street. But McLellan caused a sensation when she announced she had spotted the star in the remaining archived fragments of the film.

She went on to detail an affair between the two women and subsequent betrayal that destroyed their relationship forever.

Dietrich was notoriously indiscreet and cavalier with personal details about her lovers. She would often mockingly describe her lovers and their devoted declarations to her husband Rudolph Sieber, who she married in 1923.

Garbo was self-conscious at the time about her lack of refinement in manners and lifestyle, so was understandably horrified to hear that Dietrich has been publicly mocking her for wearing “dirty underclothes.”

McLellan said: “Garbo felt betrayed by a monster who spoke of her secrets, mocked her roots and sneered at her sex. She was wounded, shamed and traumatised.”

Luckily, her fortunes took a sudden and stratospheric turn when Hollywood studio boss Louis B. Mayer saw her in The Joyless Street and signed her to MGM. For the next 15 years, she was one of the acknowledged queens of the silver screen, with iconic roles in Queen Cristina, Mata Hari, Grand Hotel and Anna Karenina.

Years later, Dietrich reached out to try and apologise but Garbo refused to ever speak to her in private again.

McLellan’s claim that Dietrich appeared in The Joyless Street have subsequently been disputed, with the role attributed another actress, Hertha von Walther, but  Garbo and Dietrich’ were both in Berlin at that time and their decades-long divide remains part of Hollywood history.