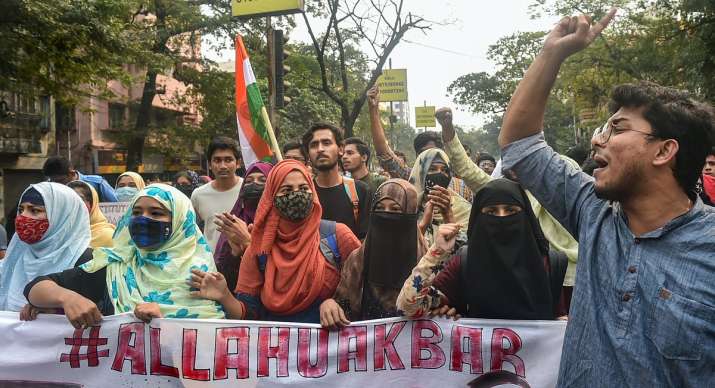 Hours after its local functionary in Uttar Pradesh backed a burqa-clad student who was heckled by youth shouting ‘Jai Shri Ram’ slogans at a Karnataka college, the RSS’ Muslim wing on Thursday distanced itself from his statement and said some fanatics are misusing her to amplify the row over ‘hijab’ to vitiate the country’s atmosphere.

In a statement, the Muslim Rashtriya Manch (MRM) categorically said that it does not support such “fanaticism and religious frenzy” and favoured the move to enforce dress code for students in educational institutions Karnataka.

In a video message, the MRM’s founder and a senior RSS leader Indresh Kumar said the ongoing row over ‘hijab’ is “a cruel and disgusting” face of the nefarious design of “some fanatics” to disturb harmony and peace in the country.

“Some fanatics are misusing Muslim daughter muskan Khan, who is always seen in jeans, to defame India and malign Islam,” he said.

He also demanded that a “through investigation” be conducted into the entire episode to expose those involved in creating a row over hijab and fanning “communal passion” to vitiate the country’s atmosphere.

Earlier in the day, Prant Sanchalak (Awadh) of the MRM Arun Singh had backed the burqa-clad student, Bibi Muskan Khan, who was recently seen being heckled by a group of youth shouting ‘Jai Shri Ram’ slogans at a Karnataka college in a viral video, saying ‘purdah’ is part of the Indian culture.

“She is the daughter and sister of our community, we stand with her at this time of crisis,” he told PTI. The MRM is an affiliate of the Rashtriya Swayamsevak Sangh (RSS) with stated objective to bring Hindus closer to Muslims.

“I want to clarify that neither Muslim Rashtriya Manch nor its chief patron Indresh Kumar supports any such thing. Some fanatics are misusing girls to amplify the row (over hijab) to vitiate the atmosphere of social harmony and peace in the country. We do not support any such fanaticism and religious frenzy,” the MRM’s national convenor and media in-charge Shahid Sayeed said in a statement. The MRM vehemently condemns and opposes such “a fanatic move”, he added

Sayeed said practice of ‘hijab’ and ‘purdah’ systems have their importance “in every religion and society” but it has no relationship with the schools, colleges, educational institutions, industrial or business sectors.

“Those, who do not do so, can not be honest to Islam and its Prophet,” he said.