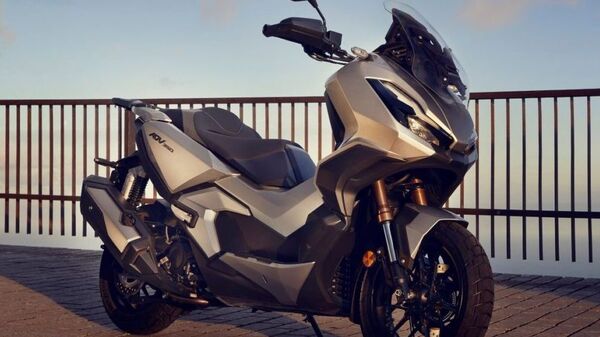 The Honda ADV350 is a rugged-looking premium scooter that features a fairly tall stance.

Honda Motorcycle and Scooter India (HMSI) has patented several two-wheelers in the market. Apart from filing a design patent for U-Go electric scooter, the company has also filed patent application for off-road maxi-scooter – the ADV350 as well as Vario 160 premium scooter. While the former, as the name suggests, is a muscular-looking adventure offering, the latter is a sport-oriented scooter that takes on the likes of the Yamaha Aerox 155.

The Honda ADV350 is a rugged-looking premium scooter that features a fairly tall stance. After making its first official debut at the EICMA 2021, the scooter was later on introduced in the international markets and gathered a positive response for its muscular styling as well as a mix of practicality with aesthetics.

At the heart of the scooter comes a 330cc liquid-cooled motor churning 28.8bhp bhp of power and 31.5Nm of torque. One of the feature highlights of the scooter include the 2-level torque control. The suspension kit on the model includes the USD telescopic front forks and twin rear shocks.

Apart from the ADV350, the company has also filed a patent for the Honda Vario 160 which is a sporty offering. It comes with an aggressive LED headlamp and body panels. At the heart of the scooter comes a 160 cc engine which delivers 15bhp of power and 13.4Nm of torque. For the record, the output of this is similar to the Aerox 155, which already sells in India.