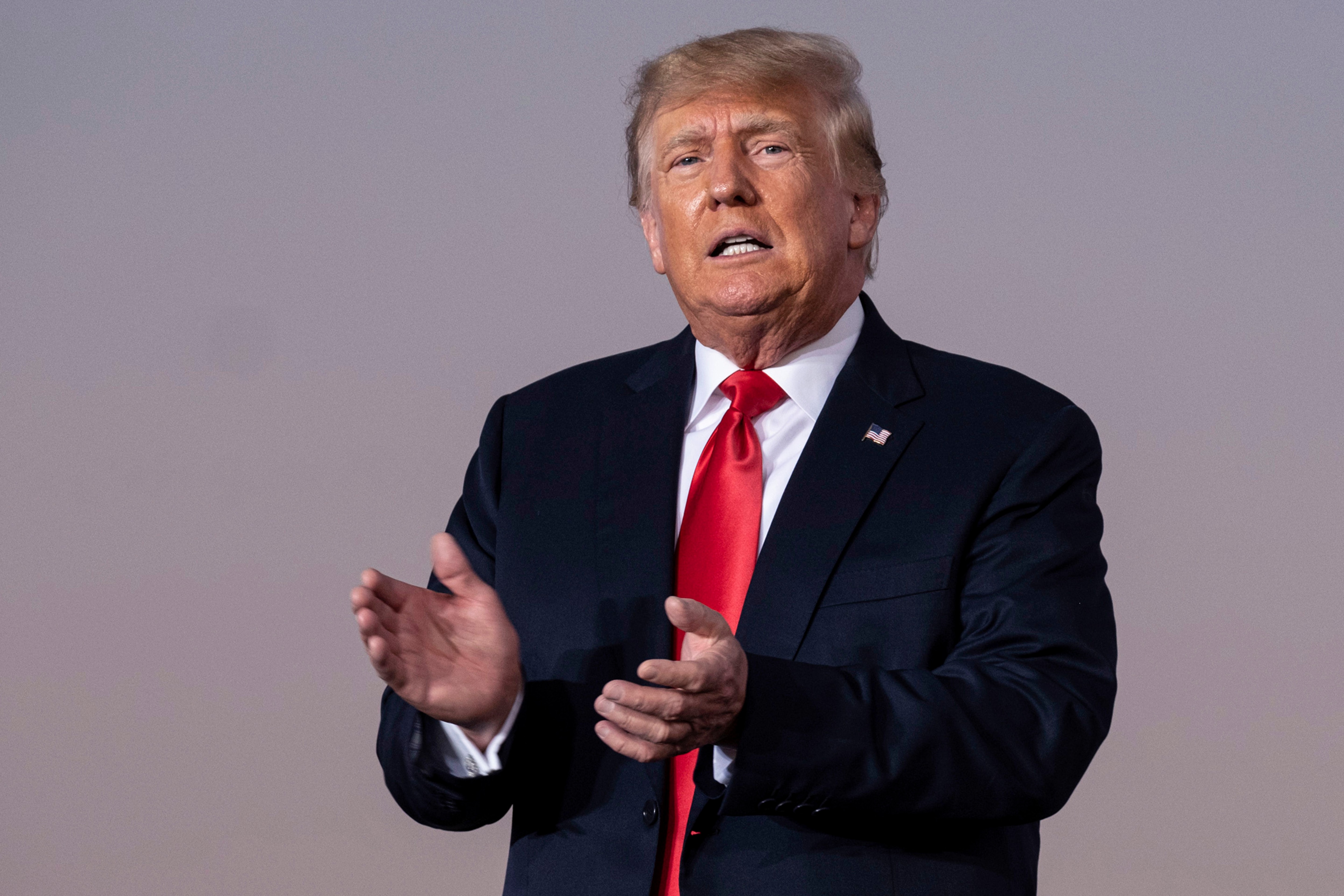 WASHINGTON – Former President Donald Trump is stepping up his election-year effort to dominate the Republican Party with a Saturday rally in Arizona in which he plans to castigate anyone who dares to question his lie that the 2020 presidential election was stolen, likely including the state’s GOP governor, Doug Ducey.

But 2,000 miles to the east in Washington, there are small signs that some Republicans are tiring of the charade. Mike Rounds, the generally unassuming senator from South Dakota, was perhaps the boldest in acknowledging the reality that the election was in fact fair. Instead of being shunned, he was supported by his GOP colleagues, including Senate Republican Leader Mitch McConnell. Rounds later said the party needed to get “ louder ” in telling voters the truth about the 2020 campaign.

Meanwhile, top Republicans in Washington have engaged in a behind-the-scenes effort to encourage Maryland Gov. Larry Hogan, one of Trump’s most vocal antagonists in the party, to run for a Senate seat. And on Saturday, Glenn Youngkin will become the first Republican since 2010 to be sworn in as Virginia’s governor after running a campaign that kept Trump at arm’s length.

Less than two months before the 2022 primary season begins, Trump remains the most popular figure among the voters who will decide which Republicans advance to the fall general election. But the recent dynamics bring new clarity to the debate that will likely animate the GOP all year: how closely GOP candidates should align themselves with Trump and his election lie.

“I was very encouraged by the response from a number of different senators supportive of Sen. Rounds,” said former New Jersey Gov. Chris Christie, who has been a rare Republican urging the party to move on from Trump and his election obsession.

There is no evidence to support Trump’s claims that the election was stolen. Elections officials and his own attorney general rejected the notion. Trump’s arguments have also been roundly rejected by the courts, including judges appointed by the former president.

Still, dissent from Trump’s election lie within the GOP remains rare. From Ohio to Georgia and Arizona, candidates running for Senate, governor and attorney general have fully embraced Trump’s falsehoods as they have tried to win over his endorsement, deflect his fury or win over his base.

In the short term, such positioning may help Republican candidates come out on top in primary fields that are often crowded. But there are concerns that it could hurt the party in the fall, especially among suburban voters who have become increasingly decisive in recent campaigns. The further to the right that Republicans go now, the easier it could become for their Democratic rivals to portray them as extreme in a general election.

And any time candidates spend looking backward is time not spent attacking President Joe Biden, who is seen as particularly vulnerable amid rising inflation and coronavirus cases.

“It’s one of those issues that’s quintessentially popular in a primary and unpopular in a general,” said Chris DeRose, a Republican attorney and former clerk of the superior court in Arizona’s Maricopa County.

He said candidates, who often privately acknowledge the election was fair, were clearly courting the former president by expressing skepticism about the 2020 election.

“Donald Trump’s obviously the most sought-after endorsement among Republican candidates,” he said. “That can make all the difference in a Republican primary.”

John Shimkus, a Republican and former Illinois congressman, said it was easy for “armchair quarterbacks” who aren’t on the ballot to judge candidates doing what they can to win their primaries.

“All the races are going to be fought by Trump and highlighted on Fox. So these candidates have to be very, very careful. They have to win the primary to win the general,” he said.

The risk, however, is clear in Arizona’s Senate race. In a year favoring Republicans, the state should be a relatively attainable pickup and some in the party are eager for Ducey to enter the race against Democratic incumbent Mark Kelly. But Trump’s repeated attacks on Ducey, who has refused to back election conspiracies, could make it hard for him to succeed in a GOP primary.

Ahead of his trip, Trump issued a statement that he would never endorse Ducey.

Whichever Republican emerges on top in Arizona and other critical races will have to convince voters that they should participate in an election system Trump has spent years deriding as rigged.

Many Republicans still blame Trump for the party’s loss of Georgia’s two Senate runoff elections in 2021, arguing he depressed turnout by insisting the election would be rigged, denying them control of the Senate. (Trump has argued that further investigation is the only way to instill confidence in future elections.)

“Trump still has this outsized voice and influence and too many candidates fear his wrath,” said Charlie Dent, a former Republican congressman from Pennsylvania and Trump critic. “We know Donald Trump will use his megaphone to condemn those who don’t buy his lies and his false narrative on the 2020 election. So these candidates are put in bind: If they tell the truth, they run the risk of losing their primaries and incurring the wrath of Trump, and if they acquiesce and go along with this nonissue, they run the risk of alienating a lot of voters.”

Still, DeRose said he has no concern that the issue will depress turnout, despite what happened in Georgia.

“The Republican base is quite enthusiastic,” he said, predicting turnout on par with 2010, when Republicans made historic gains in the House. With soaring inflation, ongoing criticism over Biden’s pullout from Afghanistan, he said, “Things aren’t going well in this country and I think you’re going to see this enormous blowback.”

Others disagreed. Barbara Comstock, a Trump critic and former GOP congresswoman from Virginia, warned Republicans risked nominating fringe candidates who would go on to lose in the general.

“Republicans feel like they’re gong to win no matter whose on the ticket. And I don’t agree with that thesis,” she said, pointing to Ohio, where Senate candidates have been trying to desperately out-Trump one another. “I think you really are taking a chance in blowing reliable races.”

Nonetheless, Trump is expected to keep hammering the issue on Saturday in Florence, Arizona, a Republican stronghold about 70 miles southeast of Phoenix. It’s the first of what aides say will be a brisker pace of Trump events in the coming months. Trump on Friday announced another rally later in January in Texas, where the March 1 primary formally ushers in the midterm campaign.