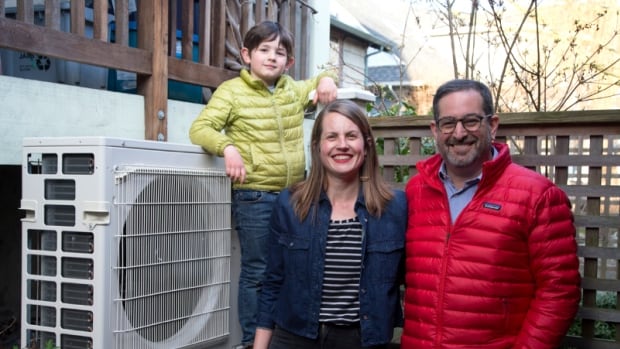 Hello, Earthlings! This is our weekly newsletter on all things environmental, where we highlight trends and solutions that are moving us to a more sustainable world. (Sign up here to get it in your inbox every Thursday.)

When Seth Klein decided to decarbonize his Vancouver home, he took advantage of some of the incentives offered to offset the cost.

Klein, an adjunct professor of urban studies at Simon Fraser University and author of A Good War: Mobilizing Canada for the Climate Emergency, installed an electric heat pump system to replace his high-efficiency gas furnace in 2020. (He’s seen in the photo above with his wife, Christine Boyle, and son Aaron.)

The size of the rebates available has increased by a few thousand dollars since then, but Klein says they “don’t yet come nearly close enough to covering the full cost.”

He suspects not many households would be able to afford to make the switch. The response to a freedom of information request to the B.C. government from a local youth climate group confirmed his suspicion — just 709 B.C. households (his included) had taken advantage of heat pump incentives in 2020.

Meanwhile, Klein notes that the province advertised incentives from the local gas company, FortisBC, offering rebates of up to $1,000 for the purchase of a new high-efficiency gas furnace, which would result in a net cost far lower than installing a heat pump system.

FortisBC announced in April 2021 that it was seeing “record participation” in its energy efficiency programs, with high-efficiency natural gas furnaces being the most popular rebate.

That’s because furnaces have a lifespan of more than a decade.

B.C. isn’t the only province where homeowners can still get rebates for new fossil fuel burning furnaces and boilers. They’re also available in P.E.I. from the provincial government; in New Brunswick from NB Power; in Ontario from Enbridge Gas; and in the Northwest Territories from the non-profit Arctic Energy Alliance. However, gas furnaces aren’t eligible for the federal Greener Homes Grant, to the disappointment of the Canadian Gas Association.

Mike Henchen, principal of the carbon-free buildings program at RMI, a U.S.-based think-tank focused on the clean energy transition, agreed that people won’t want to replace new equipment right away.

“There is a big risk there that at minimum … we’re wasting money by switching people to an efficient gas furnace and then having to switch them again real soon,” Henchen said. “Or worse, that we’re expanding the inertia of the gas system today by sinking more money into it.”

He said that applies not just to furnaces and boilers in people’s homes but gas networks that are being expanded and upgraded at customers’ expense.

We’ve written before about how energy efficiency – reducing the energy used by buildings and vehicles – is key to climate action, and how some provinces are better at it than others. But experts say that since Canada and the world have set a goal of reaching net-zero emissions by 2050, we’re going to have to decarbonize whatever we can as quickly as we can.

Klein thinks incentives are necessary, but aren’t enough to decarbonize buildings. He thinks fossil fuel heating needs to be banned after a certain deadline.

Vancouver recently took a step in that direction, partly because of the efforts of his wife, Christine Boyle, a city councillor.

Last week we asked readers to write in to tell us about sustainable housing projects they know about, whether it’s something they’re doing on their own property or a development nearby.

A number of readers wrote in to suggest the Drake Landing Solar Community, a trailblazing housing development in Okotoks, Alta., that relies on solar power and a district heating system to reduce building emissions.

You can read more about it here.

Old issues of What on Earth? are right here.

There’s also a radio show and podcast! ‘Renewable natural gas’ is touted as a way to lower the emissions from home heating and cooking. But critics say there are limits to the fuel as a climate solution. What On Earth airs Sunday at 12:30 p.m., 1 p.m. in Newfoundland. Subscribe on your favourite podcast app or hear it on demand at CBC Listen.

The Big Picture: How sustainable are the Winter Games?

There is a fascination surrounding the Winter Olympics in Beijing that goes beyond the drama of high-performance sport. For one thing, this year’s Games are being held during a pandemic, and China is sparing no resources in creating a COVID-proof cocoon. Another subplot is the extent to which the country is simulating the necessary conditions to stage some of the outdoor events.

While a tweet about a ski jump built next to a pair of nuclear cooling towers in west Beijing went viral, the bigger story may be the appropriateness of holding the Winter Games in a region that rarely dips below 0 C at this time of year. Time magazine reported that 100 per cent of the snow at these Games is artificial, and creating enough of it to blanket the ski hills and access roads requires exorbitant amounts of water and energy. China has estimated it requires 185 million gallons of water (or the equivalent of 74 Olympic-sized swimming pools), but some experts peg it at more like 7.5 billion litres (or 800 Olympic pools).

Snow-making is hardly novel at the Olympics — first introduced at the 1980 Games in Lake Placid, N.Y., artificial snow made up the lion’s share of the white stuff in Sochi, Russia, in 2014 (80 per cent) and Pyeongchang, South Korea, in 2018 (up to 98 per cent). The wisdom of locating these Olympics in Beijing is part of a larger conversation about the viability of staging Winter Games in an increasingly warming world. A recent study found cities that have hosted Winter Olympics have seen drastic warming in the last few decades.

Hot and bothered: Provocative ideas from around the web

Tesla owner Krista Rigby, who lives in Amherstburg, Ont., would like options on where to go to service her vehicle, but the electric vehicle company is one of many that doesn’t share repair or update information with smaller auto repair shops.

“I would like the option to be able to go somewhere local,” she said. “It would be easier to just pop into somewhere in Amherstburg or Windsor to have it looked at.”

Last Friday, Windsor West NDP MP Brian Masse introduced a right to repair automotive vehicles private member’s bill in Parliament. The law, according to Masse, would include a set of rules that big auto manufacturers would use to share the software and training they use to repair their products.

Masse said this would give people more options on where to take their vehicle and will drive competition among auto shops.

“[I’ve heard from] consumers … where they took a vehicle to their local shop and it couldn’t get fixed properly and they had to then take it somewhere else.”

Masse proposed similar legislation in 2009, but the industry decided on a voluntary agreement instead. Since it was voluntary, not all companies have chosen to share their information, Masse said.

Now, with the amount of digital technology that has gone into vehicles, Masse said this new legislation would push the voluntary agreement forward.

“Back in 2009, we didn’t have the same type of electric vehicles that we have today and some of the changes that we see … are quite dramatic for the industry, so this helps modernize that.”

Dave Santing, who owns an OK Tire Auto Service shop in Windsor, said he thinks the sharing of information would be good for business.

“It’s going to allow us to get all the information and technology for repair work on vehicles of the future. It will help us maintain staff, which will need to be educated, so it will help our trades, as well as give the consumer an opportunity to choose where they’d like to have their vehicles repaired,” he said.

This sort of legislation is also being looked at in the United States. Last week, Reuters reported that U.S. lawmakers were introducing these sorts of laws for vehicles, electronic devices and agriculture equipment.

Pino Mastroianni, president of the Electric Vehicle Society of Windsor-Essex, said he hasn’t heard demand for something like this just yet within the EV community.

But as more people buy EVs and the Canadian government aims for all vehicles sold by 2035 to be zero emission, he said it would be beneficial to have more shops with the know-how to fix them — especially as the warranty wears off.

“There will soon be a demand for repair, whether it’s after-market or at the dealers, so … we need to start preparing for the future to educate and train today’s and future mechanics to make these repairs,” he said.

But Peter Frise, an automotive engineering professor at the University of Windsor, told CBC News that big auto companies might not want this type of legislation.

“It costs billions of dollars to develop [vehicle] technologies and [the companies] have to be able to recover that investment somehow,” he said.

“In the process of developing that new technology, the car companies develop a lot of intellectual property — software, know-how, new materials, new manufacturing techniques, new design methodologies — and they’re reluctant to just put that out into the public, because then other companies could just get it.”

He added that product liability is another big concern, as the company could be at fault “if people who are not authorized or who are not experts and do not have the tools and skills needed try to work on one of their products.”

Frise also mentioned that the costs taken on by local repair shops — those associated with purchasing the software and hiring or training staff on the new technology — will likely be ones that the consumer ends up absorbing.

He added that laws such as this are complex and need to be looked at from many angles.

Masse said he is planning to reach out to major auto companies.

Are there issues you’d like us to cover? Questions you want answered? Do you just want to share a kind word? We’d love to hear from you. Email us at whatonearth@cbc.ca.

Sign up here to get What on Earth? in your inbox every Thursday.