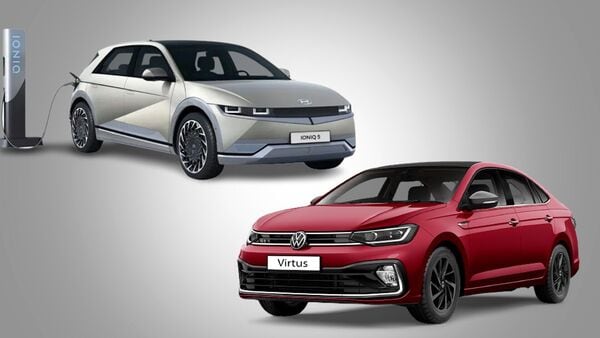 Besides the new Volkswagen Virtus, which will launch on June 9, at least five more cars are expected to make their debuts in India next month.

Six new cars, which include one electric vehicle and four new SUVs, are expected to launch in India in June. Volkswagen Virtus, the latest entrant in the premium sedan segment rivalling Honda City, Skoda Slavia, Maruti Ciaz and Hyundai Verna, will be officially launched in the same month as well. While four carmakers have confirmed their launch dates or unveiling plans, one more is also expected to announce its date soon.

German carmaker Volkswagen will officially announce the price of its upcoming premium sedan Virtus on June 9. It is going to be one of the first launches of the month. Virtus is the carmaker’s second product under the India 2.0 project and is based on the MQB A0 IN platform. It is also the longest car in the segment with 4,561 mm length and largest boot space in its segment with 521 litres.

The car will be offered with a 1.5-litre TSI EVO engine with Active Cylinder Technology (ACT). It will also get a 1.0-litre TSI engine option. Both will come equipped with idle Start/Stop systemn and mated to a range of gearbox options including a 6-speed manual, 6-speed automatic torque converter, or 7-speed DSG transmission option.

2022 C3 SUV, which is going to be the French carmaker’s second model to launch in India after the C5 Aircross SUV, is likely to make its debut next month. The official launch too is likely to take place in June. The small SUV, which is expected to be an affordable offering rivalling the likes of Tata Punch, was unveiled by Citroen last year.

Citroen C3 is based on the Common Modular Platform (CMP) with a wheelbase that measures 2,540 mm. Citroen promises that the passengers sitting in the rear seats too will have ‘one of the best legroom in the segment’. For the rear seats, there is 653 mm of legroom. Up front, there’s 1418 mm for the elbows and 991 mm for headroom. The SUV also promises to offer ample storage space. It has a boot space which can hold 315 litres of luggage.

Citroen is likely to pack the C3 with two choices of petrol engines. Besides a 1.2-litre naturally aspirated engine, Citroen may offer a 1.0-litre turbocharged unit as well.

The new Ioniq 5 will come out as part of the company’s plans to launch six electric vehicles in India by 2028. It will be launched in the country as a CKD model and will come based on the firm’s Electric Global Modular Platform (E-GMP).

Maruti is likely to bring in yet another car for the Indian market. The long-awaited new generation Vitara Brezza is likely to be launched next month. Though Maruti has not confirmed any dates, it is likely to take place towards the end of the month.

Maruti is likely to upgrade the design of the SUV to make it appear more stylish. The carmaker is also expected to introduce new features which are currently in use in its latest models. These may include 360 degree camera, wireless charging, a new touchscreen infotainment screen among others.

Maruti may also use the new K15C series 1.5-litre petrol engine capable of producing power of 103 bhp and a maximum torque of 138 Nm. The engine is likely to be mated to the new six-speed automatic transmission besides the regular five-speed gearbox.

According to reports, Hyundai will not wait longer to launch its Brezza rival either. The Venue sub-compact SUV is one of the best-selling models in its category. The SUV, which has been developed for global markets already, is likely to launch towards the end of next month.