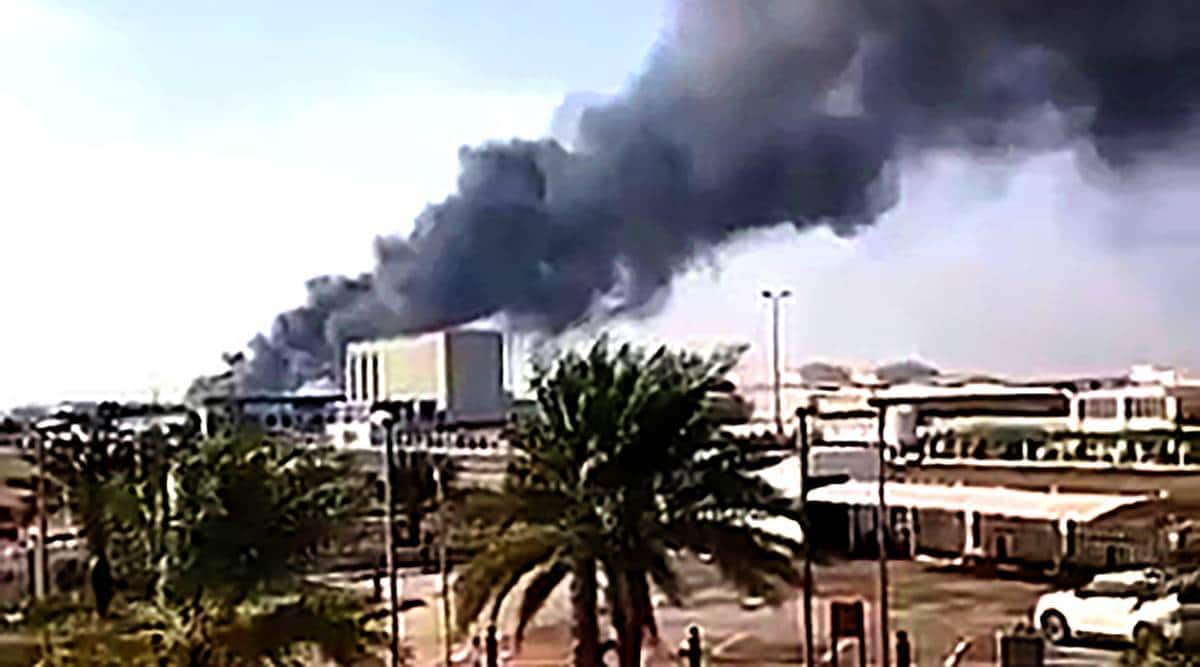 The two Indians killed in the suspected drone strike in Abu Dhabi Monday have been identified, informed the Indian Embassy in UAE Tuesday morning. It added that two of the six injured in the attack are also Indians.

The embassy tweeted, “Identities of 2 deceased Indian nationals established.” It added that the embassy officials “are in touch with their family members. The Mission is working closely with UAE authorities, including ADNOC, for early repatriation of mortal remains”.

Of the 6 injured, 2 are Indian nationals. After receiving medical treatment they were discharged yesterday night.
We thank the UAE Government @MoFAICUAE & @AdnocGroup for their support. @DrSJaishankar @MEAIndia @cgidubai @IndianDiplomacy @vipulifs @PMOIndia @IndiaUNNewYork (2/2)

On Monday afternoon, two Indians were among three people killed in a suspected drone attack. A Pakistani national was also among the casualties.

The Indian Embassy in another tweet Tuesday said of the “6 injured, 2 are Indian nationals. After receiving medical treatment they were discharged yesterday night.”

The incident had taken place Monday around 10 am. Abu Dhabi National Oil Company (ADNOC) had said in a statement that at around 10 in the morning “an incident occurred at our Mussafah Fuel Depot in Abu Dhabi which resulted in the outbreak of a fire”.

It mentioned that emergency response teams, including civil defence, fire ambulance responders as well as an ADNOC emergency response team quickly attended the scene and the fire was extinguished. It also informed three people had died in the incident and six were injured who received “immediate specialist medical care”.

It mentioned that it is “working closely with the relevant authorities to determine the exact cause and a detailed investigation has commenced”.

A PTI report mentioned Monday that the UAE didn’t immediately blame anyone for the attack but Houthi military spokesman Yahia Sarei said the group launched an attack “deep in the UAE”. Although he did not provide further details, he said a statement would soon be released.

Another minor fire broke out in the new construction area of the Abu Dhabi International Airport, according to the state-run Emirates News Agency.

According to a Reuters report, the Abu Dhabi Police said in a statement that “initial investigations found parts of a small plane that could possibly be a drone at both sites that could have caused the explosion and the fire”.

Indians are the largest ethnic group in the UAE, with an expatriate community of around 3.5 million. Indians account for nearly 30 per cent of the country’s population and approximately 15 per cent of the diaspora is in the Emirate of Abu Dhabi, according to the Indian Embassy in UAE.

Yemen’s Houthi group has taken responsibility for several attacks on Saudi Arabian oil facilities in the past. The UAE is a part of the Saudi-led coalition in Yemen fighting Houthi rebels.