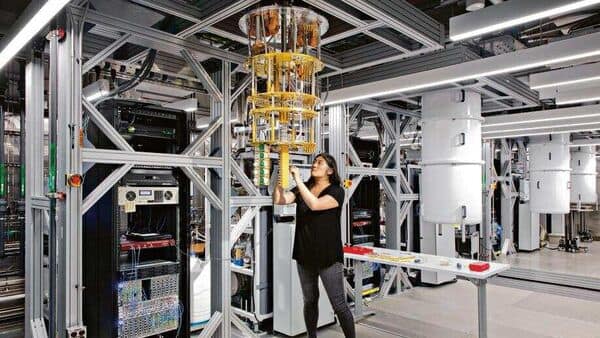 Given the million possibilities, Jitesh Lalwani, founder and CEO of Artificial Brain Tech Inc., believes quantum computing can provide the answers. His company, based in the US and Pune, has developed an algorithm that leverages the power of quantum computing accessed via cloud.

“The algorithm solves this problem by considering the point of interest and already existing electric charging locations and then optimally placing new charging points to cover as many people as possible,” says Lalwani.

But why not use high-performance computers (HPCs) for the task? HPCs process data and perform complex calculations at high speeds. “These are very complex problems that classical computers (conventional ones we use in our everyday lives such as laptops, desktops, and even HPCs) are not capable of solving. And even if they do, it will take them millions of years,” he explains.

Artificial Brain now plans to modify this quantum algorithm to find optimal locations for wind and solar farms, too.

These two startups underline that quantum computing is no longer an esoteric science confined to research labs—it is beginning to find business applications. More of this later. First, let’s demystify the quantum computer.

The computers we see and use in our homes and offices today process information with bits (ones and zeroes). They are referred to as classical or conventional computers. Quantum computers, on the other hand, use quantum bits or qubits that can process the ones and zeroes simultaneously due to a property known as superposition which allows them to process a lot more information than traditional computers. In October 2019, Google said it had performed a calculation on a quantum processor in 300 seconds that would have been practically impossible to achieve with the algorithms available at the time. The report was published in Nature magazine.

Quantum computing also rides on ‘quantum entanglement’, a property that Albert Einstein referred to as “spooky action at a distance” since it allows quantum particles to connect regardless of their location in the universe.

On 27 January, scientists from two premier Ahmedabad-based laboratories of the Department of Space—the Space Applications Centre and Physical Research Laboratory—jointly demonstrated quantum entanglement with real-time Quantum Key Distribution (QKD) between two buildings separated by a distance of 300 metres. QKD allows any two parties to generate random secret keys that can be shared exclusively to encrypt and decrypt messages. This makes the communication very secure, especially vital for defence and strategic agencies across the globe.

Companies like International Business Machines Corp. (IBM), D-Wave Systems, Google, Microsoft, Amazon, Nvidia, and Intel have begun providing cloud-based quantum services. IBM has built over 30 quantum computers in the last four-five years, of which over 20 are active right now with IBM providing access to them through the IBM Cloud. However, while most tech companies use the quantum gate approach (similar to logic gates in conventional computers), D-Wave uses both ‘quantum annealing’ and quantum gates.

Also referred to as adiabatic quantum computing, D-Wave’s quantum annealing approach can determine the lowest energy state of a system using the superposition property of qubits. The University of Southern California Information Sciences Institute (USC-ISI), for instance, has used D-Wave’s quantum computer to advance data analysis for the discovery of Higgs bosons, and methods for doing error correction with quantum annealing. Informally known as the ‘God Particle’, the Higgs bosons is the fundamental particle associated with the Higgs field, responsible for giving other fundamental particles their mass.

And all companies are focused on adding more qubits. While IBM aims to launch a 4,000-qubit quantum computer by 2025, D-Wave’s Advantage2 system is expected to feature 7,000 qubits with a new qubit design. However, given that both these companies (IBM’s gate-based Vs D-Wave’s annealing approach) are building these computers with different technologies, it’s not fair to compare these two approaches. “It’s better to have options for different objects and implementations,” says Federico Spedalieri, research assistant professor at USC-ISI.

Google’s parent Alphabet, meanwhile, is building advanced quantum computing hardware with a focus on developing quantum AI. Alphabet also has a dedicated “secretive” team working on quantum tech, which it has now spun off into a separate company called SandboxAQ with AQ standing for ‘AI and Quantum’. Google plans to have a one million qubit quantum computer ready by 2030.

Microsoft, on its part, offers access to quantum computers from numerous makers on its Azure cloud platform, while Intel is developing its own silicon-based quantum computing hardware.

How is India placed?

The quantum ecosystem in India is growing at an accelerated pace with support from government agencies and participation from the academia, service providers, and the startup community, points out a report titled The Quantum Revolution in India, which was jointly published by Nasscom and management consulting firm Avasant this February.

India, for instance, plans to develop a quantum computer with about 50 qubits by 2026. India also has a Quantum Simulator platform built by the Indian Institute of Sciences (IISc), Bengaluru, Indian Institute of Technology (IIT)-Roorkee, and Pune-based Centre for Development of Advanced Computing (C-DAC), which allows users to do quantum simulation using computing resources from C-DAC’s high-performance computers like PARAM Shavak and PARAM Siddhi.

In a recent interview to Mint, Murray Thom, vice president of product management at D-Wave, underscored that with over 25,000 users, India has the third highest quantum cloud service sign-ups since it began providing access to users like Lalwani in India in 2020.

Dario Gil, senior VP and director of IBM Research, too, pointed out in an interview to Mint that IBM is having “many conversations right now with some IITs and leading centres for training to develop a curriculum and certification. The Qiskit (a software development kit in Python used to programme quantum computers) textbook is now also available in Tamil, Bengali and Hindi”.

Indian IT services providers, too, are getting their feet wet in this space. Last September, Infosys said it is partnering with Amazon Web Services to develop quantum computing capabilities. This April, Tech Mahindra’s research and development arm, Makers Lab, announced it has set up a quantum centre of excellence called QNxT in Finland to leverage the country’s expertise in quantum computing. It also plans to set up quantum centres in Pune and Hyderabad to explore applications in sectors like telecom, 5G, energy, and healthcare.

The adoption of quantum technologies across industries could thus potentially add $280–310 billion of value to the Indian economy by 2030, with the manufacturing, high-tech, banking, and defence sectors at the forefront of quantum-led innovation, according to the Nasscom-Avasant report.

Globally, IBM is working with the likes of JP Morgan Chase, Goldman Sachs, Wells Fargo, Mizuho Bank, Daimler, energy companies, and some materials companies, according to Gario. Sectors such as pharmaceuticals, chemicals, automotive, and finance could see short-term benefits of anywhere between $300 billion and $700 billion in value from the technology, according to a December 2021 report by McKinsey and Co., titled Quantum computing: An emerging ecosystem and industry use cases.

Before quantum computers can solve business problems better than classical computers (known as the ‘quantum advantage’) or even those that the former cannot solve (called ‘quantum supremacy’), many hurdles have to be overcome.

For one, quantum computers are highly prone to interference that leads to errors in quantum algorithms running on it. According to the McKinsey report cited above, while multiple quantum-computing hardware platforms are being developed, it will be important to achieve “fully error-corrected, fault-tolerant quantum computing, without which a quantum computer cannot provide exact, mathematically accurate results”. That said, some companies, including Google, have announced plans to have fault-tolerant quantum-computing hardware by 2030.

Second, most quantum computers cannot function without being super-cooled to a little above absolute zero since heat generates error or noise in qubits. But this June, the Pawsey Supercomputing Research Centre in Perth said it is working with German-Australian startup Quantum Brilliance to test the latter’s two-qubit diamond quantum ‘accelerator’ that uses synthetic diamonds and runs at room temperature in any environment. The Centre is currently testing it by pairing it with their new state-of-the-art supercomputer, Setonix. Running quantum computers at room temperature may prove a game changer.

Finding the right talent is another big hurdle. The National Mission on Quantum Technologies and Applications (NM-QTA), a government of India programme, aims to create a workforce of over 25,000 in India over the next five to seven years, but there is an acute shortage of candidates with doctorates in quantum physics, engineering, and statistics.

That said, the Defence Institute of Advanced Technology (DIAT) in Pune, launched an MTech in quantum computing in 2020. IISc Bangalore followed by offering the same course a year later. IBM has partnered with top-tier academic institutions in India to provide access to IBM quantum systems, while Microsoft Garage India has joined hands with IIT Roorkee to conduct lectures on quantum computing for an entire semester.

Startups are pitching in, too. QpiAI, a startup that leverages quantum computing and AI to offer solutions to different industries, offers a module-based study for AI and quantum certification, while Qulabs Software, another quantum solutions firm, offers six-month internship projects at the company.

Others like Sumant Parimal, founding partner of research and advisory firm Innogress, are focusing on building the ecosystem. Innogress plans to set up the Greater Karnavati Quantum Computing Technology Park in Gujarat to enable everything from “R&D to design and engineering, simulation to testing and manufacturing to packaging and skilling”.

“We are talking to potential technology partners and investors. It will require an initial capex of around $300 million. It’s a 5–10-year road map,” says Parimal.

He has a point. China and the European Union rank first and second on public funding for quantum computing with investments of $15 billion and $7.2 billion, respectively, according to a McKinsey report. The US, the UK, and India follow at a distant third, fourth and fifth place, respectively, with a little over $1 billion each.

To be sure, the Indian government did announce NM-QTA with a total budget outlay of ₹8,000 crore for a period of five years to be implemented by the department of science and technology in 2020 but it is yet to get Cabinet clearance.

Despite these hurdles, quantum computing is set to grow but is likely to see a hybrid computing-operating model that combines conventional computing with emerging quantum computing before the latter comes of age. As the McKinsey report puts it: “Change may come as early as 2030, as several companies predict they will launch usable quantum systems by that time.”

It also advises companies to start formulating “their quantum computing strategies, especially in industries such as pharmaceuticals that may reap the early benefits of commercial quantum computing”.