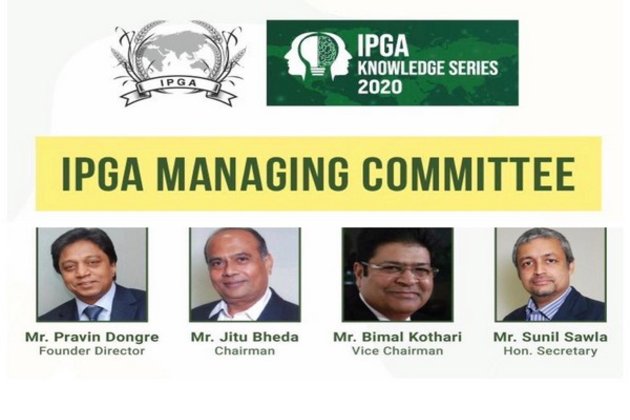 The webinar, moderated by Anurag Tulshan, IPGA East Zone Convenor and Managing Director Esarco Exim was attended by close to 800 participants from across 30 countries. The webinar had a focused discussion on key aspects like production of forthcoming Lentils crop, trade’s perspective of stock availability, expected imports as well as price outlook.

“A focused discussion on lentils was need of the hour for industry and trade especially considering the forthcoming season. We had a very insightful session covering key aspects around expected domestic production, trade’s perspective of stock availability, expected imports as well as price outlook including insights into government perspectives and NAFED’s plans regarding lentils as well as a detailed overview of lentils markets in Canada and Australia,” said Jitu Bheda, Chairman, IPGA.

“Sowing has happened in 3.70 lakh Ha of land as on date out of the targeted 1.40 million Ha sowing for Lentils. The production target has been set at 1.60 million tons. The speed of sowing has doubled this year thanks to excellent ground moisture availability and 80 per cent or our 120 reservoirs are full to almost 80 per cent of their capacity. With a view to achieve this, 1.30 lakh mini kits with high-yield and bio-fortified variety seeds have reached farmers and over 20,000 cluster demos are underway,” said Dr S K Malhotra, Agriculture Commissioner, Ministry of Agriculture, while speaking in the webinar.

“Pulses and Oilseeds have been identified as priority sectors and Niti Aayog is also in the process of preparing a long-term policy framework on supply chain for Pulses. The Government’s focus is on productivity-led growth rather than area-led growth and on the smaller crops where volume was less but equally important crops, especially in Pulses with a special focus on Lentils,” Dr Malhotra added.

“We have sufficient funds, infrastructure and will to buy every grain available at the farmgate if the prices were to drop below the Rs 51,000 per metric ton MSP. This year advance arrangements have been made to ensure that no farmer would be deprived of the MSP declared by the Government on account of procurement,” said Sunil Kumar Singh, Addl. Managing Director – NAFED.

“Lentils has become a highly traded commodity and India imported around 7.50 lakh tons red lentils last year and we expect around 1.05 million tons to be imported by end of March 2021. The prices are expected to remain in the Rs 51,000 to Rs 53,000 per metric ton in the western India like Mumbai, Hazira, etc. If the Government increases the duty post-December, the prices could go up by Rs 3,000 to Rs 4,000 per metric ton in the port areas. If the harvest goes fine and the production is at 1.60 million tons, the post-harvest prices in the port area could go down back to about Rs 50,000 to Rs 51,000 per metric ton,” said Rakesh Khemka, Managing Director, Uma Exports speaking on the domestic scenario for Lentils.

Rav Kapoor, CEO and Director, ETG Commodities Inc., Canada speaking on the Canadian scenario of Lentils said, “This year Canada has 9.01 lakh tons of Green Lentils stock and around 2.03 million tons of Red Lentils. Kapoor expects Canada to export around 1 lakh Green and around 6 to 7 lakh tons of Red Lentils to India. Considering exports to other countries, Canada will be left with around 110,000 tons of Red Lentils by August 2021. However, if demand from Turkey, Sudan, Ethiopia, and UAE increases, then Canada may not be left with any carry-forward stock by August 2021.””Canadian farmer will not participate in the markets aggressively till after April 2021 when the situation of India’s Lentil crop is clear. We do not expect any drop in Canadian Lentil price till atleast March 2021. We expect a spike of USD 100 per metric ton in prices if demand from Turkey, Bangladesh and other markets increases. As of now the prices are in the USD 600 to USD 625 per metric ton CNF range,” said Kapoor, while speaking on the price front.

Peter Wilson, Managing Director, Wilson International Trade, a Board Member of Pulse Australia Limited and a veteran of the Australian Pulses Trade speaking about the Australian Lentils scenario said, “Over the last 30 years the Australian farmers have developed the capacity to hold the product on their farms with excellent storage facilities. So, we do not see Australian farmers being in a hurry to sell their harvest as they have the capacity to hold it.””This year, Australia has a total availability of 861,000 tons of lentils and expects to export around 750,000 tons. Apart from India, we expect Turkey to be a big importer. As of now, even before the harvest, about 25 per cent to 30 per cent of the crop has already been traded and prices have been in the early USD 600 per metric ton range,” Wilson added.

“With Canada having completed their Lentils harvest, Australia about to start their harvest and India due to start sowing, this was the best time to host this webinar as the Indian trade needed a holistic view of the overall situation,” said Anurag Tulshan, IPGA East Zone Convenor and moderator of the Lentils webinar.

The Lentils webinar can be viewed at https://youtu.be/yiIIies0qyM. You can also visit the IPGA Knowledge Series section of IPGA’s website www.ipga.co.in to view the webinar video as well as the presentations of the speakers.

IPGA will soon announce the date and topic of their next webinar under THE IPGA KNOWLEDGE SERIES.