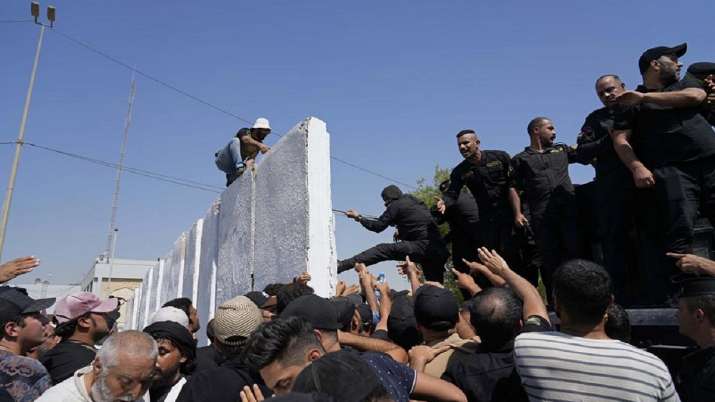 Iraq clashes: At least 15 protestors were shot dead in Iraq’s Baghdad city on Monday after clashes broke out at the government palace. The clashes took place between security forces and angry followers loyal to influential Shiite cleric Muqtada al-Sadr after he announced his resignation from Iraqi politics.

Cement barriers outside the government palace were pulled down with ropes and the palace gates were breached. Many protestors rushed into the lavish salons and marbled halls of the palace, a key meeting place for Iraqi heads of state and foreign dignitaries. Iraq’s caretaker premier said he would open an investigation into the shootings and said the use of live ammunition against protesters was forbidden.

Protests also broke out in the Shiite-majority southern provinces, with al-Sadr’s supporters burning tires and blocking roads in the oil-rich province of Basra and hundreds demonstrating outside the governorate building in Missan.

Iraq’s military announced a nationwide curfew, and the caretaker premier suspended Cabinet sessions in response to the violence. Medical officials said dozens of protesters were wounded by gunfire and tear gas and physical altercations with riot police.

Saraya Salam, a militia aligned with al-Sadr clashed with the Popular Mobilization Forces security group. A small force from the special forces division and Iraqi Army’s 9th Division also joined to contain the militants as the clashes continued for hours inside the Green Zone, the seat of Iraq’s government. At least one soldier from the special forces division, which is responsible for security in the Green Zone, was killed. Many others, including a civilian woman, were wounded, two security officials said. Several mortar rounds were heard.

Iraq’s government has been deadlocked since al-Sadr’s party won the largest share of seats in October parliamentary elections but not enough to secure a majority government. His refusal to negotiate with his Iran-backed Shiite rivals and subsequent exit from the talks has catapulted the country into political uncertainty and volatility amid intensifying intra-Shiite wrangling.

Iraq’s majority Muslim population is split into two sects, Shiites and Sunnis. Under Saddam Hussein, the Shiites were oppressed until the U.S.-led invasion reversed the political order. Now the Shiites are fighting among themselves, with the dispute centering around power and state resources but also influence over the Shiite street.

To further his political interests, al-Sadr has wrapped his rhetoric with a nationalist and reform agenda that resonates powerfully among his broad grassroots base of supporters who hail from Iraq’s poorest sectors of society and have historically been shut out from the political system.

Many were first followers of his father, a revered figure in Shiite Islam. They are calling for the dissolution of parliament and early elections without the participation of Iran-backed Shiite groups, which they see as responsible for the status quo.