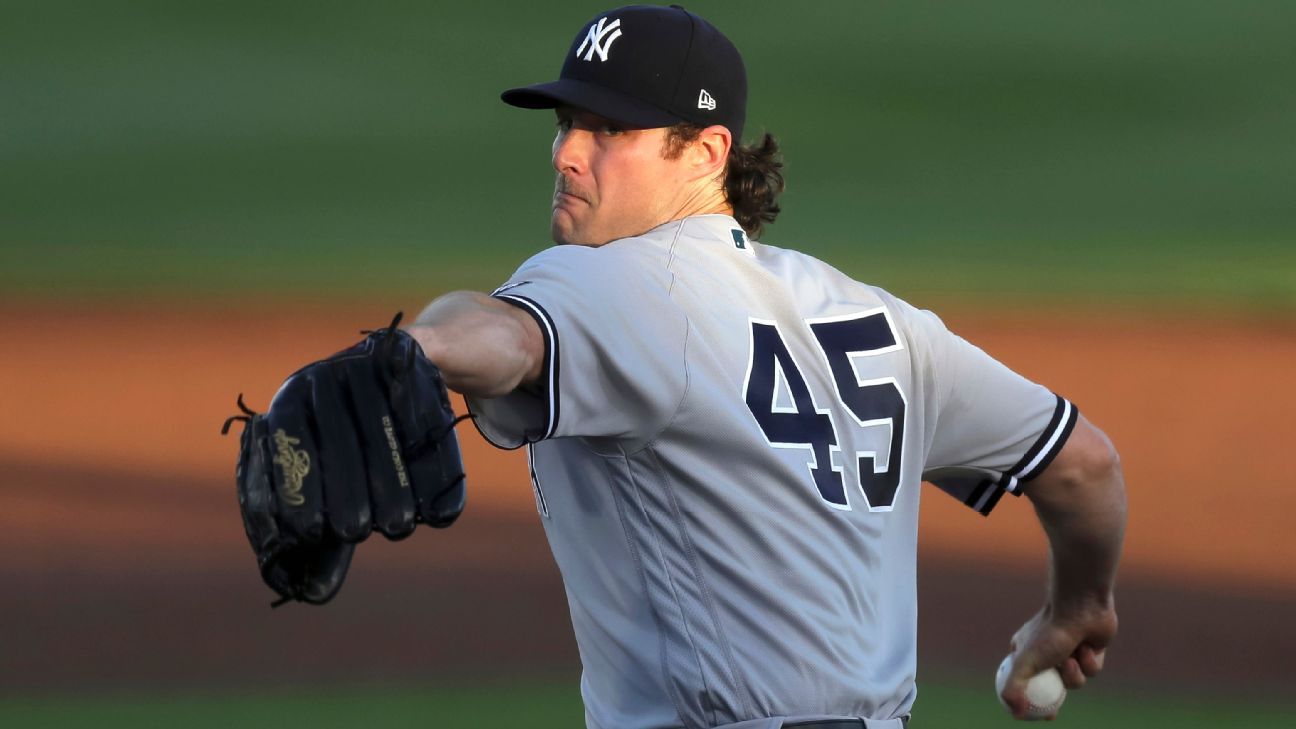 Early on in his start Monday night against the Toronto Blue Jays on a clear evening in Dunedin, Florida, New York Yankees ace Gerrit Cole was fighting to get in a good groove. He allowed a run in the first inning on two opposite-field ground-ball singles and an infield groundout, but it was more the frustration visible on his face as he left a couple of breaking balls up in the zone that suggested the Jays better get to him when they had a chance.

Toronto got the first two runners on in the bottom of the second, a golden opportunity to stretch that early lead. Cole then found that groove exactly when he needed it. He fanned Alejandro Kirk on three pitches, getting him looking on a slider at the bottom of the zone. He struck out Josh Palacios swinging on a 98 mph heater above the top of the zone. He struck out Marcus Semien swinging on a 2-2 changeup on the outside corner. Three different pitches — slider, fastball, changeup — all in great locations.

The Blue Jays had let Cole off the hook. He jumped off the mound after striking out Semien, sprinted to the dugout and cooled himself in front of a big fan. Cole threw 43 pitches the first two innings, but found his fastball command, tightened up the slider and retired the final 15 batters he faced, settling for eight strikeouts and three hits allowed over six innings, as the Yankees won 3-1 with catcher Kyle Higashioka driving in all three runs on two home runs. He needed just 55 pitches to get through the next four innings and on his 98th and final pitch, Cole painted the black with a 99.2 mph fastball.

“I just thought we settled in, really nothing more than that,” Cole said. “Some big misfires in the first, but not a ton of bad pitches in the strike zone. In the second, a much better grouping of pitches, kind of a combination of sliders early and a solid approach.”

This is the story of the Yankees 10 games into the season: Cole looks every bit like one of the top three starting pitchers in the game. The rest of the Yankees rotation, however, remains a huge question mark. Domingo German, who started New York’s third game of the season, was already relegated to the team’s alternate site after allowing four home runs in two rough outings. Jordan Montgomery had an excellent first start and then allowed two home runs and hit two batters in a so-so second start. Corey Kluber has struggled with command and is still seeking pre-injury velocity and spin rates.

Cole has a 1.47 ERA in three starts while the other starters have combined for a 5.28 ERA. All small sample size stuff, of course, and Jameson Taillon, who has the upside of a No. 2 starter, has yet to make his second start. Still, nothing in the early going has settled the concerns of Yankees fans on how everybody lines behind Cole.

Can the Yankees meet their preseason projection of 95 wins — or more — without a solid, reliable No. 2 starter? It’s an important question because the gap between 95 wins and, say, 90 wins is obviously significant. A 95-win season makes the Yankees heavy favorites to win the AL East; drop down to 90 wins and the Rays, Blue Jays and perhaps even the Red Sox are much more likely to be breathing down their necks.

I looked at all the teams to win at least 95 wins from 2010 to 2019 — that’s 42 teams — and checked the value of their No. 1 and No. 2 starters, based strictly on Baseball-Reference WAR and not on games started or innings pitched (looking for quality over quantity). There are two results to consider here: The difference in WAR between the top two starters and the combined WAR of the top two starters.

Let’s start with the latter. The 42 teams averaged 8.6 WAR from their top two starters – I was a little surprised it wasn’t higher. A 2-WAR pitcher is about a league average starter, so we’re looking at, on average, four to five wins above average between the top two starters for our 95-win teams. The top five and bottom five totals on this list:

The average gap between the No. 1 and 2 starters for our 95-win teams was 1.6 WAR. Cole was worth 6.7 WAR his final season with the Astros in 2019, so he reasonably projects as a 6-win pitcher in 2021. There is likewise a reasonable belief that the No. 2 starter for the Yankees will not be a 4-win pitcher, so if Taillon or whoever ends up as their No. 2 is a league-average pitcher, that’s a potential 4-WAR difference from Cole. The top five biggest differences from our teams in the study:

Is there anything to conclude from this? It’s true that the drop from Cole to the Yankees’ No. 2 starter could be rather exceptional for a 95-win team … which suggests, if nobody steps up behind Cole, the Yankees are likely to win fewer than 95 games. On the other hand, Cole plus a league-average No. 2 is historically good enough to front a 95-win team.

Maybe the best answer is this: It’s the rotation depth that will be the ultimate arbiter of how many games the Yankees win (assuming a high-powered offense, which we should note has yet to kick into gear). As he showed on Monday, Gerrit Cole will be great if he stays healthy. We still have a lot to learn about Kluber and company though.