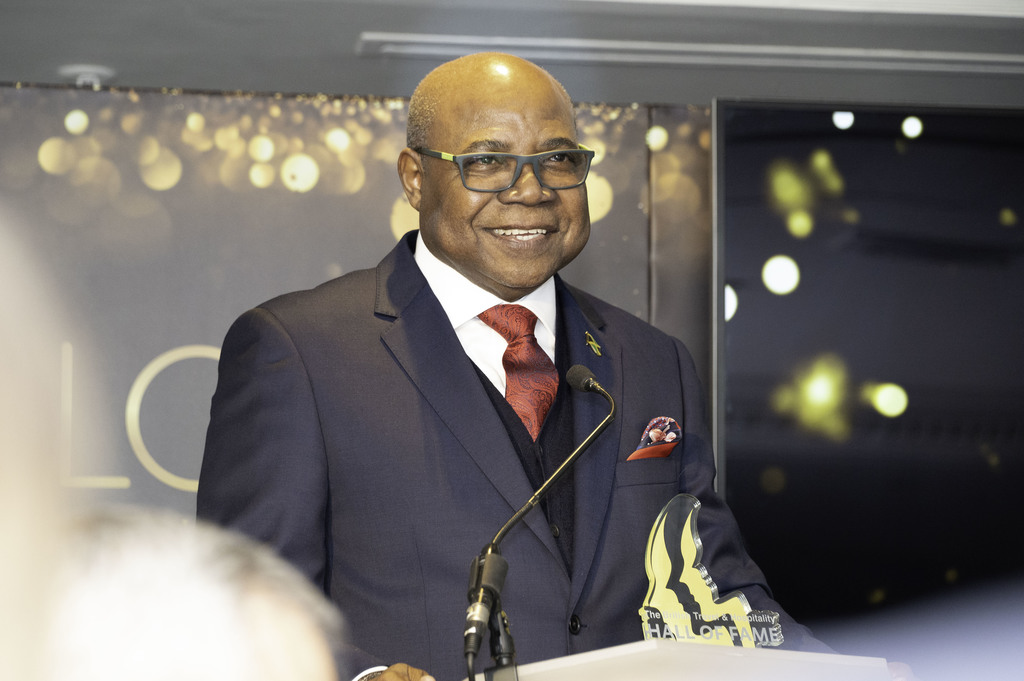 The Global Travel Hall of Fame has welcomed Jamaica’s tourism minister Edmund Bartlett in a highly anticipated ceremony at the Chesterfield Hotel in London on April 28.

Jamaica’s tourism minister Edmund Bartlett was inducted into the Global Travel Hall of Fame – which “recognises the highest achievers in the travel, hospitality, tourism and leisure sectors” – last week. He was presented with the award by Brett Tollman, CEO of the Travel Corporation. The politician is the first Caribbean tourism leader to receive the honour which sees him join an esteemed group of high achievers in the international travel and hospitality industry.

It is presented to those who have achieved phenomenal business success while inspiring and shaping those around them.

“It is really a humbling experience to be recognised in this manner and to be included as a member of such a revered group,” Bartlett said. “More so because it recognises not just my own contribution to the sector but the fact that Jamaica stands out as a prime example of what can be achieved in tourism,” he added.

The politician also praised the team that he heads at the Ministry of Tourism along with its public bodies. He described members as “very dedicated and hardworking public sector workers who appreciate the significance of what they do to the success of tourism and its important contribution to the Jamaican economy.”

He further applauded tourism stakeholders as partners across the island for their support and contribution in developing the sector.

The minister was also recently named among 50 global icons of travel and tourism to have created and innovated new benchmarks in the travel, tourism, hospitality, aviation and allied sectors.

The tourism industry in Jamaica has bounced back from the challenges presented by the Covid-19 pandemic under his leadership. It is now returning towards pre-pandemic figures for earnings and arrivals.

During his career, Jamaica’s tourism minister has received several prestigious awards for his achievements. He was named the Caribbean’s leading personality for outstanding services to tourism at the World Travel Awards in 2016. The following year, he was named Caribbean tourism Minister of the Year at the Caribbean Travel Awards. In 2018, he was recognised by the Pacific Area Travel Writers’ Association as Minister of the Year for Sustainable Tourism and in 2019, he was presented with the TRAVVY Awards inaugural Chairman’s Award for Global Tourism Innovation. This was in relation to the development of the Global Tourism Resilience and Crisis Management Centre which he established in 2018 and which aims to safeguard and protect the tourism product globally. Furthermore, he was presented with the Gusi Peace Prize from the Gusi Foundation in 2020.

Bartlett has been conducting a global marketing tour, promoting Jamaica in New York, New Jersey, Connecticut and Boston before continuing onto the Middle East, in a bid to increase visitor numbers to the country.

Commenting on the Middle Eastern leg of the tour, he said: “We’re meeting with all the major airlines, including Emirates, Etihad, Qatar, SAL, and we’re going over to Riyadh as well to meet with King Khalid, their big aviation company, which wants to open 225 new gateways and we want Jamaica to be in that.”