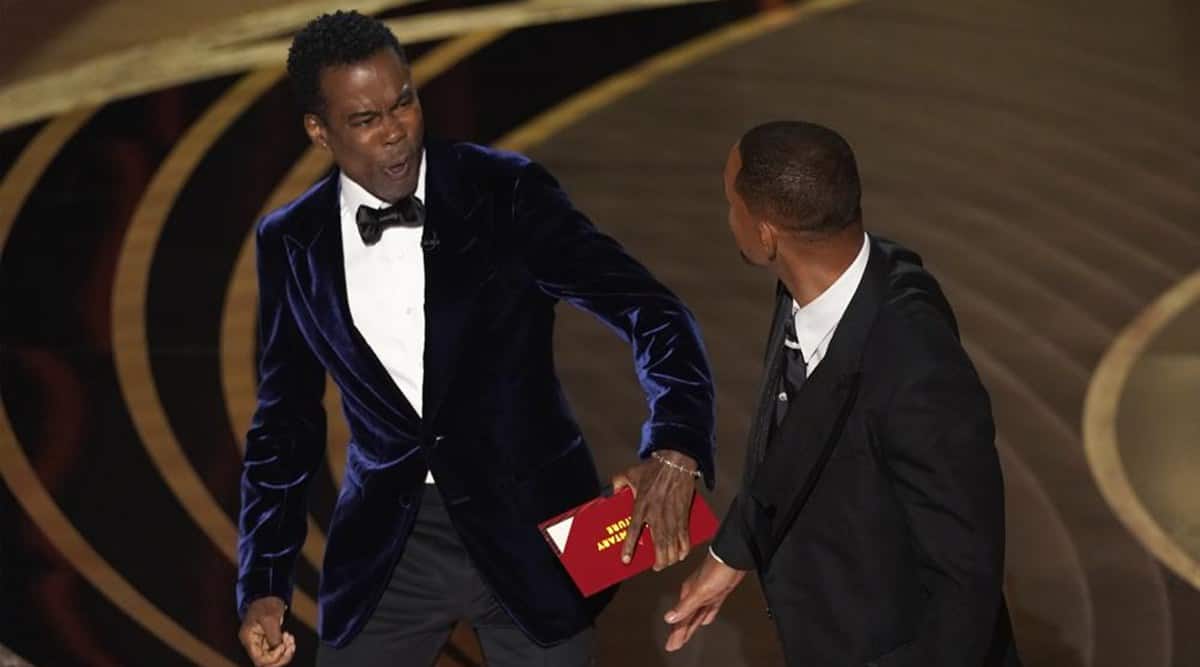 Hollywood star Will Smith stormed the stage at the 94th Academy Awards and struck comedian Chris Rock across the face for making a tasteless joke about his wife, actor Jada Pinkett Smith. Rock, who was presenting the best documentary prize, had cracked a joke comparing Jada Pinkett Smith’s cropped hair to Demi Moore’s appearance in the film “G.I. Jane” and suggesting she appear in a sequel. Jada suffers from an auto-immune disorder, alopecia, which causes hair loss and bald patches. After awkward silence and confusion in the Dolby Theatre, Will Smith marched up to Rock and slapped him, before returning to his seat alongside Jada and cursed him.

“Keep my wife’s name out of your f*****g mouth,” yelled Smith, forcing the producers to censor several seconds of audio from the televised broadcast in the United States.

While son Jaden Smith cheered his father on in a tweet and wrote, “That’s how we do it,” many other filmmakers and writers were not of the same opinion.

And That’s How We Do It

Filmmaker Andy Ostroy tweeted, “I am so fucking sick of this violent toxic-masculinity bullshit. A ‘real man’ doesn’t do what #WillSmith did… #Oscar #ChrisRock.” In another tweet he wrote, “Repeat after me: it doesn’t matter how tasteless or offensive #ChrisRock’s joke was. No one has the right to assault anyone else. Ever. EVER. #WillSmith #Oscar.”

Television host Conan O’Brien wrote, “Just saw the Will Smith slap. Anyone have a late night show I can borrow just for tomorrow?”

The Academy also tweeted saying that they do not condone violence.

The Academy does not condone violence of any form.

Tonight we are delighted to celebrate our 94th Academy Awards winners, who deserve this moment of recognition from their peers and movie lovers around the world.

Meanwhile, Bollywood actor Sophie Choudry expressed her disdain and wrote, “Violence is never the way but cracking jokes about someone’s medical condition should not be acceptable either. This was supposed to be a career high for one of my favourite artists for a superb performance. Instead he’ll be remembered for this crazy incident.”

Violence is never the way but cracking jokes about someone’s medical condition should not be acceptable either. This was supposed to be a career high for one of my favourite artists for a superb performance. Instead he’ll be remembered for this crazy incident? #willsmith #Oscars pic.twitter.com/EBuEOiKNwu

Actor and wrestler Mick Foley wrote, “If it was  @TheRock instead of @chrisrock making the same #GIJane reference, there’s no slap. The vessel of a love is a bully.” He added in another tweet, “Maybe being a vessel of love should have included apologizing to the guy he slapped the sh%t out of on live TV.”