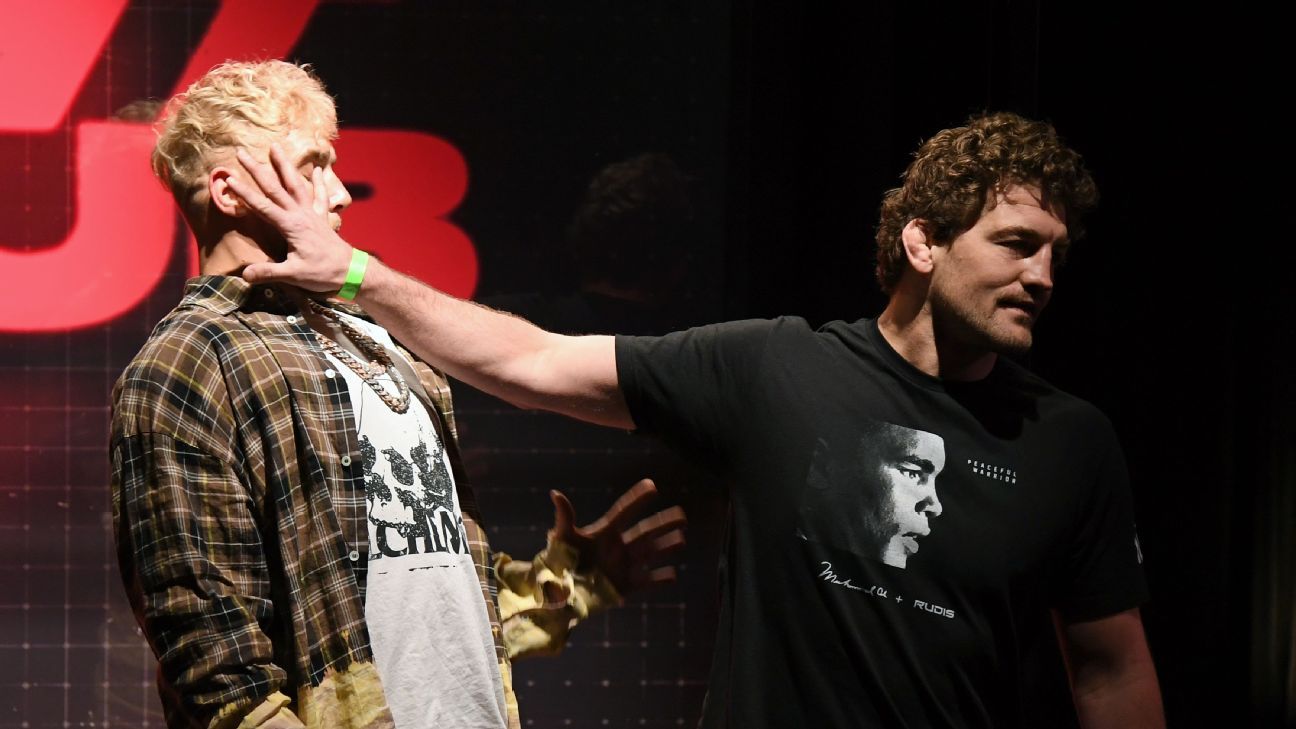 While the world waits for Anthony Joshua-Tyson Fury, Jose Ramirez-Josh Taylor and Teofimo Lopez-George Kambosos, the boxing spotlight will be placed on the sideshows as celebrities and former champions are making their way into the squared circle. There is little doubt that boxing purists hate what’s on tap this weekend, but the reality is that Jake Paul vs. Ben Askren will indeed capture the attention of the sports and celebrity world. Will Triller find gold with yet another music and boxing showcase?

This week may also serve as the definitive time for the Joshua-Fury finalization. Will boxing finally get the crowning of its first four-title champion this July?

And this past weekend, we watched as Joe Smith finally earned a title win and Jaron “Boots” Ennis proved that he’s ready for much tougher competition. Will either of them add more gold to their waists in 2020? Similarly, will Demetrius Andrade defeat Liam Williams this weekend and finally get an opponent that will make the world take notice?

Real or Not: Jake Paul-Ben Askren will be a very successful boxing PPV

Wolfe: Real, even if half the viewers are only hate-buying the PPV to see one of them get knocked out in dramatic fashion. This new wave of influencers, legends and/or MMA fighters getting in the boxing ring together seems to always draw eyeballs. I wouldn’t be surprised if Paul-Askren outsells every other boxing PPV in 2021 outside out Tyson Fury-Anthony Joshua and Mike Tyson exhibitions (Canelo Alvarez will be fighting on subscription-based on DAZN). Yes, that’s an indictment on the current state of boxing, but it’s also a clear challenge to make the fights that people want to see.

Paul and Askren have strong social media followings and their beef leading up to the fight is the internet promotion that will drive people to hand over their dollars. Paul is riding a boxing high after his viral knockout of Nate Robinson in November and people seeking Saturday night entertainment will pay to see if he can make an actual professional combat fighter in Askren his next victim.

Real or Not: Tyson Fury and Anthony Joshua will meet in July as planned

Parkinson: Real… probably. Matchroom promoter Eddie Hearn, who works with Joshua, has remained positive about making the fight throughout the negotiating process this year. Hearn said over the weekend, “We are in a great place with several offers on the table. I’m quietly confident.”

But that does not stop the nagging suspicion for some that the offers on the table will not meet the financial expectations of one or both of the fighters due to restrictions on revenue caused by the coronavirus pandemic.

However, delaying the fight until later this year, with both taking interim fights, has its problems and this may lead to a positive outcome this week. A fight in July would see all four major world heavyweight titles on the line for the first time: an enticing chance to make history for one of the English boxers.

Delay the fight, and possible mandatory defense obligations — especially on Joshua’s side with the WBO title in a dangerous fight against Oleksandr Usyk — come into play. And if they both take interim fights, there’s the real danger one of them will lose or suffer injury, causing further delay. Remember, Fury suffered a gruesome cut against Otto Wallin in Sept. 2019 that needed 47 stitches. The cut was so bad there was a real chance the fight would get stopped, and ruin the plan for Fury to fight Deontay Wilder in a rematch.

Considering the pluses and minuses of fighting in July, both fighters are likely to sign on the dotted line for a clash in Saudi Arabia on July 24. The Allegiant Stadium in Las Vegas is another option to host the megafight, but it would be a surprise to see it take place at Wembley Stadium in London in the fighters’ native England due to doubts over whether a crowd of 100,000 can be permitted in July because of coronavirus restrictions.

Real or Not: Joe Smith Jr. can beat Artur Beterbiev in unification match

Baby: Not real. Let me start this by saying Joe Smith Jr. deserves a ton of credit. At one point against Maxim Vlasov, Smith looked like he had nothing left in the tank and he was going to let another title shot slip out of his grasp. Instead, Smith rallied in the championship rounds, landed some big power shots and did just enough to squeak out the victory.

All of that being said, however, I still don’t think he’s good enough to beat Beterbiev. Just look at Beterbiev’s resume. It’s filled with knockouts and a bunch of lackluster names. What does that tell you? Nobody is signing up to fight this guy because they know what it entails.

Do you think Canelo Alvarez wanted a piece of Beterbiev at 175 pounds? Alvarez is staying at 168 pounds, in case anyone needs the answer to that question after beating Sergey Kovalev to win a light heavyweight belt.

Beterbiev is a pure menace in the ring. He is technically sound, has good footwork and carries swift, judicious power — all things that will be problems for Smith in a potential fight down the line. And that’s not taking anything away from Smith.

Smith earned a world championship. But Beterbiev, even at 36, seems to be a completely different type of fighter.

Real or Not: Demetrius Andrade should fight Gennadiy Golovkin next

Baby: Real. On paper, this fight makes too much sense for it not to happen. Each man fights on DAZN, so the typical boxing politics shouldn’t be an issue. Andrade is the WBO middleweight champion, while Golovkin holds the IBF belt in the 160-pound division. The winner of this matchup will be the only unified middleweight champion.

But more importantly, this is a good fight for both at each point in their respective careers. Golovkin could use a win over a young fighter to show he’s still a force in the middleweight division. Meanwhile, most of the conversation around Andrade has been about who he hasn’t faced. While the reasons for Andrade’s thin resume are debatable, it’s clear he needs to boost his profile to gain some bargaining power for some of the bigger fights around those weight classes — most notably against WBC champion Jermell Charlo.

Because Golovkin can’t get a third fight against Alvarez and Andrade might be the lowest-profile champion in a glamour division, middleweight doesn’t have nearly as much buzz as the other divisions. A Golovkin-Andrade matchup could change that and immediately give the winner a much-needed boost.

Real or Not: Jaron Ennis deserves a title fight at welterweight

Rothstein: Yes, Ennis deserves a shot at this point, but not against either Terrence Crawford or Errol Spence. Ennis’ shot should come against WBA title holder Yordenis Ugas (or, I guess, Jamal James depending how you view the different world titles within the WBA — but that’s another conversation for another day).

Ennis (27-0, 25 KO) has consistently knocked out his opponents whenever he steps into the ring, including a sixth-round knockout of Sergey Lipinets on Saturday night. He hasn’t reached a decision since 2017 (a unanimous decision against James Winchester) and only has gone the distance in two of his 28 fights. The only reason he doesn’t have a massive knockout streak going is because his Dec. 19, 2020 fight against Chris van Heerden ended in a no-decision after an accidental head butt.

But no matter, it’s time for Ennis to get his chance to fight for a championship. Ugas makes the most sense for Ennis — he’s probably the most vulnerable of the three current title holders — and the winner should set up well to take on either Spence or Crawford in a unification big-time fight either at the end of 2021 or early in 2022.

Of course, boxing is fickle and promoting and lining up the fights that should happen doesn’t always happen, but Ennis has done his part to give himself a chance to win a belt. Along with Vergil Ortiz Jr., they have a chance to become the next stars of their division since they are both only 23 years old.