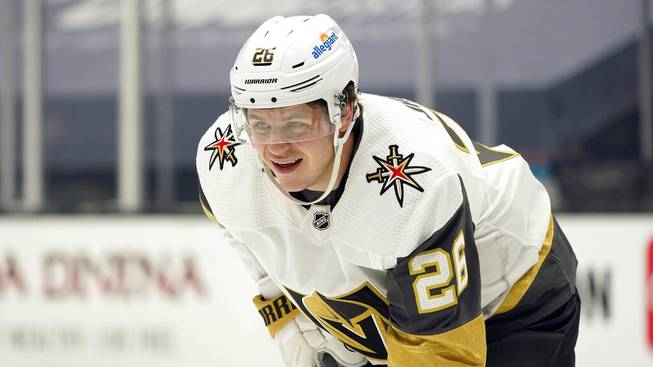 Mattias Janmark said after the season that he had a pretty clear picture of the Golden Knights’ salary cap situation. There likely wasn’t space to bring back the multifaceted forward, and his stint in Vegas was likely to be short-lived.

Fast-forward to free agency, and the Golden Knights announced a one-year, $2 million contract with Janmark, taking a few by surprise.

“There were a lot of moving parts, and I knew that they were trying to do a lot of things and needed certain things to happen for me to be able to come back,” Janmark said. “I’m glad it worked out and I’m excited for next year.”

Janmark came to Vegas at the trade deadline and played a bit of everywhere in the top nine. He started on the wing, played some center and even spent some time on the top line. Multiple times general manager Kelly McCrimmon has called him a Swiss Army knife, a role he’ll be expected to play again in his first full season with the Golden Knights.

He’ll likely start on the third line’s left wing. Alex Tuch’s offseason shoulder surgery is expected to keep him out until the second half of the season, allowing new arrival Evgenii Dadonov to play his usual role on the right wing. A training camp battle between Peyton Krebs, Nolan Patrick and others figures to decide the center position.

Right now, a line of Janmark, Dadonov and whoever plays center looks like a strong third line behind the usual top-six of Max Pacioretty, Chandler Stephenson and Mark Stone, and Jonathan Marchessault, William Karlsson and Reilly Smith. But things change, and if one of those players gets hurt, Janmark could fill in for any of them. He did just that at the end of the regular season, taking Pacioretty’s spot on the top line’s left wing.

“He was able to contribute in a number of different ways,” McCrimmon said. “A real solid, respected, two-way NHL forward. So that was a bonus for us as the day went on.”

Janmark also rediscovered his game in Vegas after slumping at the end of his time in Chicago. He came to the Golden Knights in a 10-game slide with no goals and one assist after a strong start where he had five goals in the first month of the year.

He was also underwater in advanced stats, including a minus-0.5 Goals Above Replacement number from Evolving Hockey, a catch-all statistic that tries to quantify how valuable a player is in relation to a generic “replacement”-level player. That was in 41 games, and in 15 with Vegas, he was worth 3.2 GAR, a number that over the full season would have made him one of the Golden Knights’ best forwards.

He managed five points in 15 regular season games with Vegas — a 27-point pace over an 82-game season — but had eight points in 16 playoff games, including the Game 7 hat trick against Minnesota. Coupled with strong defense and penalty-killing, he fit in well with the Golden Knights.

And all that was in just 31 games between the regular season and playoffs. He’s stated his personal goal of making Team Sweden’s Olympic team this winter, so he’ll be motivated for many reasons to have a strong season.

The Golden Knights are counting on it. It’s why they brought him back for another season and will be counting on him to do a little bit of everything.

“I think I can play wherever, up and down the lineup, and that’s what you need on a good team from me,” Janmark said. “But I also know it’s up to me how well I perform for what chance I’m going to get.”