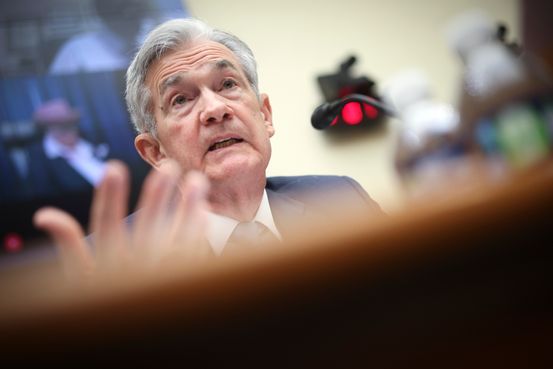 over how the central bank would manage trade-offs it could confront if its interest rate increases slow the economy sharply but don’t reduce inflation quickly.

Mr. Powell on Thursday said that in such a scenario, the central bank would be reluctant to shift from raising rates to cutting them until it saw clear evidence that inflation was coming down in a convincing fashion.

“We can’t fail on this. We really have to get inflation down,” Mr. Powell said during the second of two days of testimony. “We’re going to want to see evidence that it really is coming down before we declare ‘mission accomplished,’ ” he told the House Financial Services Committee.

Rep. Trey Hollingsworth (R., Ind.) told Mr. Powell he worried the Fed’s policy choices were about to become far more challenging, and he asked how its rate policies would shift if economic growth stalled and joblessness rose.

“In that hypothetical situation, that would be a setting in which inflation could be expected to come down,” Mr. Powell said, which could meet a test the Fed has established to slow or stop rate rises. But he added, “I think we’d be reluctant to cut.”

The exchanges highlighted an important dilemma that could confront the central bank. In the mid-1970s, for example, the Fed raised rates aggressively but, in hindsight, backed off too soon and failed to break the back of high inflation, forcing stiffer action later.

Rising fuel costs and supply-chain disruptions from Russia’s war against Ukraine have sent prices up in recent months. Those pressures have added to already-high inflation as demand surged last year from the reopening of the economy and aggressive government stimulus.

Since March, the Fed has raised its benchmark federal-funds rate three times from near zero to a range between 1.5% and 1.75%, including a 0.75-percentage-point rate rise last week, the largest in 28 years. Mr. Powell and several colleagues have signaled that another increase of that magnitude could be likely at the Fed’s next meeting, July 26-27.

Republicans and Democrats raised concerns that the Fed’s plans to slow the economy to bring down inflation would push the economy into a recession, but they differed over who should take the blame.

Republicans largely faulted the Biden administration for putting the central bank in a position to raise borrowing costs aggressively and said the Fed might not have to take such measures if the White House was doing more to boost the supply of domestic energy, including by easing regulatory burdens.

(R., Minn.) said the U.S. would be better off by cutting spending to relieve high inflation and expressed concern that the Fed would raise rates to “a catastrophic level.” Describing the central bank’s rate increases, he said, “This is not a dog chasing its tail. This is a dog starting to devour its tail and its back end.”

Democrats, meanwhile, warned the Fed’s rate increases would do little to relieve rising energy or food prices, and could exacerbate supply shortages by slowing investment. For example, some warned of how rate rises could chill new housing construction.

“While it is important for the Fed to fight inflation, I would caution against any approach that ignores the Fed’s maximum employment mandate and results in a recession with millions of people losing their homes and jobs,” said House Financial Services Committee Chairman

(D., N.Y.) pressed Mr. Powell to endorse other methods to bring down inflation, such as stiffer antitrust regulation or price controls.

Mr. Powell demurred. “There’s been a long history of price controls” when inflation is high, he said, “and it has not been a successful one.”

Mr. Powell tried to avoid getting pinned down in a partisan fight, but at one point, he allowed that an increase in energy production could bring down gas prices. “Obviously, the more supply there is, the more the price can go down,” he said.

What actions should the Federal Reserve take on interest rates? Join the conversation below.

Earlier, the Fed leader pushed back against the idea that corporate greed was a primary driver of high inflation. “It is not at all clear that there is a connection between a more concentrated economy and, for example, inflation,” Mr. Powell said.

Over two days of hearings, Republicans also tried to use Mr. Powell as a foil to dispute Mr. Biden’s efforts to blame higher prices this year on Russian President

“Given how inflation has escalated over the past 18 months, would you say that the war in Ukraine is the primary driver of inflation in America?” asked Sen. Bill Hagerty (R., Tenn.) on Wednesday.

“No,” Mr. Powell responded. “Inflation was high before—certainly before the war in Ukraine broke out.”

Last week’s 0.75-percentage-point rate increase marked an abrupt change from unusually precise guidance delivered by many members of the rate-setting Federal Open Market Committee, who had indicated ahead of their meeting that they would raise rates by a smaller half percentage point, as they did in May.

Mr. Powell said the committee decided to approve the larger rate rise because of concerns over recent data on inflation and inflation expectations. Fed officials believe expectations of future inflation can be self-fulfilling. If those expectations are rising, the Fed could be required to lift rates to levels that push even harder on the monetary brakes.

Mr. Powell said Thursday there were some “small concerning signs” that longer-term inflation expectations might be rising.

“As a general matter, people do expect inflation to come back down to levels that are consistent with our price-stability mandate,” he said Thursday. “But we haven’t had a test like this. We haven’t had an extended period of high inflation for some time. So it’s not a comfortable place to be.”

Write to Nick Timiraos at nick.timiraos@wsj.com