Varun Dhawan, Kiara Advani, Anil Kapoor and Neetu Kapoor are leaving no stone unturned to promote their upcoming family entertainer, ‘Jug Jugg Jeeyo‘. The audience has been eagerly waiting to watch the film on the big screen. The trailer has left everyone quite excited. Amid the promotions, Neetu shared a hilarious video of Johnny Depp and Amber Heard from their defamation trial case on her Instagram story.

An Instagram user has taken Depp and Heard’s video from the court and used Kiara and Varun’s ‘divorce’ dialogue from the trailer. Neetu shared the video on her story and put a laughing emoji. Have a look: 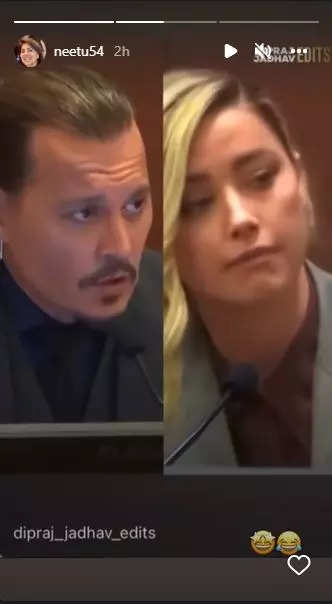 Meanwhile, Neetu penned an emotional note while sharing the trailer of ‘Jug Jugg Jeeyo’. It is her first film after her husband Rishi Kapoor’s demise. She wrote, “Sharing a big chunk of my heart with you today! The #JJJTrailer is out now and ready for you to experience the ultimate family reunion of the year. You’ll feel love, laughter, magic and tears like never before with this one 💕.”

The film is directed by Raj Mehta and is slated to release on June 24.

On the work front, Neetu is currently busy judging a dance reality show with Nora Fatehi and Marzi Pestonji.