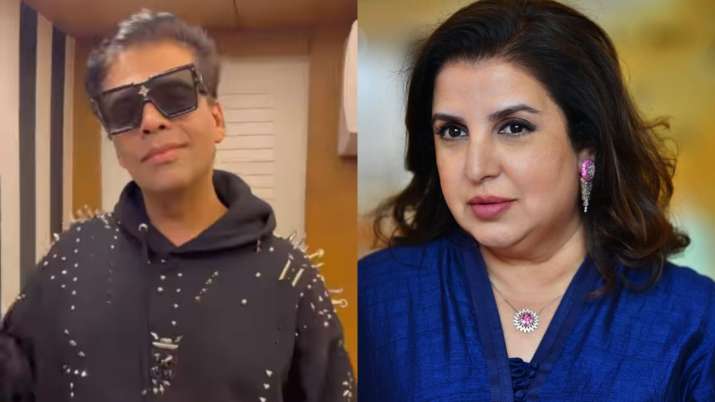 Bollywood filmmakers Karan Johar and Farah Khan are best of friends who are every now and then seen sharing hilarious videos on their respective social media handles. Yet again, they did the same when they treated everyone with another funny video in which Karan can be seen sporting his perkily accessorised hoodie having metal embellishments on it. Not only this but the Hunarbaaz judge was also seen wearing studded sunglasses that caught the attention of Kundra who left no chance and mocked Karan for his ‘Shahenshah’ avatar. The clip was shared by Farah with a caption reading, “This deserved a reel! @karanjohar in a shahenshah hoodie.. #bestfriends #karah.”

It begins with Farah getting surprised after looking at Karan’s sunglasses as she says, “Oh my God, is that a diamond. Oh my God, this Shehenshah look.” Karan backs off and says, “Listen, these are studs, something that you’re not used to.” Farah moves closer to Karan and while showing everyone the full attire says, “I was once used to. But listen, what are these pokey things? Oh, this is the only poke you will give me.”

Farah’s statements leave Karan offended as he says, “Oh my God, that’s an insult. I’m humiliated. I can’t take this anymore.” He opens the door to get out get mocked by Farah once again who pokes fun at him and says, “Finished, going back into your closet?”

Well, this isn’t the first time that the two have shared their hilarious banter over social media. See some more of them here:

Karan is these days seen judging ‘Hunarbaaz’ along with Parineeti Chopra while for Farah Khan, she was seen in ‘Comedy Show’.