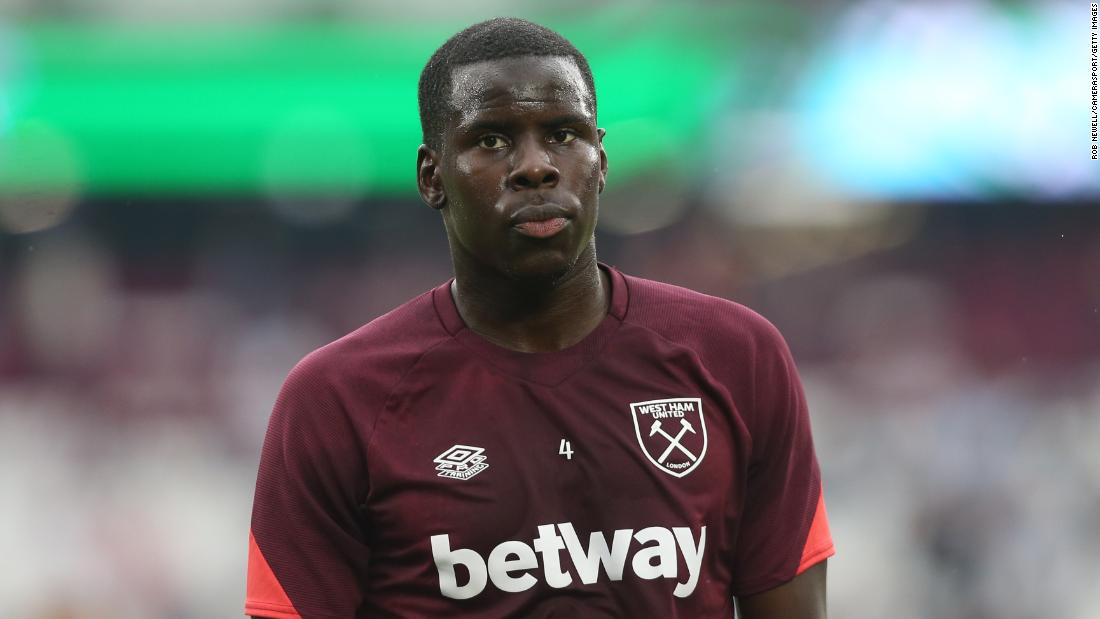 On Wednesday, West Ham released a statement on its website, saying Zouma and the club are “co-operating fully” with an investigation by the Royal Society for the Prevention of Cruelty to Animals (RSPCA) — the UK’s leading animal welfare charity.

The statement added “the player has willingly complied with the steps taken in the initial stage of the process, including delivering his family’s two cats to the RSPCA for assessment.”

The fine and RSPCA investigation comes after Zouma was filmed seemingly hurling shoes at his pet cat, slapping it across the face, chasing it around the room and kicking it across the floor in what looks to be a private residence.

The video was first published by the Sun newspaper on Monday. Laughter could be heard in the background of the footage. CNN has not independently verified the video.

West Ham added that the French defender is “extremely remorseful and, like everyone at the club, fully understands the depth of feeling surrounding the incident and the need for action to be taken.”

The club also said Zouma had been fined for the actions: “Separate to the RSPCA’s investigation and pending further sanction once the outcome of that process is determined, West Ham United can confirm that Kurt Zouma has been fined the maximum amount possible following his actions in the video that circulated.

“The player has immediately accepted the fine and has requested that it is donated to animal welfare charities.”

West Ham said it wanted to “reiterate our condemnation of Kurt’s actions and make it clear that the matter continues to be handled with the utmost seriousness.”

The club said it believes “it is now important to allow the RSPCA to conduct their investigation in a fair and thorough manner” and that it will be “making no further comment at this stage.”

In a statement issued to CNN on Wednesday, an RSPCA spokesperson said: “The two cats are now in RSPCA care. Our priority is and has always been the wellbeing of these cats.

“They’ve been taken for a check-up at a vets and then will remain in our care while the investigation continues.

“We’re grateful to everyone who expressed their concern for these cats. We were dealing with this issue before the video went viral online and are leading the investigation.”

In the wake of the incident, Adidas told CNN Wednesday that it was dropping its sponsorship of the player.

“We have concluded our investigation and can confirm Kurt Zouma is no longer an adidas contracted athlete,” an Adidas spokesperson told CNN on Wednesday.

Meanwhile, West Ham has seen one of its sponsors — Vitality, a health and life insurance company based in the UK — suspend its relationship with the club.

In a statement posted to Twitter on Wednesday, the company said it was “very distressed by the video” of Zouma and that it condemned animal cruelty and violence of any kind.

Vitality said it was suspending its sponsorship of West Ham effective immediately and would be “engaging with the club to understand what actions they will be taking to address the situation.”

A petition on Change.org calling for Zouma to be prosecuted for animal cruelty has over 100,000 signatures.

In a statement to CNN on Tuesday, London’s Metropolitan Police force said: “We have received and are aware of such reports and have been in contact with the RSPCA who look into, and if necessary, investigate any complaints made about animal welfare.”

Zouma’s management team did not immediately respond to CNN’s request for comment.