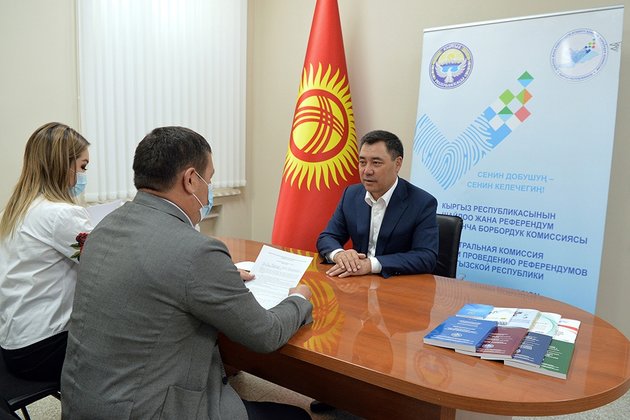 Presidential elections in Kyrgyzstan stand out in the region in part for the sheer number of people who want to take part.

As of the last count, more than 60 people have applied to be put on the ballot for the January 10 contest, although that number will be whittled down considerably by the time the vote comes around.

Sadyr Japarov, who last week resigned from his dual posts as acting president and prime minister, is the clear frontrunner. Stepping down as acting president was a requirement in order for him to run, so that job has been taken in the meantime by his close friend, the parliamentary speaker Talant Mamytov.

His most recognizable rival is the serial presidential election loser and former lawmaker Adakhan Madumarov, who has served previously as a deputy prime minister for about a year, after the 2005 revolution. He has made two runs for the highest office, in 2011 and 2017, respectively. Last time around, he garnered a meager 6.5 percent of the vote.

Japarov and Madumarov alike are positioning themselves in a distinctly populist mode.

Before quitting his two jobs, Japarov went on a blitz tour of the regions, during which he made all manner of promises to the public.

On November 9, while visiting the Naryn region, he promised local residents that he would at some point lift current restrictions on electricity consumption. At the moment, people living in the highland city are subject to a two-tiered tariff whereby the first 1,000 kilowatt hours are heavily subsidized, but additional use is charged at 2.6 som ($0.03) per kWh. Naryn residents have said they want to see that threshold doubled.

“I will say right away that the decision will not be made now, not this winter. There are proposals to lift the threshold next spring. Of course, we could do it now. But people are people. It is said that if this is done, the people will immediately switch to using electricity for heating instead of coal. And this will lead to failures at transformer substations and power lines,” he said.

Madumarov also claims support from a wide swathe of the populace.

“I am a self-nominated candidate. The president of Kyrgyzstan must represent the interests of the entire people, all political strata, all social strata, and not just particular groups,” he said at an October 30 press conference.

Other well-known faces in the running include Klara Sooronkulova, whose political activity has of late been focused on leading the Reforma party. The former Constitutional Chamber judge achieved prominence last year for her role in anti-corruption rallies. Although those demonstrations captured the imagination of many progressive, urban types, the crowdfunded Reforma party has had little traction. Although the now-annulled October 4 parliamentary election has been discredited as an exercise in democracy, the 1.7 percent vote tally for Reforma likely reflected the party’s real electoral pull.

The firebrand activist Toktayim Umetalieva is another familiar election contestant, having taken part in the 2005, 2009 and 2017 votes. She has never made any serious impact though.

Going down the list of names yields many light-relief, would-be candidates as well.

Easily the most famous is the crackpot businessman Arstan “Alai” Abdyldayev, who ran for president in 2011 and 2017. Abdyldayev is best known for a series of bizarre public pronouncements, like the one that made him an internet sensation in 2011, when he predicted confidently, on the basis of cosmic revelations, that there would be no winter that year. He followed that up the next year with the claim that Russian President Vladimir Putin was a “complex biorobot” who would save the world.

Not all his forecasts have been off the mark though. In mid-October 2019, Abdyldayev earned some unwanted attention from the authorities after one of his supporters held up a sign outside a government building announcing that “the season of [President Sooronbai] Jeenbekov has finished.” Almost exactly one year later to the day, Jeenbekov was forced to resign under pressure from Japarov supporters.

At that time, the way prosecutors intended to silence Abdyldayev – a peculiar desire given that the businessman is at most an oddball exhibitionist – was to possibly charge him with inciting religious hatred for claiming at one stage that he was a god.

Undeterred, he made that assertion again this week.

“I have become the new God. I rule the universe, nature and humanity,” he was quoted as saying. “In 2020, the time of Jeenbekov ended. Now I shall be president.”

One more character running for office is Nurlan Motuyev, still known as the “Coal King” for his antics in the wake of the 2005 revolution, when he seized an important coal deposit, expelling the companies working there. That earned him criminal charges, but it didn’t dampen his ambitions. In 2009, he ran in the presidential election and won less than 1 percent of the vote.

He is now probably best-known to younger Kyrgyz people for uploading footage of himself to the internet in which he performs karaoke, very badly, at home.

Babur Tolbayev is one more gift to the meme-makers aspiring to become president. The businessman, philanthropist and director of microcredit company Mol Bulak, has gained celebrity status with a faintly deranged straight-to-came video appeal during the first COVID-19 wave in which he furiously “ordered people to live.” The video became a viral hit and was even adapted into songs by local artists.

There are somewhat more serious, if wholly unrealistic, candidates too. They include Eldar Abakirov, deputy economy minister from 2016 to 2019, and Kuban Choroyev, an economist and the chairman of a foundation promoting the revival of nomadic culture.

Abdil Segizbayev, who ran the State Committee for National Security from 2015 to 2018, has thrown his hat into the ring, as has former deputy Interior Minister Kursan Asanov, who is currently facing his own complicated set of legal troubles.

The process of elimination runs along a few lines. First, there is the money to consider. Not many may be immediately able to raise the 1 million som ($11,800) deposit. Collecting 30,000 signatures is probably even more difficult. Anybody with dual citizenship will be excluded. Candidates must also pass a Kyrgyz language test and be aged between 35 and 70 years old.

By the time these and other factors are considered, the list will be far more manageable.