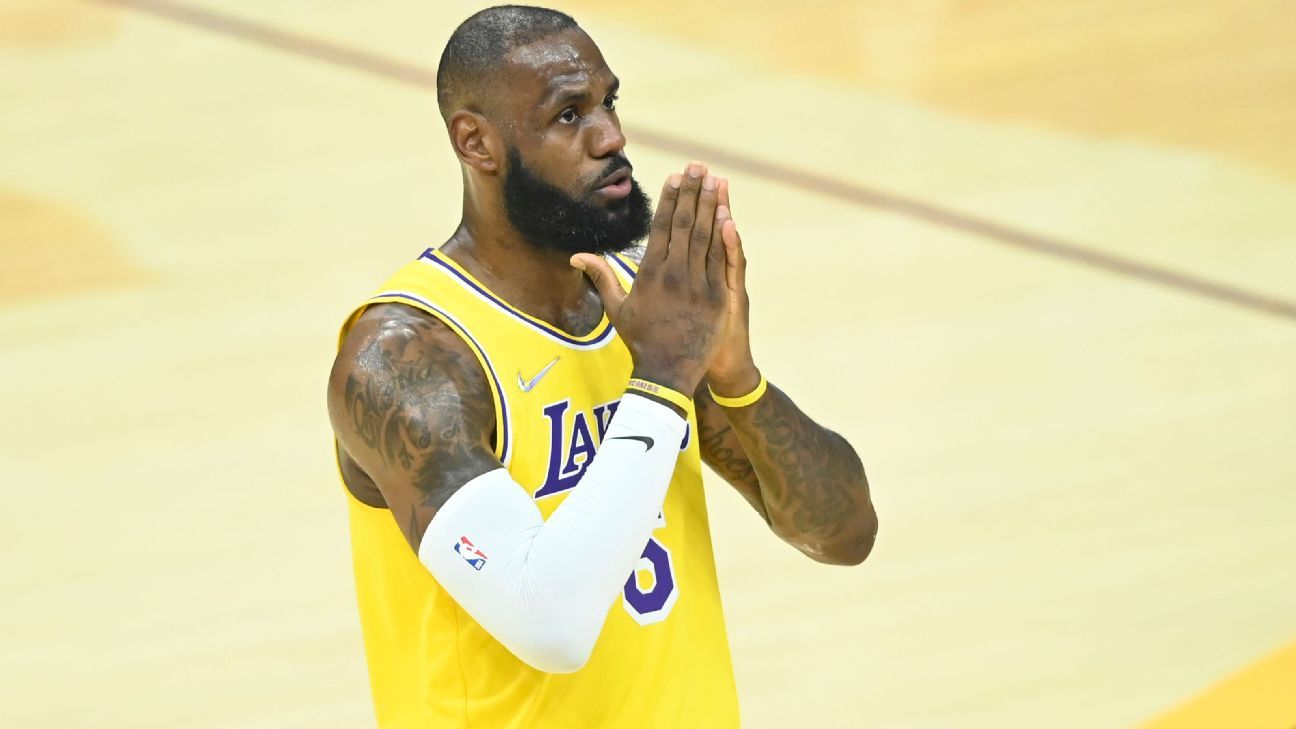 NEW ORLEANS — LeBron James said his left ankle felt “horrible” after turning it in the first half of the Los Angeles Lakers‘ 116-108 loss to the New Orleans Pelicans on Sunday, and his availability to play Tuesday in Dallas is in question as L.A. faces a crucial final stretch to try to lock in a spot in the play-in tournament.

“I mean, I have no idea how I finished the game, to be honest, after watching that replay,” James said after finishing with 39 points, nine rebounds and five assists in 42 minutes against New Orleans. “It’s pretty nasty.”

James’ ankle was wrapped after the game, and he was walking with a noticeable limp.

He was unsure whether it would cause him to miss any games.

He suffered the injury with 10:09 remaining in the second quarter with the Lakers up 36-29 when he stepped on Pelicans center Jaxson Hayes‘ sneaker and turned his ankle outward. He stayed on the floor for L.A.’s ensuing possession before the Lakers called timeout, and he ended up staying in the game after re-lacing his sneakers.

“I was going in for an offensive rebound and me and Jaxson basically stepped at the same time,” James said. “He got his foot on the ground before I could get my foot back on the hardwood. I stepped on his foot and rolled my ankle.”

Said Lakers coach Frank Vogel: “It’s tough. It’s just been that kind of season. He was just in an incredible groove right around then, and credit him for toughing it out. But you can see he was limited on it somewhat the rest of the way. But he battled through it.”

James said that if the game hadn’t meant so much to the Lakers’ playoff picture — L.A. fell from No. 9 to No. 10 in the Western Conference with the loss, now a half game behind the Pelicans and just a game up on the No. 11 San Antonio Spurs — he would have “probably not” finished the game.

“I mean, from the time I turned my ankle I felt a sharp pain run up my leg. It started getting hot. And I’ve been there before with ankle sprains before,” he said. “But I didn’t want to come out of the game because I understood [the importance]. I mean, I just wanted to win the game. I understood how big of a game it was for us.”

James said he had already started treatment on the ankle before leaving the arena and planned to continue it “around the clock” leading up to Tuesday’s game against the Dallas Mavericks.

The cabin pressure when L.A. flies from New Orleans to Dallas on Sunday night, however, won’t help the recovery.

“It’s horrible right now. And unfortunately, we’re about to hop on a flight, too,” James said. “See what happens day-to-day. But it’s pretty sore right now.”

James was still effective in the second quarter — going 5-for-6 from the field (4-for-5 from 3) for 14 points as L.A. pushed its lead to as many as 23 — but his play stagnated in the second half. He scored 14 points on 5-for-14 shooting after the break, and the Lakers were outscored by 24 points in the 21 minutes he was in the game.

“I just lost all explosiveness, obviously,” he said.

Lakers reserve Malik Monk said he still has belief, despite L.A.’s current predicament, in large part because of James’ presence.

“I’m never not confident in what we can do,” Monk said. “Especially when we got Bron on our team.”

Asked whether he can deliver on the confidence his teammates like Monk have in him, James said it will all depend on how well he can heal.

“Well, if I’m healthy, for sure. Obviously I’m pretty banged up with that ankle,” James said. “But I still feel like if I’m on the floor and I can make things happen then we still got a pretty good chance to make something out of this season.”