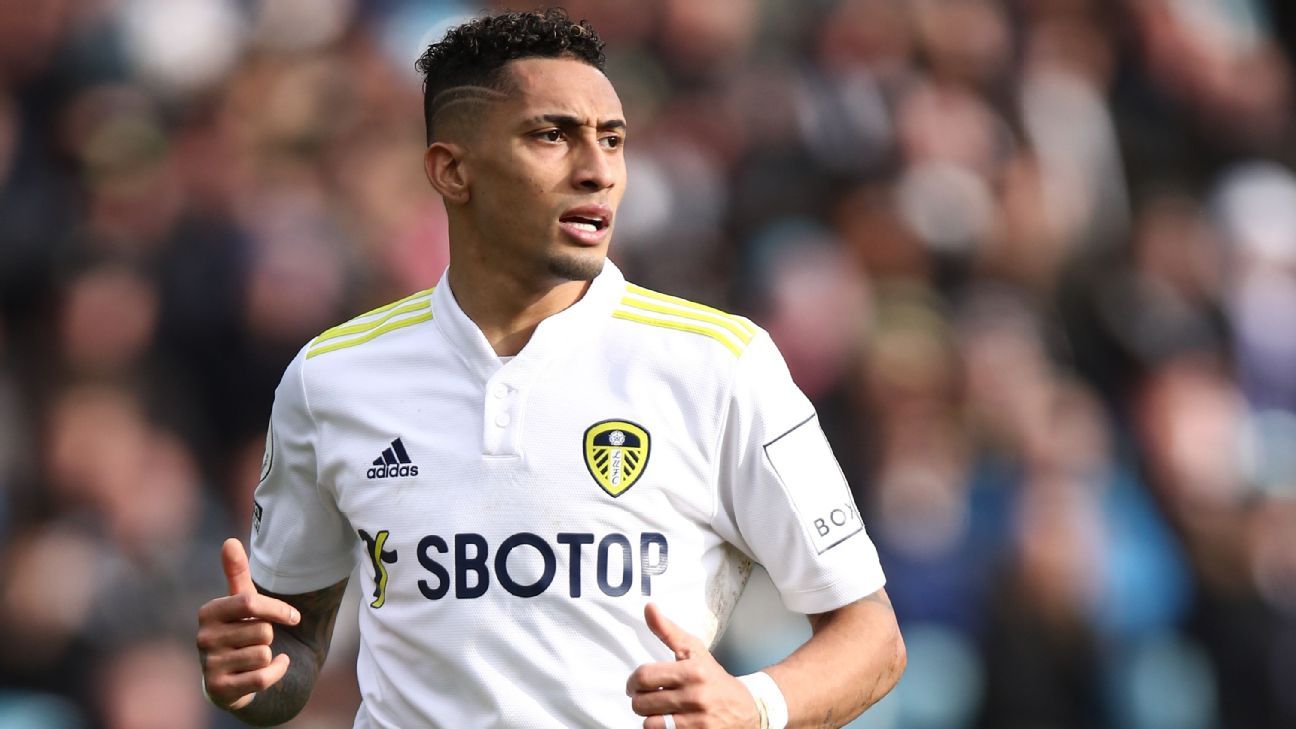 Leeds United winger Raphinha has agreed personal terms with Barcelona, according to Sport.

The 25-year-old will reportedly sign a five-year deal at Camp Nou, and the Spanish outlet has revealed that he has already given his word to the Blaugrana’s top executives ahead of a summer move.

Manager Xavi Hernandez has made Raphinha a priority signing to complete before the end of the season, with another offer being prepared by the LaLiga club that will be sent to Elland Road in the coming weeks.

While Leeds have previously rejected an offer of €35 million, Raphinha’s agent — former Barcelona star Deco — is trying to persuade the Premier League club to accept the offer, with the two sides also discussing the possibility of including defender Oscar Mingueza as part of the deal.

Raphinha has been a key part of Leeds’ relegation battle this season, contributing to 12 goals in 28 games for Jesse Marsch‘s side.

10.10 GMT: Barcelona president Joan Laporta has said no exceptions will be made with potential new signings regarding wages.

The Catalan club, who have a negative €144m spending limit according to LaLiga, continues to work on cutting down spending.

However, Laporta said Barca are still intending to make “four or five reinforcements” during the summer transfer window.

“We are working on the financial issue and obtaining more resources to have the salary margin we need,” Laporta told Mundo Deportivo. “And at the same time, we are working from the sporting management side to incorporate four or five reinforcements that we think the team needs to be increasingly competitive.”

Depay, who is Barca’s top scorer with 10 goals this season, is under contract at Camp Nou until June 2023. With Premier League clubs monitoring Depay, Barca have yet to make a decision over a new contract for the Netherlands international.

The former PSV Eindhoven, Manchester United and Lyon player is happy at Barca and would like to stay, but Barca would be open to a transfer for a fee in the region of €45m as they try to lower their wage bill and bring in new revenue in order to reinforce their squad this summer.

08.43 GMT: Real Madrid’s Luka Jovic is looking for a new club this summer in search of playing time, according to AS.

The Serbia forward, who is under contract with Madrid until June 2025, has played 17 games across all competitions for Madrid but only 473 minutes.

With Los Blancos expected to sign Paris Saint-Germain’s Kylian Mbappe as a free agent this summer and also in the race to land Borussia Dortmund’s Erling Haaland, Jovic knows his playing time will be even more limited next season if he decides to remain.

Madrid signed Jovic from Eintracht Frankfurt for €60m in the summer of 2019. The 24-year-old returned to Frankfurt in a six-month loan from Madrid in January 2021 but now the player is eager to leave Madrid on a permanent transfer.

08.00 GMT: Manchester United’s Paul Pogba said the lack of trophies at the club in the last few years has been upsetting and that he wants to “play for something” in the future.

The France international re-signed for United in 2016 and won two pieces of silverware with the side in that first season — the League Cup and Europa League — but since then, United have failed to win any trophies. Their trophy drought will extend to five years this season, their worst run in 40 years, after being knocked out of the FA Cup and the Champions League.

Pogba has failed to impress on a regular basis at Old Trafford, but now on international duty with France, he has said the lack of results has been difficult.

“The truth has to be said — there have been difficult times, especially when I was at Manchester,” Pogba told Telefoot. “When I haven’t played or when the results weren’t there, coming here [the French squad] gives me a boost.

“It’s difficult because a lot has happened, from the change in manager to my injury. We’re no longer fighting for a title, so it’s neutral.

“I want to win titles, I want to play for something. Whether it be this year or even the previous ones, we haven’t won anything. That’s what’s sad, in the end.”

When asked about his future, Pogba replied: “Nothing is decided on my future, nothing is done. I can decide tomorrow, just as I can decide during the transfer window. I want to bounce back and finish the season well.”

– Everton are considering moving Dele Alli on in the summer, according to the Mirror. The 25-year-old midfielder is yet to make a start for the Toffees this season, making six appearances from the bench for Frank Lampard’s side. After joining as recently as in January, it looks as though the club could have already lost patience with the former Tottenham Hotspur star.

– Dominic Calvert-Lewin could also move on from Everton this summer, with the club prepared to listen to offers for him, according to Ekrem Konur. After an impressive 2020-21 campaign, the 25-year-old striker has failed to repeat his form under Lampard, scoring just three Premier League goals in 10 appearances so far this season. He has previously been linked with Arsenal.

– Just the final details remain for Paris Saint-Germain to confirm for Marquinhos‘ new contract, reveals Fabrizio Romano. The 27-year-old centre-back is discussing a potential five-year deal that would see him remain at the Parc des Princes until 2027. The Brazil international first joined PSG in 2013 and has remained a key player in the starting XI this season, starring 32 times this season for Mauricio Pochettino’s side.

– Arsenal, Chelsea and Manchester United are monitoring Barcelona’s Ronald Araujo, reports the Express. The 23-year-old centre-back has been unable to agree to new terms at Camp Nou since the start of the year, and that has seen interest begin to circulate in Europe. Talks are set to take place next week with Barca to see whether he will remain at the club, and the three Premier League sides waiting patiently to make their move.

– Juventus are looking at three Italy internationals to add to their squad this summer, reveals Gazzetta dello Sport. The Bianconeri are looking to acquire AS Roma‘s Nicolo Zaniolo, 22, and Chelsea’s Jorginho, 30, as two midfield reinforcements, with hopes of also landing Sassuolo star Domenico Berardi. Massimiliano Allegri is looking to complete his rebuild with the trio of Italy stars as Juventus try to get back into the contention for the Serie A title, having found themselves seven points behind leaders AC Milan with eight games to go.