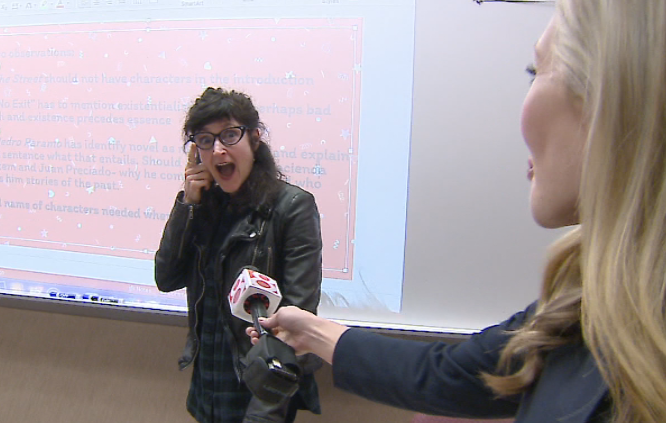 INDIANAPOLIS (WISH) — WISH-TV is proud to honor some of central Indiana’s most outstanding teachers with our Golden Apple Award.

The prize comes with a check for $500, a trophy and a big surprise. March’s winner is Jocelyn Sisson, an AP literature, language and composition teacher at North Central High School.

Sisson has spent decades helping students write their own stories. She demands kids be their best and is known for “yelping,” a term her students use to describe her yelling and helping method of teaching.

“She is small but mighty,” Andrew Hodson, the AP/ACP coordinator who also teaches anthropology and theory of knowledge, said. “She is just a ball of energy, passion, drive — has a great sense of humor.”

“She is electrifying in a classroom,” Greg Lineweaver, the chair of the English department, added.

“That warm demander that she is, brings out the best in our students,” Principal Evans Branigan III said.

Sisson’s spent more than 20 years of her 32-year teaching career at North Central. In that time, Sisson has built a reputation.

“She doesn’t suffer fools, you know?” Hodson said. “She calls balls and strikes like she sees them. She is always willing to put her wisdom and experience in the conversation.”

“She is whip-smart,” Lineweaver added. “That is something I find stimulating as a colleague and a professional.”

Sisson is a mom at home and the matriarch at the school.

As principal, Branigan says he has learned many lessons from Sisson over the years.

“She taught me a lesson as an associate principal, basically over compassion and showing empathy toward people,” Branigan said.

Sisson’s empathy shines through and shapes her students, such as senior Samuel Hammons.

He gave Sisson an award when the top 25 seniors at the school recognized their most influential educators.

“She is a very terse teacher. She is not going to be like, ‘Oh, good job but you need to fix it.’ She is going to tell you, ‘No, this is wrong. You need to change this,’ which really helps a lot. Even though it gives her sort of a reputation of being strict, it is really is what makes her teaching so powerful and so good because you know if you made a mistake, she will tell you how to fix it,” Hammons said.

Sisson is honest. Her stern and ever-educating approach is appreciated by students.

Junior Devon Kroupa-Haberski and many other students admit the “yelping” is unique, but works. They also adore Sisson’s personality.

“[Sisson] is very engaging,” Kroupa-Haberski said. “She is absolutely hilarious, but then she is also really good at making what her point is across.”

There is even a massive whiteboard grid chart in her classroom to keep the many meetings organized.

“Her door is always open and you can talk to her,” Kroupa-Haberski said. “And she is just really kind and caring. She really cares about her students.”

Sisson puts students in control of their education and  Kroupa-Haberski’s mom, Shenan Kroupa, has noticed.

“A teenage daughter wants to talk to her mother and it is often about either the fun things they are doing in the classroom or the really sort of difficult assignments she is having them work on. I am delighted when I get reports from my daughter about what is happening in the classroom … She is preparing them for college but also just to be thinkers in our community,” Kroupa said.

Kroupa was so impressed by Sisson that she wrote a letter to WISH-TV nominating Sisson for the Golden Apple Award. Sisson’s pupils and peers agree she is worthy.

“To see someone rewarded who works so hard, it is just great,” Hodson said. “A little justice in the universe.”

“It is refreshing to see that not only the students that work with her or her colleagues — but now Indianapolis and beyond — will see the good work [Sisson] does,” Branigan added.

That is why News 8’s Hanna Mordoh went to surprise her. Sisson screamed with joy and in shock when she saw students, staff and TV cameras during the surprise. Students cheered as Sisson received the trophy and a $500 check from the Golden Apple Award sponsor partner Bailey and Wood Mortgage Lender.

“I am overwhelmed,” Sisson said. “I mean, to hear people I respect say they respect me and have learned from me … You interviewed people that I hold near and dear to my heart as colleagues and as intellectual conversationalists and to hear that they respect me as much as I respect them, I mean, what greater reward is that?”

Through tears and happiness, Sisson expressed how teaching is not the “thankless” job many people describe.

“My students have taught me a lot about teaching, so I think I am fortunate to still be learning and working with people I respect. I really do love my students. I mean, you know people are like, really? And I do love my students. It is interesting to hear it described as a thankless task. I don’t think teaching is a thankless task. I think that the reward of teaching for me, 32 years later, is actually seeing the learning that has happened,” she said.

Sisson clearly makes it her mission to get students ready for college and is someone people she teaches really admire. She went to both Harvard University and Brown University. Her education is not something she boasts about. However, it is a fact her students are very proud of.

For Sisson, her proudest moment is seeing these young people become vibrant writers.

To watch other Golden Apple Award recipients, click this link.

To nominate a deserving teacher for next month’s Golden Apple Award, submit a detailed nomination here.