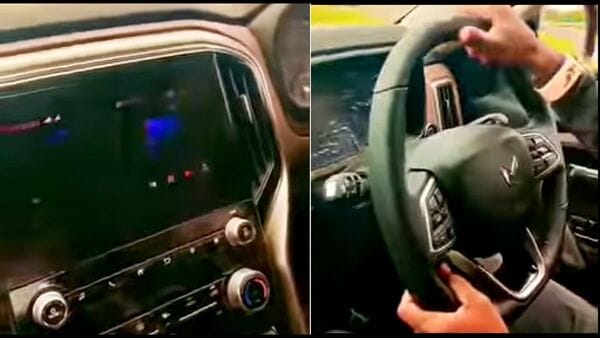 Mahindra and Mahindra will launch the facelift version of the Scorpio SUV, which has been rechristened as Scorpio-N, in the next few weeks.

2022 Mahindra Scorpio-N SUV interiors have been leaked ahead of its official debut in India. A video shared on social media platform gives a clear look at what to expect from the new Scorpio facelift, which will be sold as Scorpio-N in the market. The video shows a digital infotainment screen, a digital driver display among other key changes expected inside the new generation Scorpio. Mahindra will officially debut the 2022 Scorpio-N SUV in India on June 27.

The video shows a large infotainment screen on the dashboard of the Scorpio-N which is sourced from Sony. It is a new infotainment screen which has similarities with the system seen inside lower variants of the XUV700. Under the screen, the SUV will get physical buttons for volume, climate control and other functions.

The second image shows the driver display and the upgraded flat-bottom steering wheel laced with mounted controls like cruise control and other features. The instrument cluster appears to be analogue in nature.

The interior of the Scorpio-N SUV is likely to get more updates like new upholstery, dual-tone theme, 360-degree camera, dual-zone climate control and connected car technology among others.

The 2.0-litre turbocharged petrol engine, which is also being used in the flagship SUVs like XUV700 and Thar, is likely to generate 168 hp of power. This will be nearly 40 hp more than what the standard 2.2-litre diesel engine can generate. Even the 4X4 variant of the new Scorpio-N, which will come with the same diesel unit, is likely to be less powerful than the petrol engine on offer.

Both engines are expected to be offered with the choice of either a 6-speed manual or a 6-speed torque converter automatic transmission unit.