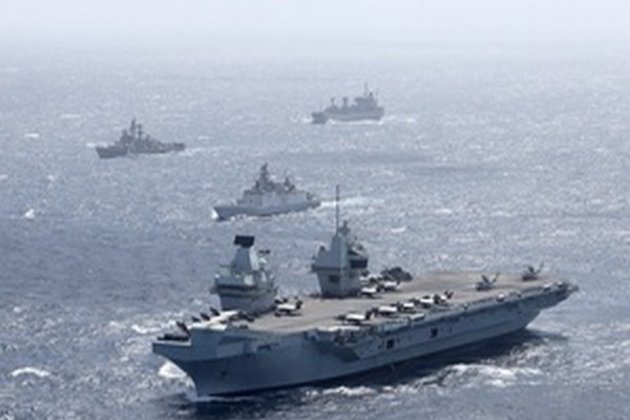 New Delhi [India], October 21 (ANI): The maiden India-UK Joint Tri-Service exercise Konkan Shakti is scheduled to be held between October 21 and 27 off the west coast of India and aims to derive “mutual benefits” from each other’s experiences.

According to a press release by the Indian Navy on Thursday, the exercise is scheduled to be held in two phases.

” The harbour phase is planned at Mumbai from October 21 to 23, while at sea, the exercises will be conducted from October 24 to 27,” said the release.

Highlighting the naval linkages between the two countries, the release said that it has grown in terms of interoperability and synergy.

“Over decades now, both navies have undertaken bilateral exercises, exchanges and enhanced their technical cooperation. Rightly so, this has formed the basis for the maiden tri-service bilateral exercise, Konkan Shakti -21,” said the release.

According to the release, Royal Navy (RN) will be represented by its aircraft carrier, HMS Queen Elizabeth, with her integral F35 fighter aircraft and helicopters, the Type 45 Daring Class air-defence destroyer HMS Defender, the Type 23 frigate HMS Richmond, a Royal Fleet Auxiliary (RFA) Fort Victoria, and a Royal Netherland Navy Frigate HNLMS Evertsen. Besides, the Indian Navy (IN) would be represented by three of its indigenously built stealth guided-missile destroyers INS Kolkata, INS Kochi and INS Chennai, two stealth frigates, INS Talwar and INS Teg, and the tanker INS Aditya. The IN will also be participating with integral Sea King 42B, Kamov-31 and Chetak helicopters, MIG 29K fighter aircraft, Dornier and P8i (maritime patrol aircraft) and a submarine. The exercise will also see participation by IAF aircraft that include Jaguars, SU-30 MKI fighters, AWACS, AEWC and Flight Refueling Aircraft.

Elaborating on the exercises at sea, the release informed, “The exercise at sea will feature advanced warfare tactics, Anti-Submarine Warfare exercises, over-the-horizon targeting drills, Air Defence Exercise, Cross Deck landings and other complex manoeuvres at sea.”Earlier, the Indian Air Force participated in an operational engagement with the UK Carrier Strike Group (CSG) on October 19 and 20. The exercise focused on multiple areas including enhancing aspects of interoperability and exchange of best practices, according to the press release.

“The Joint Company Level Exercise between the two nations is aimed at training troops in the conduct of Humanitarian Aid and Disaster Relief Operations by coalition forces in an opposed environment,” said the release. (ANI)