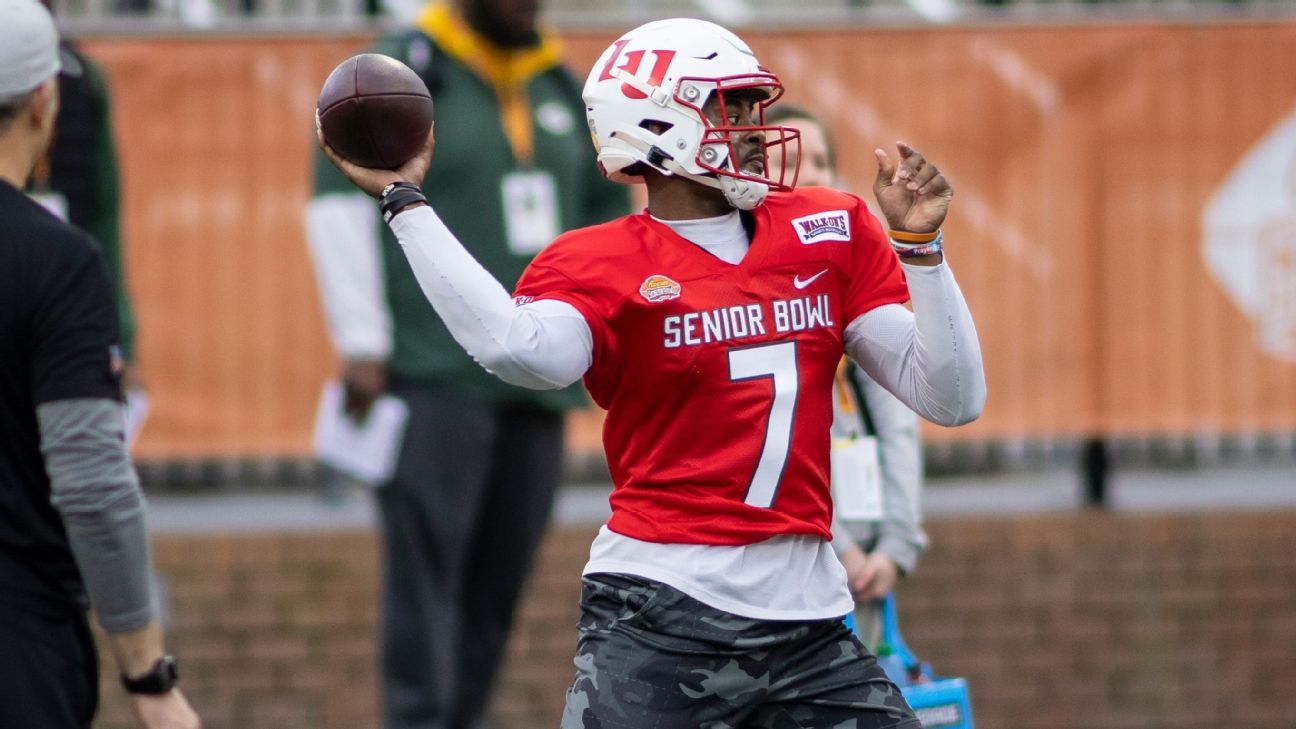 PHILADELPHIA — Draft season officially got underway last week, as the NFL world descended on Mobile, Alabama, for the Senior Bowl.

Philadelphia Eagles general manager Howie Roseman and coach Nick Sirianni, armed with three first-round picks in April’s draft, were among the evaluators roaming the sidelines. Philadelphia has drafted two players from the Senior Bowl in the first round over the past five years (WR DeVonta Smith and OT Andre Dillard), and has found success in the second round during that stretch with Senior Bowl attendees Jalen Hurts (QB), Dallas Goedert (TE) and Landon Dickerson (OL).

Who might they have their eyes on from this class? Which players shot up to where they are picking in the first round (Nos. 15, 16 and 19 overall) with strong performances? And what prospects are now out of reach?

The Eagles’ decision-makers entered the offseason with the mindset that Hurts is their starter in 2022. “Jalen knows where he stands with us. He knows he’s our quarterback,” Sirianni said in January.

While that remains the most likely outcome, we know the Eagles are constantly looking to add talent to the position.

Reid previously identified Willis as the best fit for Philadelphia among this group of quarterbacks. And given that he needs time to develop, the case can be made for adding Willis to learn behind Hurts and maybe even backup Gardner Minshew for a season or two. The QB play at the Senior Bowl was “underwhelming across the board,” per Reid, due in part to the bad weather in Mobile for part of the week, but Willis was the most impressive.

“I thought he had the strongest arm of any of the quarterbacks down there,” Reid said. “His accuracy was a little bit scattershot throughout the week but when he was able to put it all together Wednesday, I thought he separated himself from the bunch.”

“There were a lot of unanswered questions [about this quarterback class] going into it, and it kind of feels a lot of the same way exiting Mobile, too,” Reid said.

An ‘explosive’ option at No. 15 overall

With Hurts in place, there’s no need to force the issue. The likely right play is to focus on other areas of need, including edge rushers. The Eagles finished 31st in sacks last season with 29. It’s time to bring in reinforcements, particularly given that 33-year-old DE Brandon Graham is coming off an Achilles rupture — though Roseman said they “see a role for him going forward” — and DE Derek Barnett is a free agent.

Fortunately for Philly, this is considered a strong defensive end class. Nobody exits the Senior Bowl hotter than Florida State edge rusher Jermaine Johnson II, whom Reid has going No. 15 overall to the Eagles.

“I think he was the best player of any on the offensive or defensive side of the football,” said Reid, noting that Johnson’s power, explosiveness and solid repertoire of moves stood out. “I think Jermaine Johnson is definitely somebody who could intrigue them. I think I did see Howie Roseman on the sidelines so he got a close-up view of what Jermaine was able to put together.”

Outside of Johnson and UConn interior defensive lineman Travis Jones, no prospect exited Mobile as a bigger winner than Oklahoma defensive tackle Perrion Winfrey, in Reid’s view. The former No. 1 junior college recruit was part of a defensive line unit at Oklahoma that rotated players frequently, and he lacked consistency, but the 6-foot-4, 292-pound Winfrey shined against his peers at the Senior Bowl when he received a steady dose of work.

“His first-step explosiveness is off the charts. He has really good hand usage and is really able to marry those things together,” Reid said.

Reid sees Winfrey’s ceiling as being selected in the back end of the first round, but currently has him going 57th overall to the Buffalo Bills. The Eagles hold the 51st pick in the second round. And while defensive tackle might not seem like a pressing need, Philly likes to over-invest along the offensive and defensive fronts.

Other defensive linemen who stood out at the Senior Bowl included Dominique Robinson of Miami (Ohio) and DeAngelo Malone of Western Kentucky, Reid said.

The Eagles definitely need secondary help. Reid has Philadelphia picking cornerback Ahmad “Sauce” Gardner out of Cincinnati 16th overall. As far as Senior Bowl prospects, he likes Clemson’s Mario Goodrich as a fit for the Eagles. Goodrich is a projected third-round pick at the moment, per Reid.