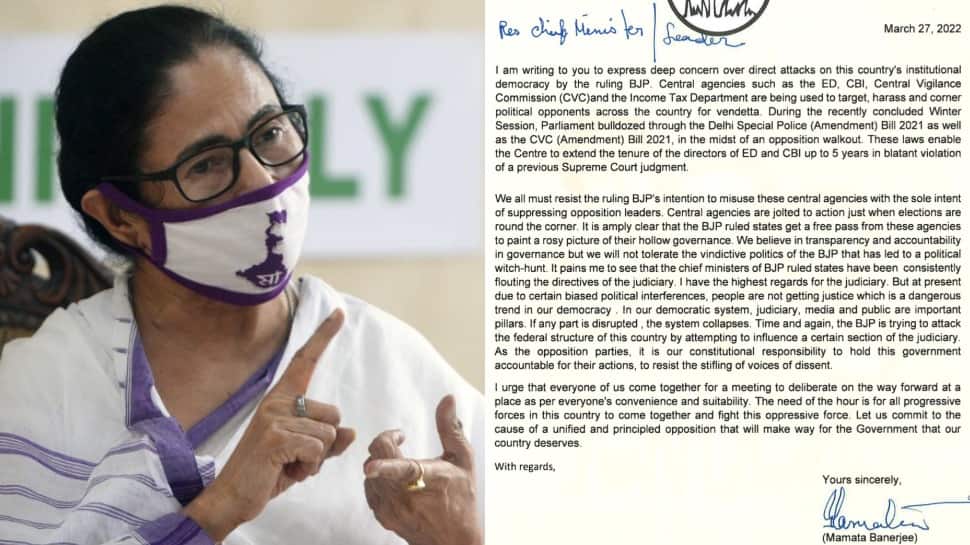 New Delhi: West Bengal Chief Minister Mamata Banerjee has written a letter to all Opposition leaders and her non-Bharatiya Janata Party counterparts and requested them to unite to fight BJP’S “hollow governance”.

In a letter dated March 27, 2022, the Trinamool Congress (TMC) chief said that the need of the hour is for all progressive forces in this country to come together and fight this “oppressive force”.

She also called for a meeting to discuss strategies to take on the BJP and commit to the cause of a unified and principled opposition that will make way for the “government that the country deserves”.

“I urge that everyone of us come together for a meeting to deliberate on the way forward at a place as per everyone’s convenience and suitability,” the letter shared by TMC on its Twitter account on Tuesday (March 29) read.

Slamming the BJP-led Centre’s alleged vindictive politics, Mamata iterated that the democratic fabric of the country was being attacked with the use of agencies such as the Enforcement Directorate (ED), Central Bureau of Investigation (CBI) and Central Vigilance Commission (CVC) to “harass and corner political opponents”.

She alleged that the saffron party has “time and again, repeatedly attacked the federal structure of our country” and now, it’s time to unitedly fight this oppressive regime.

“I am writing to you to express deep concern over direct attacks on this country’s institutional democracy by the ruling BJP,” she said.

Our Hon’ble Chairperson @MamataOfficial writes to all Opposition leaders & CMs, expressing her concern over @BJP4India‘s direct attacks on Democracy.

BJP has repeatedly attacked the federal structure of our country and now, it’s time to unitedly fight this oppressive regime. pic.twitter.com/Ib3VbuSdbK

“Let us commit to the cause of a unified and principled opposition that will make way for the government that our country deserves,” Mamata added.

“These laws enable the Centre to extend the tenure of the directors of ED and CBI up to five years in blatant violation of a previous Supreme Court judgment,” she said.

Alleging that the central agencies “jolt to action” whenever elections are around the corner, she urged the parties to resist the BJP’s intention to misuse the agencies to suppress the opposition.

“It is amply clear that the opposition is being targeted, and the BJP-ruled states get a free pass from these agencies so that a rosy picture of their hollow governance can be painted,” the letter stated further.