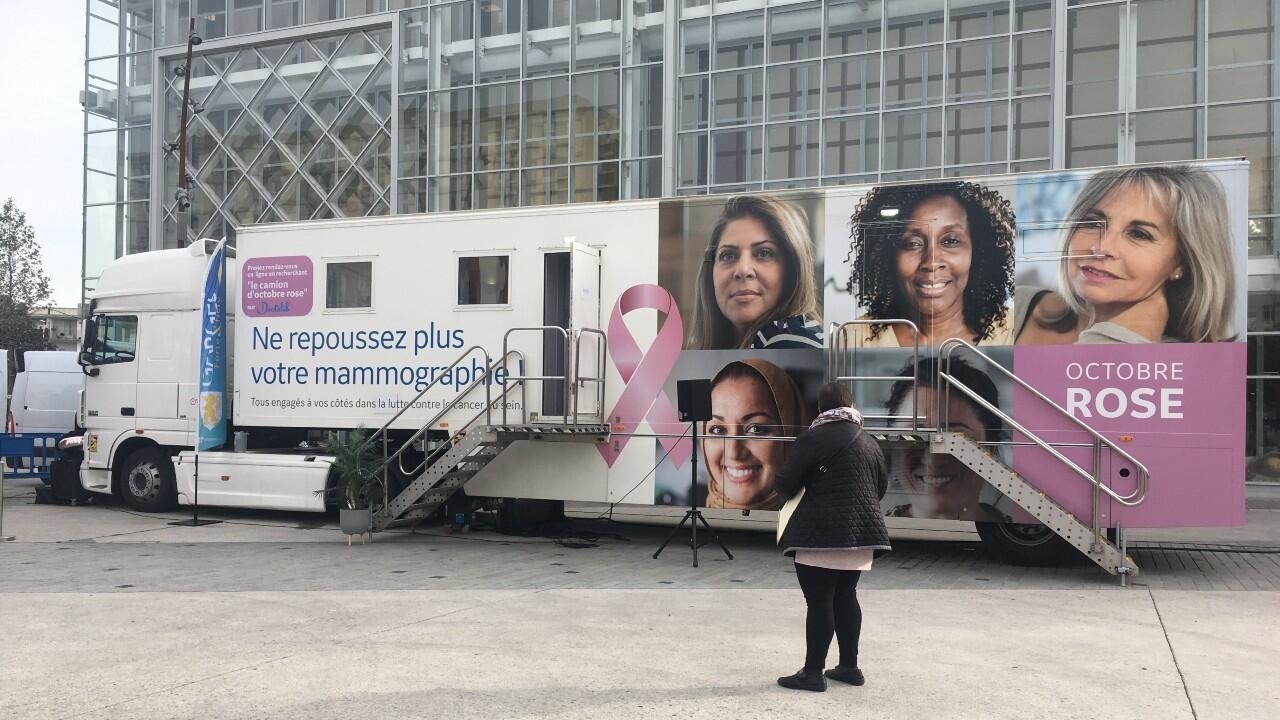 Early detection is one of the most effective weapons against breast cancer, which affects 58,000 women every year in France. In 2020, only 42.8% of women took part in state-sponsored screening campaigns. In the Paris suburbs, an association has launched a mobile screening unit nicknamed the ‘Mammobus’ to reach out to those who are reluctant or unaware that they can benefit from free screening. It is part of Breast Cancer Awareness Month, marked every year in October by the World Health Organization (WHO).

“Don’t delay your mammogram any longer”. This is the message written in large letters on one of the large pink vehicles of Bus de la Santé, orHealth Bus association, parked in front of the town hall in Garges-lès-Gonesse, a suburb north of Paris.

A young woman approaches the bus but is clearly hesitant to step inside this mobile radiology centre. “You can have a free consultation with a general practitioner and then a mammogram with the radiologist,” explains Murielle Lamour, who oversees public health prevention at the town hall, which is participating in the project. The young woman says she understands they are offering breast cancer screening but explains that it scares her. She walks away but promises to come back in the afternoon. It’s a good thing the mobile screening unit will be parked here until 5pm.

Inside one of the two buses set up on the town hall square, radiologists are giving free screenings. “For half the people we’ve seen this morning, it was their very first mammogram, even though some women are over 50,” says Karima, the technician.

Every year, the state tries to fight breast cancer with major advertising campaigns alerting to the importance of early screening for this disease, which continues to kill nearly 12,000 women a year in France. It remains the leading cause of cancer deaths among women. For the past 27 years, October has been the month dedicated to the fight against this scourge.

When detected early, breast cancer can be cured in nine out of 10 cases. To encourage screening, women in the most affected age group of between 50 and 74 receive a free mammogram every two years. Information about this non-compulsory medical examination is sent to them by post by the Social Security.

It remains their individual responsibility to make an appointment and, in 50% of cases, they do not. Worse still, with the Covid-19 pandemic, the national rate of participation in organised screenings has fallen to 42.8%. “If there has been no big campaign to highlight the importance of this and if they have difficulty finding a radiologist because of a shortage of medical facilities, the letter [from the Social Security] will be thrown in the bin,” laments Khalid Zaouche, who founded the Mammobus.

The idea of his association is to go directly to these women, to park as close as possible to their homes, or the places they frequent, to raise their awareness about the critical importance of screening early. This approach makes sense because, according to the national health agency, Santé Publique France, several studies show that women who are disadvantaged in terms of “level of education, income and employment” are less likely to be screened for breast cancer.

Since its launch in 2018, the Health Bus has also carried out other operations in the heart of working-class neighbourhoods in the field of oral health and performing screenings for lung cancer, tuberculosis and Covid-19.

“Women are often caught up in family life, they look after the children and forget to look after themselves. In the scale of all the emergencies they have to manage on a daily basis, this is lower down on their list of priorities,” says Lamour.

Most of the women who arrive on this October morning were persuaded to come by the town’s social centres and local support structures. This is the case of 37-year-old Mariam*, sitting in the Mammobus waiting room. The mother of Malian origin was referred by the Maison des Langues, a municipal establishment where she is learning French. In addition to the mammogram, a second bus offers consultations with a general practitioner and workshops on self-examination on a mannequin.

For Mariam, this is a first in many ways. She is not familiar with this technique, which consists of placing her hands on her breasts to detect any nodules. “Every woman knows her body best,” says another resident of Garge-lès-Gonesse, waiting for her turn. “A friend taught me how to do it, my gynaecologist had never told me about it.”

“It often happens that women find their cancer by examining themselves”, confirms Dr Mohamed Salem, a radiologist on the Mammobus. This is why the health authorities recommend that women monitor their own breasts between two mammograms, paying attention to the slightest changes such as the appearance of lumps in a breast or armpit, an abnormal discharge, or breasts that increase in size for no particular reason.

After the visit to Garge-lès-Gonesse, the Mammobus will stop in several towns in the Ile-de-France region around Paris during Breast Awareness month. If the experiment is successful, the operation could be extended to other areas throughout the rest of the year.

*Her first name has been changed

This article was translated from the original in French.