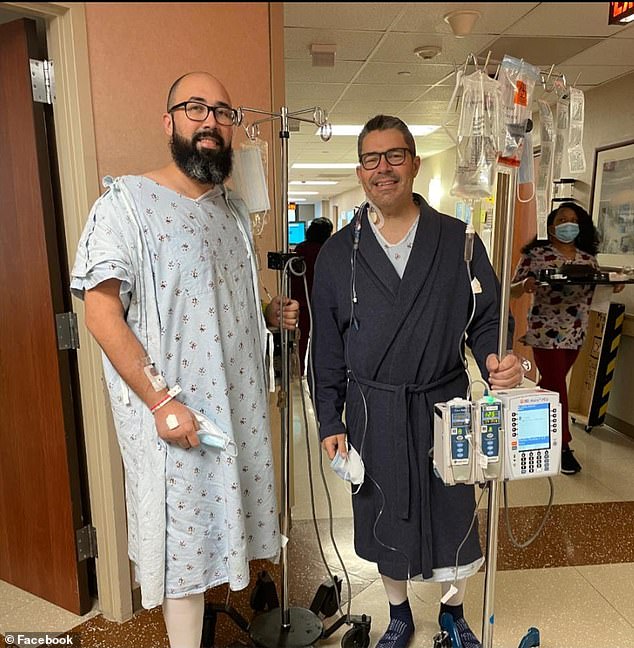 In a time of great need, a stranger came to the aid of a North Carolina man, changing his life forever and creating an everlasting bond.

As a result of his diagnosis he would either need to find a kidney donor or undergo the laborious process of dialysis in order to continue living.

After an online campaign, Chris Perez, 40, who was a stranger at the time, reached out to donate his kidney, saving the life of someone who is now a close friend of his.

Steve Sanders (right), 46, was suffering a rare kidney disease that required him to receive a donation in order to avoid dialysis. Chris Pereze (left), 40, who he had never met before, say Sanders’ story on social media and offered to become a donor 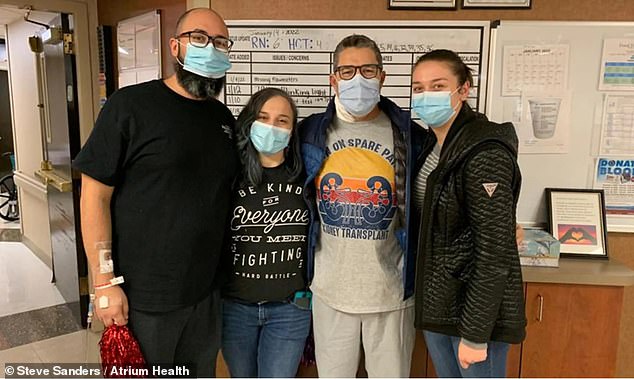 Sanders (middle-right) is a single father to two young children, which inspired Perez (left) to reach out 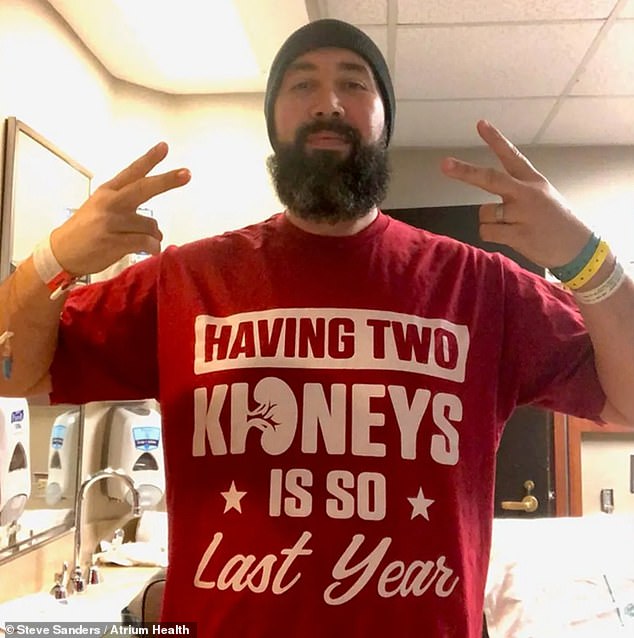 Perez (pictured) is a father himself, and he and Sanders bonded over their mutual experiences in fatherhood

In an interview with Atrium Health, the hospital which performed the procedure and Perez’s place of work, Sanders described himself as an active father.

Dialysis can be devastating and extremely taxing to a person, and it rarely does much more than extend a person’s life span by a few years.

If he went that route, he would not be able to take part in his children’s lives the way he currently is able to. 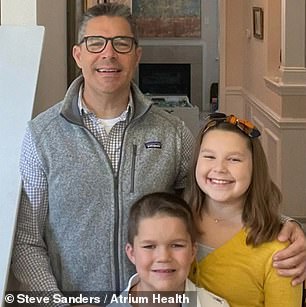 Sanders is a father to two young children (pictured), a feared that going on dialysis would be too taxing and hurt his ability to raise his kids

‘I didn’t think dialysis would afford me the ability to do the things I’m able to do with my children now,’ Sanders said.

‘Finding a match for a live kidney meant it would likely last twice as long compared to a cadaver kidney and we would have the benefit of testing the donor beforehand.’

He said he received support from family and friends throughout his ordeal, and many even offered to be a donor, though none were a good match.

‘I first looked to family, friends and those in my close circle, but they either didn’t qualify or weren’t a match,’ he said.

‘I knew the process would take time but as time went on, it became more apparent I would need a new kidney soon.’

After failing to find a kidney within his inner-circle, he turned online. He created a website detailing his situation, and promoted it on social media websites.

Perez, who serves as director of volunteer services at Atrium’s Carolinas branch, saw Sanders’ story and was inspired. 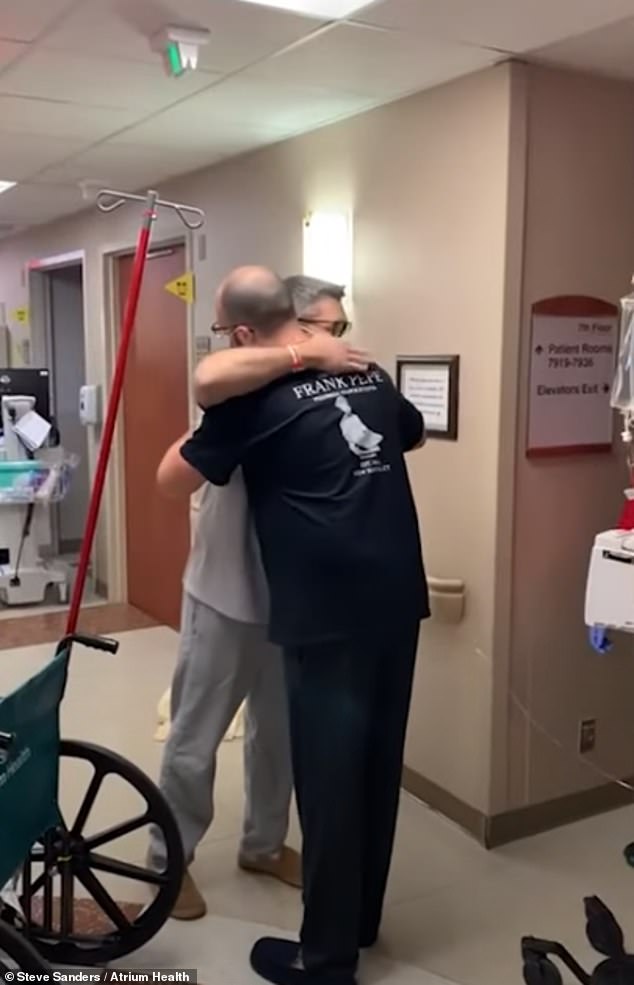 Perez and Sanders quickly became close friends, and in January 2022 the operation to donate the kidney was successfully completed. Pictured: The men hug after completion of the operation

‘My wife saw Steve’s post and brought it to my attention…I read through his story and saw that he, too, had children,’ Perez said.

‘It was something about his story as a dad, and I was trying to imagine a situation like that in which I would need help.’

‘I didn’t know him but thought let’s give this a try — I would want someone to do this for me.’

Perez was determined to be a match by doctors after he underwent regular testing.

He got into contact with Sanders, and the two quickly bonded over their similar educational backgrounds and mutual experiences as fathers.

Sanders said it was clear Perez was doing what he did to help a fellow father continue raising his kids. 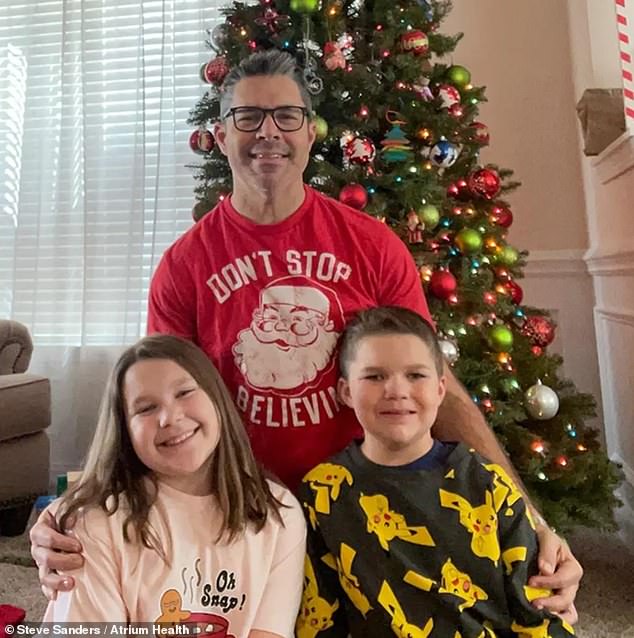 ‘It’s a chance at continuing to have a normal life with my kids. It shows Chris’ commitment to being a father and allowing me the same chance,’ he said.

In January 2022, doctors successfully completed the kidney transplant, and both men were able to go home to recover after a few days.

‘The fact that Chris was willing to subject himself to an operation and donate to a stranger…it’s a gift you can’t put a value on,’ Dr Kent Kircher, who performed the surgery at Atrium, said.

People who suffer from UKD have kidneys that fail to properly dispose of uric acid through urine.

Eventually, it will build up in the kidneys and create gout, before finally transforming into kidney disease.

Over time, a person with UKD will have their kidney’s fall apart, and die as a result.