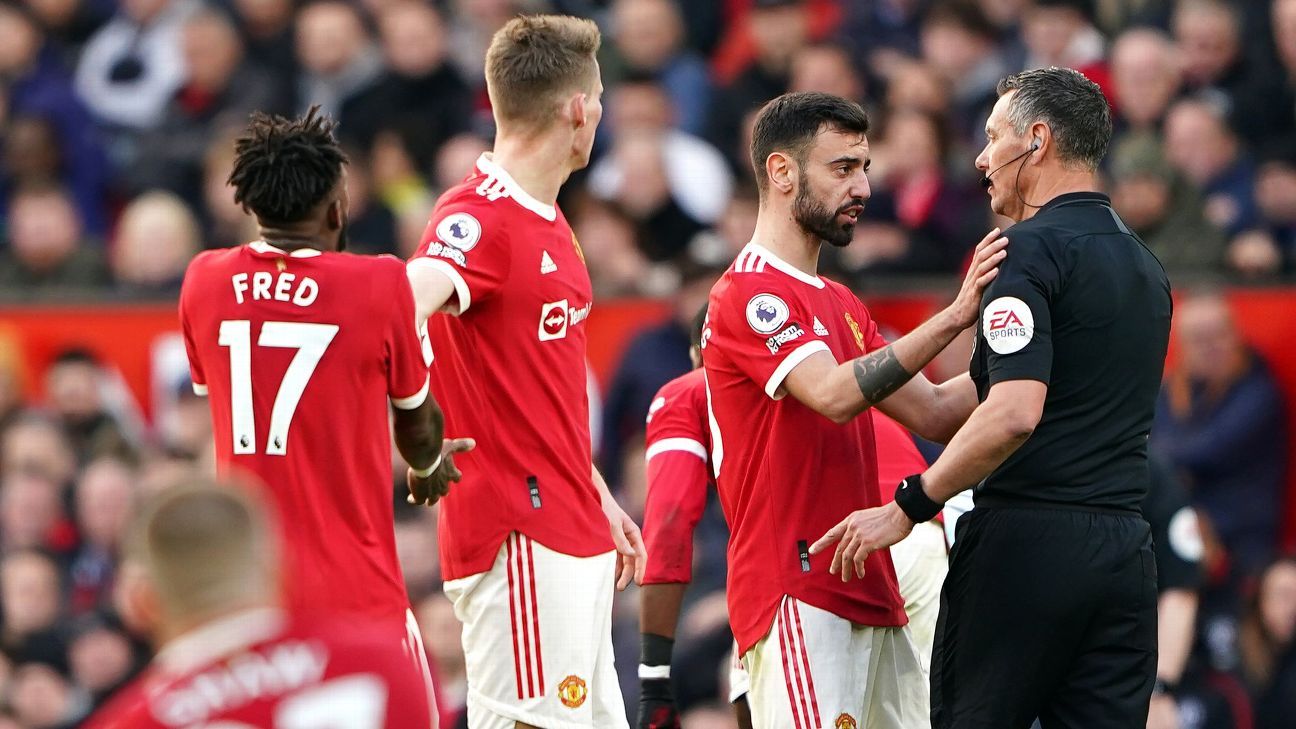 MANCHESTER, England — If Erik ten Hag or Mauricio Pochettino want to know how big a job it will be to turn Manchester United around, they need only watch a replay of the 1-1 draw with Leicester City.

For the Old Trafford club, this has become a season drifting towards the Europa League — or worse — and which is being played out by a squad of players seemingly devoid of confidence and belief. Good luck to whomever takes over from Ralf Rangnick in the summer; you have got your work cut out.

The new manager will probably not have to concern himself with the Champions League for at least a year after another result that sees United slip further away from the Premier League‘s top four. Indeed, it would have been worse without David De Gea’s wonder save to deny Wesley Fofana and VAR ruling out a late James Maddison goal.

It was, nevertheless, a disastrous afternoon for the home side. Maddison, who was the game’s standout player and head and shoulders above anyone wearing red, said afterward that Leicester were “disappointed” to leave with just a point and it was hard to argue.

United’s day was summed up in the third minute of second-half stoppage time when a good chance fell to Jadon Sancho at the back post, but he could only scuff a shot against his own leg and out for a goal kick. Soon after, Anthony Elanga and Marcus Rashford got in each other’s way and another chance went beeging.

There was nothing to suggest Rangnick’s team are capable of clawing themselves into fourth over the final eight games, particularly with games against Liverpool, Arsenal and Chelsea to come. Arsenal are three points clear with two games in hand and West Ham, in eighth, are only three points behind United.

“As long as it’s mathematically possible, we’ll try to win as many games as possible,” said Rangnick. “Obviously, after dropping two points, our position isn’t better after this result. It’s our obligation to finish the season on the best possible note.

“The second half was the better one; we were struggling to find the rhythm in the first half possibly because of the international break,” the interim manager added. “If I look at the whole game, I think the draw is OK. We had opportunities to score the winning goal, but so did they.”

Speaking at his news conference on Friday, Rangnick insisted his players are suitably motivated to finish the season well, but there was little evidence here to back it up, particularly in the opening 45 minutes. Without Cristiano Ronaldo or Edinson Cavani, Bruno Fernandes played as a makeshift No. 9 and, barring his shot that Kasper Schmeichel saved with his legs, United offered nothing before half-time.

Leicester deserved their lead when Kelechi Iheanacho headed in Maddison’s cross after 63 minutes and were unlucky when United equalised three minutes later; Fernandes’ shot came back off Schmeichel and fell to Fred, eight yards out.

Thereafter, Schmeichel did not have another save to make and Leicester looked more likely to score a winner. United have won just three of their last 11 games in all competitions and have not won any of their last five against Brendan Rodgers’ team.

“It was a good performance away here, disappointed to not win and that is always a good sign,” the Leicester boss said. “The football was very good but we passed it well a lot of the time and got into some good areas. I thought we were very good in large spells of the game.”

When Leicester dropped out of the Europa League and into the Europa Conference League in December, Rodgers admitted he did not know what the competition was. It may be time for United fans to familiarise themselves because, on current form, they will be fortunate to finish fifth.

The bigger danger, however, is that the malaise drags over into next season. Echoing his pregame comments, Rangnick’s programme notes urged his players to “build momentum to feel the benefits when August comes,” but the German‘s rallying cries are not having the desired effect.

Instead, he got more of the same and for large parts the game mirrored a dire 0-0 draw with Watford at the end of February. It was hard to believe United had been preparing for the 18 days since their last fixture and, while they have a week to get ready for a trip to Everton, each passing game mean less.

There is faint hope that qualifying for the Champions League remains possible, if not probable. As a miserable season limps towards its conclusion, it is all they have left.