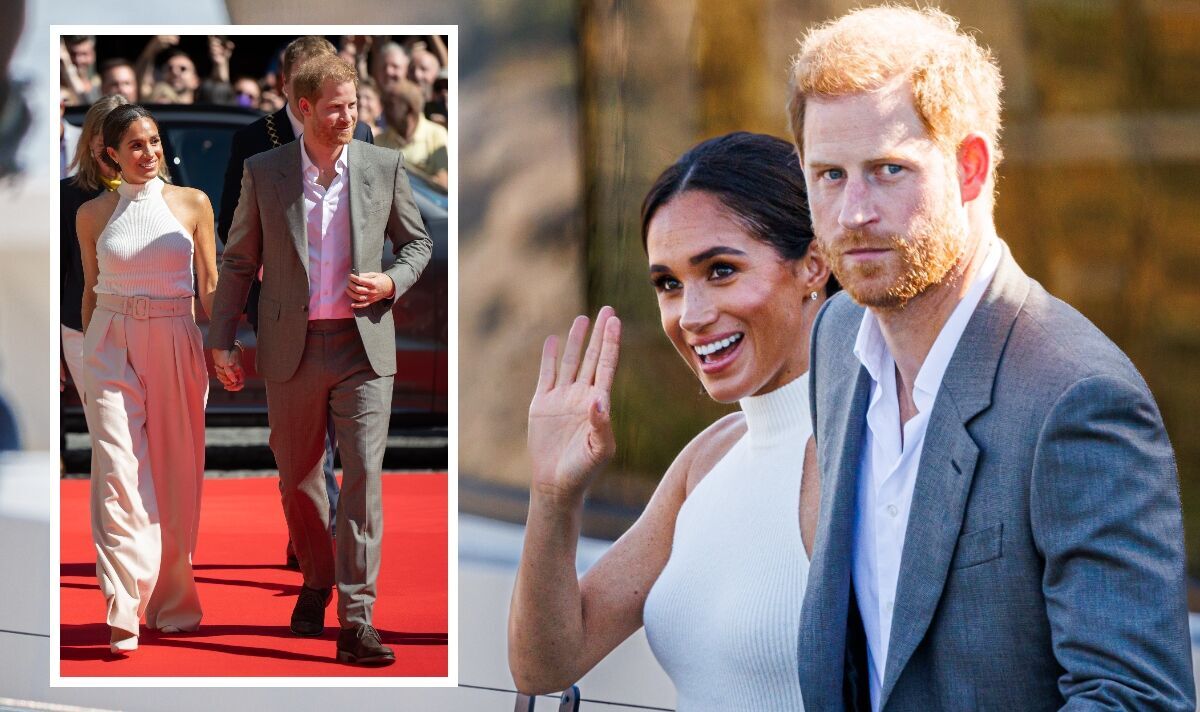 Meghan Markle, 41, and Prince Harry, 37, arrived in Dusseldorf in Germany on Tuesday to promote the next Invictus Games which will appear in the country. The Duke and Duchess of Sussex received a town hall reception and a boat cruise on the Rhine. Although they are private citizens, the Sussexes were treated like heads of state.

Meghan and Harry had an hour-long cruise on the Rhine aboard the £13million MS Rhein Galaxie.

The Duke and Duchess met officials and potential competitors in Dusseldorf on Tuesday to mark the one-year countdown to the 2023 Invictus Games in the city.

The couple could be seen smiling and greeting the crowds that gathered in Dusseldorf.

Meghan even broke royal protocol by engaging in selfies with fans, which members of the Royal Family are not meant to do.

“His arrival expression here seems to show a glimpse of that wariness.

“Harry’s eye expression looks haunted and he gazes around as though unsure of his reception, while Meghan hails the fans with a confident smile and a raised way that seemed to suggest the expectation of a positive response,” the expert claimed.

How does Harry show his “wariness”?

Judi explained: “We’ve seen Harry’s self-touch, checking rituals increase here and in the UK, with constant holding and touching of his clothing, hinting at a desire to self-comfort.

“But then the red carpet and the waiting crowds do seem to have brought out the couple’s royal side and Harry’s more relaxed side.

“This is where they both begin to fall into very similar behaviour that we used to see when they appeared as royals in the UK,” Judi suggested.

Harry founded The Invictus Games to aid the rehabilitation of injured and sick military personnel and veterans across the globe, by giving them the challenge of competing in sporting events similar to the Paralympics.

The Dusseldorf games will take place in September 2023, with more than 500 competitors from 21 nations across 10 sports.

Harry and Meghan’s outing on Tuesday came after they made their first public appearance in the UK since returning for the Queen’s Platinum Jubilee.

The Duchess of Sussex gave the keynote address in Manchester on Monday for the One Young World summit.