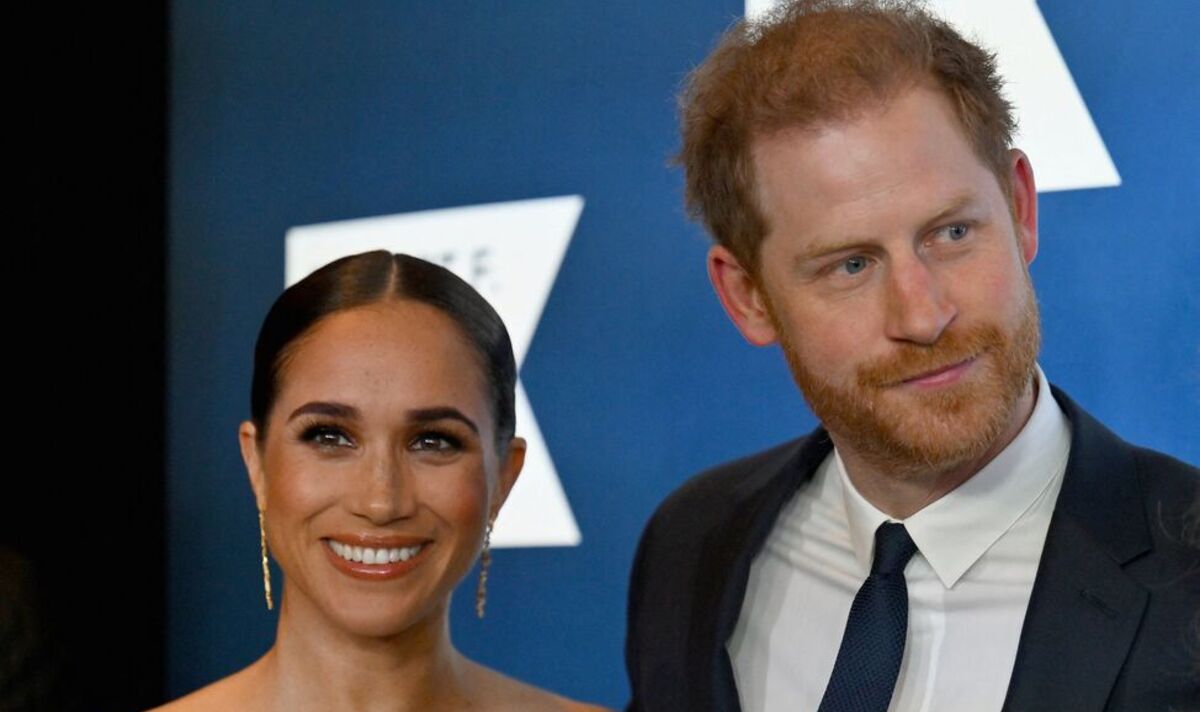 Meghan Markle and Prince Harry might not be senior working royals anymore, but over the past few years since they stepped back, they have appeared in public for several causes. Jesús Enrique Rosas, also known as the Body Language Guy on YouTube took a look at several public appearances the Duke and Duchess of Sussex made in the run up to their royal departure and afterwards, and he noticed a signal Meghan uses to “stop Harry from talking”.

January 2020 was when Meghan and Harry announced to the world they would be stepping back as senior working royals. Jesús started his video by looking at footage and images of the couple attending the Wellchild Awards the previous year.

“But Harry was still talking to them, in a quite engaging way, and then Meghan just stands up and literally, and silently commands Harry to stop and stand up just using her body language, and this is not the only time she’s been caught in camera interrupting Harry out cold.”

Jesús then referred to a video from Commonwealth Day in 2019 when Meghan “does exactly the same” as before – “silently commanding” Harry. The body language expert also mentioned the “red dress video” which was when Meghan wore a bold red Carolina Herrera dress for her appearance at the Annual Salute to Freedom Gala in New York City, on November 10, 2021.

Jesús said: “She [Meghan] uses that hand cue to get Harry going and of course, the direct ‘shut your mouth’ in Oprah’s interview. So, Meghan controlling Harry’s behaviour, in the most public way possible, is nothing new.

“But this time [at the Wellchild Awards] is interesting because there were previous clues that foreshadowed this.

READ MORE: Harry shows ‘clear’ signs of ‘happiness’ speaking about life in the US

“Such as when the nice lady hands them two bracelets. Can you spot the reaction in Meghan’s face? Yes, there’s her classic jaw clenching. And I don’t think there was any valid reason for her to express that emotional display at that moment.”

Jesús added: “This is one of the reasons I always mention that one of the first skills you have to develop when reading body language is to pay attention to where the action is.

“In situations like this, it is really common to look at the hands getting the bracelet, but where the real action is, is on the face.

“On the other hand, pun intended, when she was listening to the lady talking, you can spot that her hands were restless, as she was pinching the flesh right beside her nails. That’s a common signal of anxiety and impatience, and really easy to spot.

“It doesn’t help at this moment, her smile was not the most genuine…her cheeks lack that pressure into her eyes. Of course, you can’t have a full smile all the time, but I’ve mentioned a couple of times that when our faces are telling the truth, they work like a perfect, balanced system.”

The body language expert continued: “And in this case, her lip corners are pulled up in a way that is more intense than her eyes.

“In fact, she does a much better job a few seconds later. This smile still… doesn’t feel like it, but the different parts of the face involved are working together, much better than the previous one. The only problem is less than a second later, she tries too hard.

“Because we can put all three smiles, side by side, so you can spot that in the span of just a few seconds, she has this wildly different display of intensities. Again, that’s a sign that the person is trying to come out as nice and engaging.”

He said: “Sadly, the execution is all over the place and it just raises suspicions. When Meghan is going to fix her hair, her hand gesture almost blocks her face completely from view.

“It’s literally in the middle of eye contact in this case, so it’s another very subtle signal that she was not comfortable and most probably wanted to be anywhere else.

“And another common signal that the person doesn’t want to be there is a long blink – Meghan does one of those really long blinks right before standing up.

“Long blinks are really easy to spot and they tell you that either you’re becoming boring to the person [blinking], or they are not paying much attention to you, or they want to be anywhere else.”

Jesús then moves on: “Let’s focus on Harry for a second – notice his posture. He was really engaging, with his elbows resting on his legs, and paying complete attention to the lady in front of him.

“But Meghan is already past the point of no return, because even if she is trying to project attention, tilting her head to the one side, like she’s caring about what the lady is saying, her lips are really tense, pressed against each other.

“So Meghan does that signal that she applies so many times to end conversations – that is touching people.

“Whether it’s the [Commonwealth Day 2019] video, or the red dress [Annual Salute to Freedom Gala] video, or the Oprah video where she wanted Harry to stop talking she used that touch, that is more like a tap.

“And she does that on the lady – she taps her arm then goes to grab her purse,” he remarked. “And touching the lady and grabbing her purse means, let’s go. That’s why Harry immediately breaks that engagement, that conversation dynamic by leaning back.

“Now, he actually puts his hands on the armrest and moves his body that implies he is about to stand up, and Meghan does exactly the same, at the same time.

“So, for a split second, they were in sync. But then it goes out the window because Meghan just stands up and Harry, well… it’s obvious that he wanted to keep talking because that’s what his body language was projecting at that moment.

“This is another fascinating fact about couple dynamics and body language. We have just witnessed that Harry picks up the body language signals of Meghan, but Meghan either doesn’t pick up Harry’s signals, or she just doesn’t care about them,” Jesús suggested.