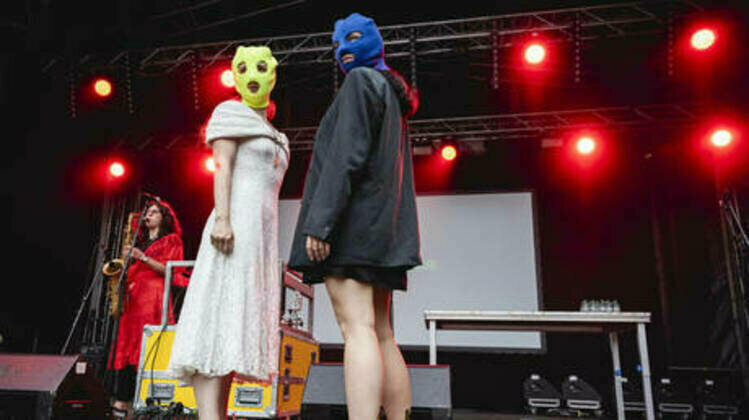 Members of the activist group Pussy Riot have been fined over an attempt to spray paint graffiti on a wall in the Swiss town of Koeniz. The three women described what they did as “anti-war” action and were briefly detained.

Maria Alyokhina, Lucy Stein, and Taso Pletner – were slapped with a fine of 400 Swiss franks ($407.89), Pletner confirmed on Twitter as she posted a photo of the group in front of a local police station.

Last Monday, the group attempted to spray the word ‘war’ and the distance between Switzerland and Ukraine on the wall to apparently remind people that “war is not far away.” Local authorities removed it on the same day and local official, Christian Burren told Der Bund newspaper that “graffiti with sexist, defamatory or political content” should be removed as quickly as possible.

The slogan, however, reappeared the following day, Swiss media said, adding that there was “no evidence” to suggest the controversial Russian group was responsible for it again. Burren said that it was apparently not a “politically motivated” action but a “provocation” by some unknown persons, adding that the local authorities were “not going to play a cat-and-mouse game” and would let the graffiti stay “for the time being.”

Pussy Riot left Switzerland on Wednesday and said they wanted to “spread our message to other countries,” adding that they were willing to “face further arrests” if needed.

Earlier, the Russian embassy in Switzerland protested some Swiss venues providing the group with places for their “performances.” Such actions usually include “obscene actions that are beyond any decency” and have nothing to do with art, the embassy said.