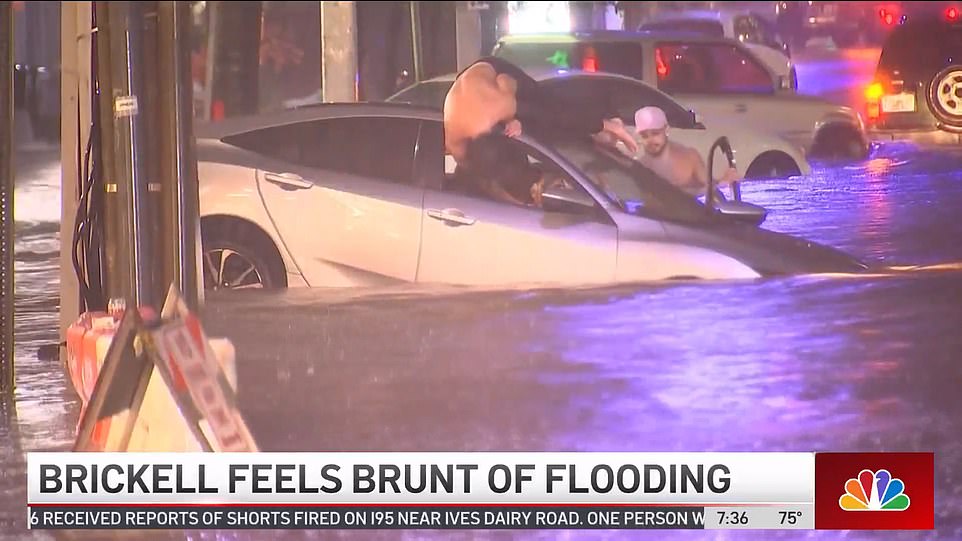 Miami faces up to 12 inches of rain as Tropical Storm Alex struck Florida on Saturday morning, trapping cars in flash floods as the cyclone barrels through the Sunshine state.

The Miami Fire Department said it was using six high water vehicles to pull people from stranded cars on flooded roads throughout the city starting as early as 6 a.m., with the city closing several roads that have been inundated.

‘We continue to urge you to not drive or walk through standing water,’ the fire department tweeted on Saturday morning. ‘Be safe and please allow us to assess the situation.’

Many have had to abandon their cars and escape through their sunroofs as waters rose throughout the morning and early afternoon.

Mario Robleto, a Miami resident who was finishing up his graveyard shift said he found his car completely submerged underwater.

‘I just came to mine and I just see the whole water inside my car and I didn’t turn it on because I knew it wasn’t going to work,’ Robleto told AccuWeather.

Local residents are also reportedly clearing storm drains with their own hands to fight back the flooding after finding the drains covered with leaves, debris and trash. 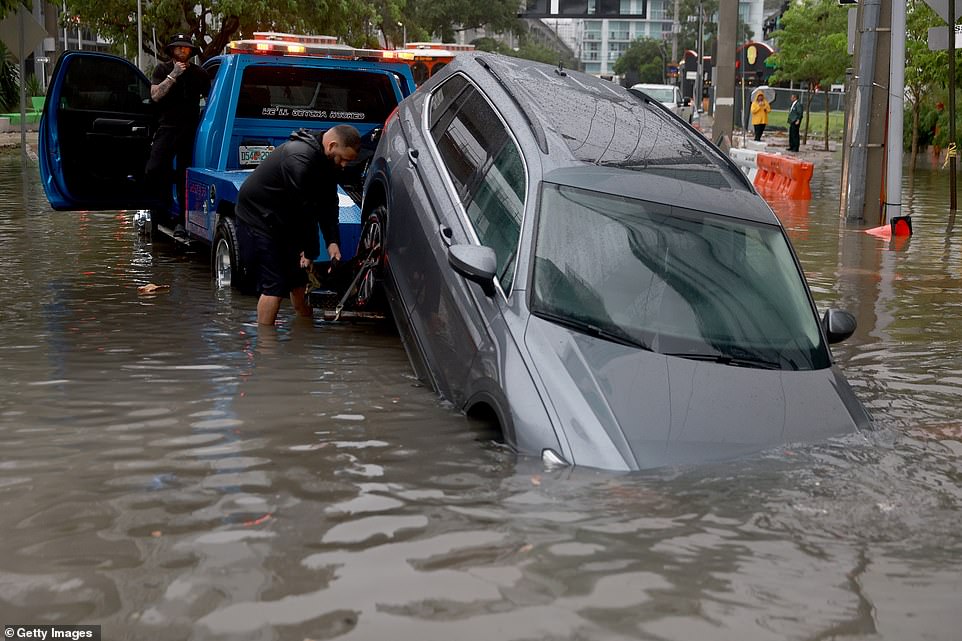 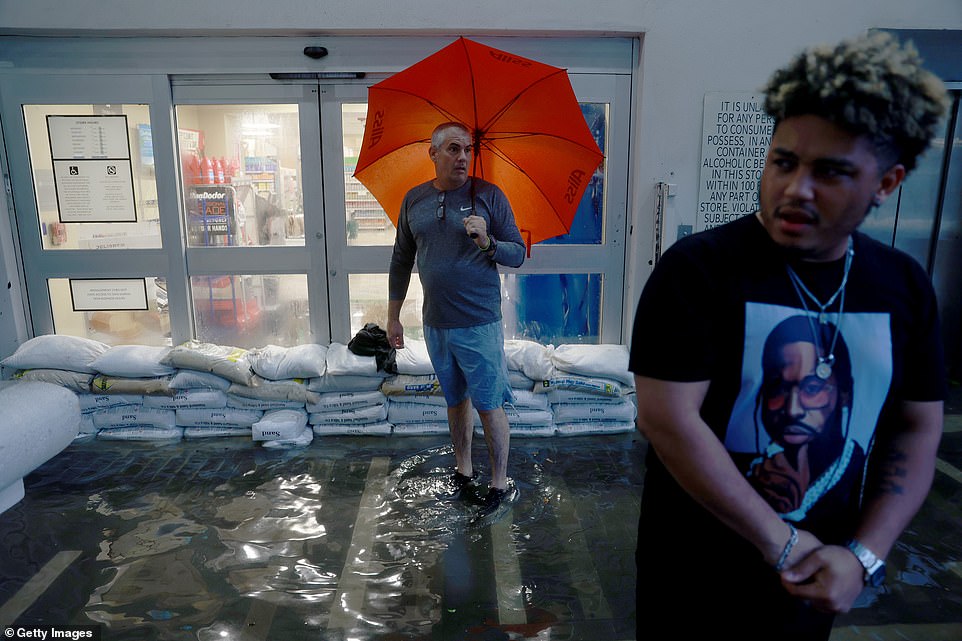 Pictured, residents taking shelter inside a store as flood waters began to seep into the Publix supermarket 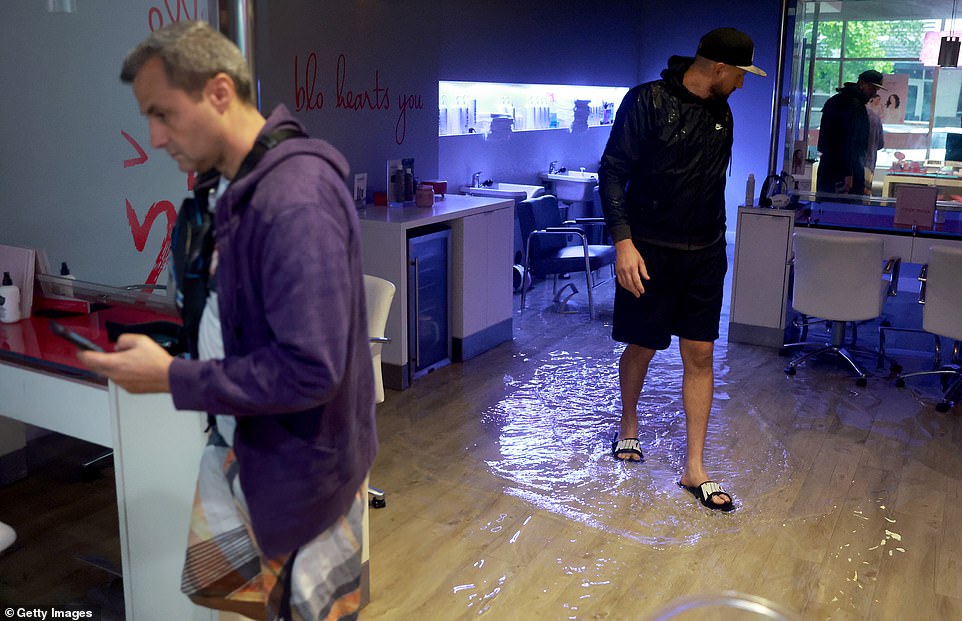 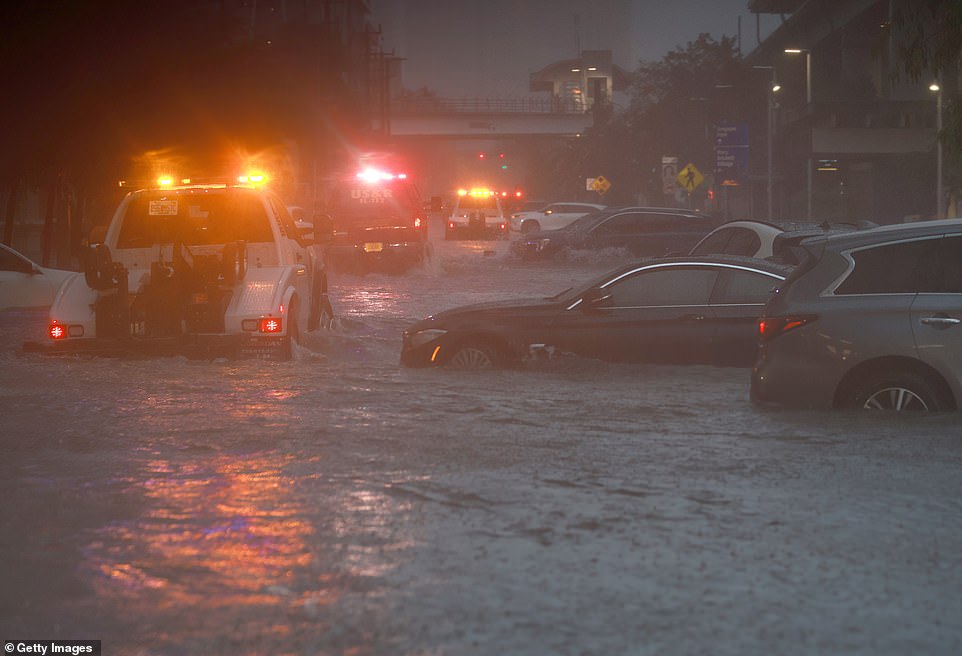 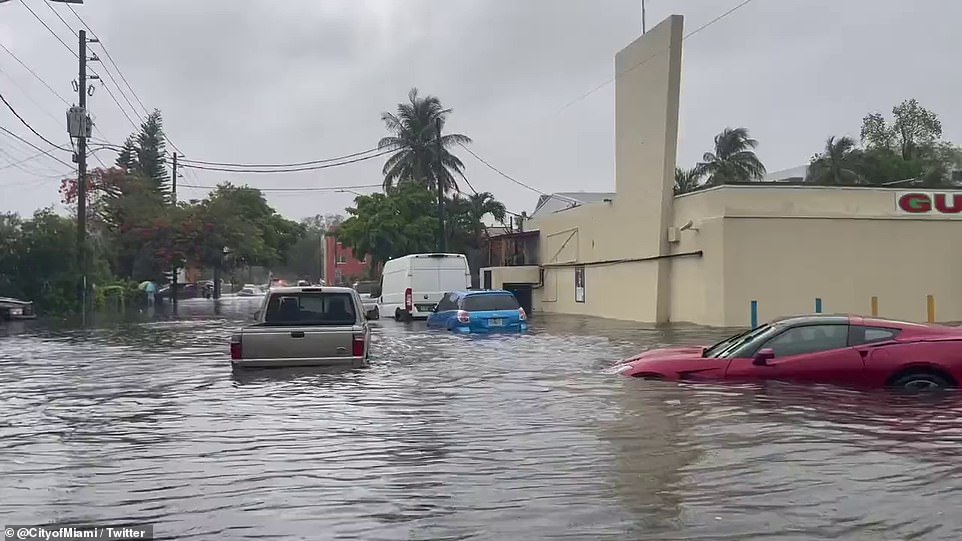 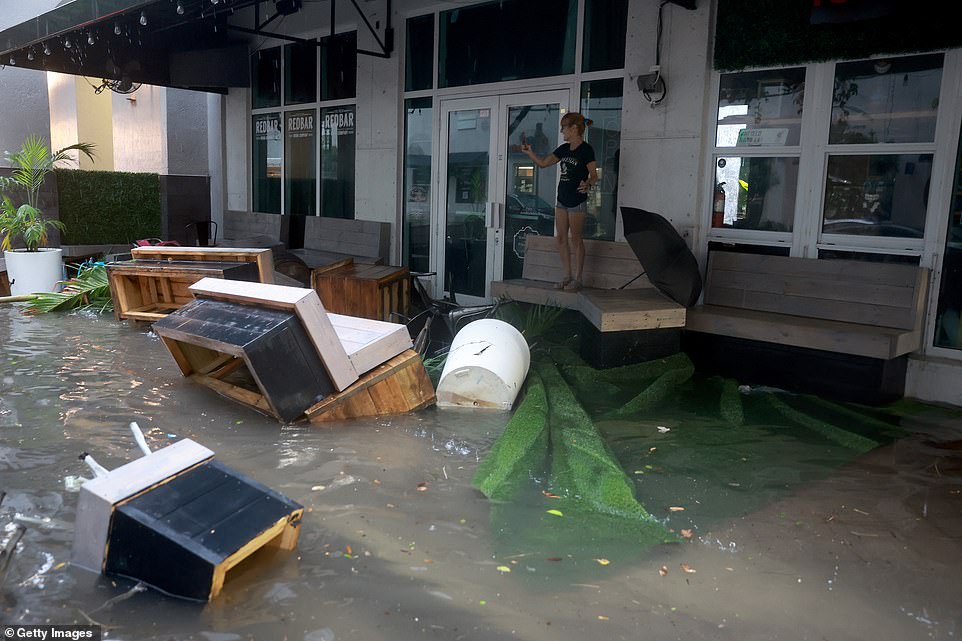 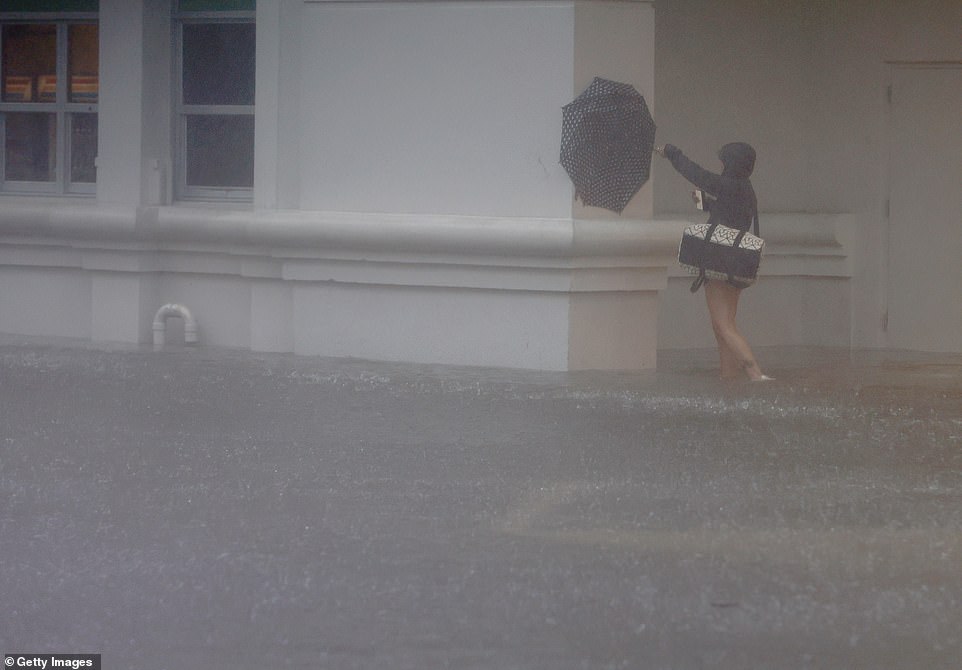 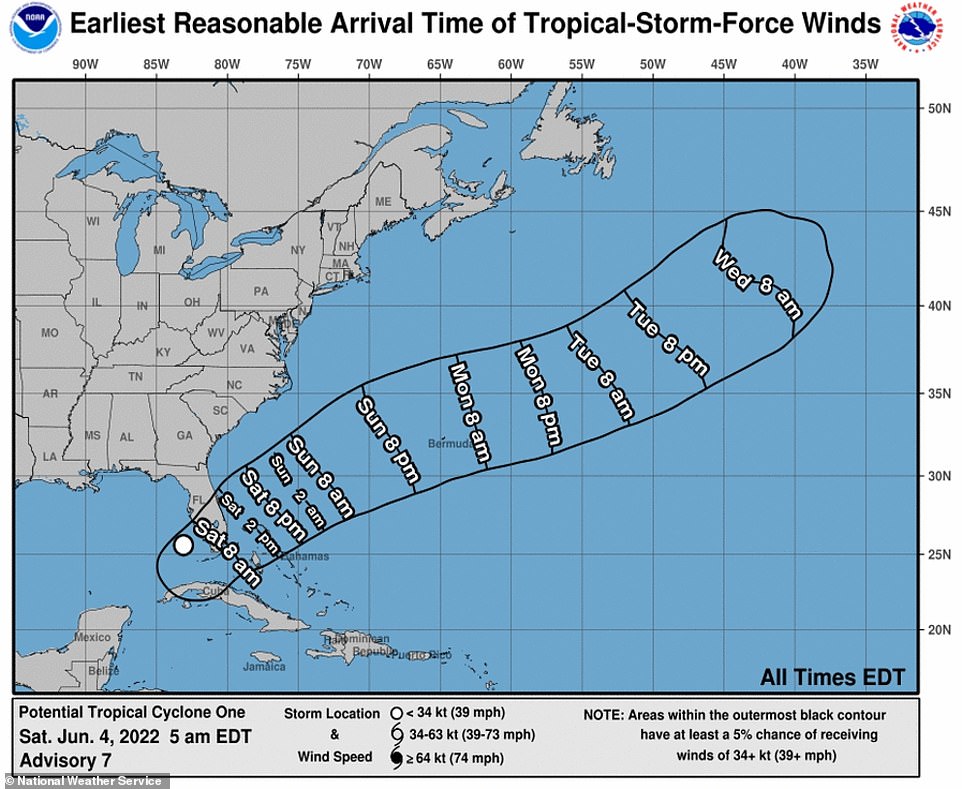 By 8 a.m., The National Weather Service had issued a flood warning for the area, which is scheduled to subside by 1 p.m.

The city of Miami also issued a statement for residents to contact the police department’s non-emergency number with the make and model of their stranded cars, along with the location where the car was left, in order to help track down the cars, which may have moved due to the flooding.

Robert Hernandez, an employee at a local towing company, told Weather.com that he’s received between 12 to 20 calls from drivers begging for help after their cars got trapped in the flooded roads.

‘A lot of flooding in Brickell, downtown and North Miami,’ Fernandez said. ‘A Ferrari was floating. A lot of water damage. A lot of cars (with) water damage.’ 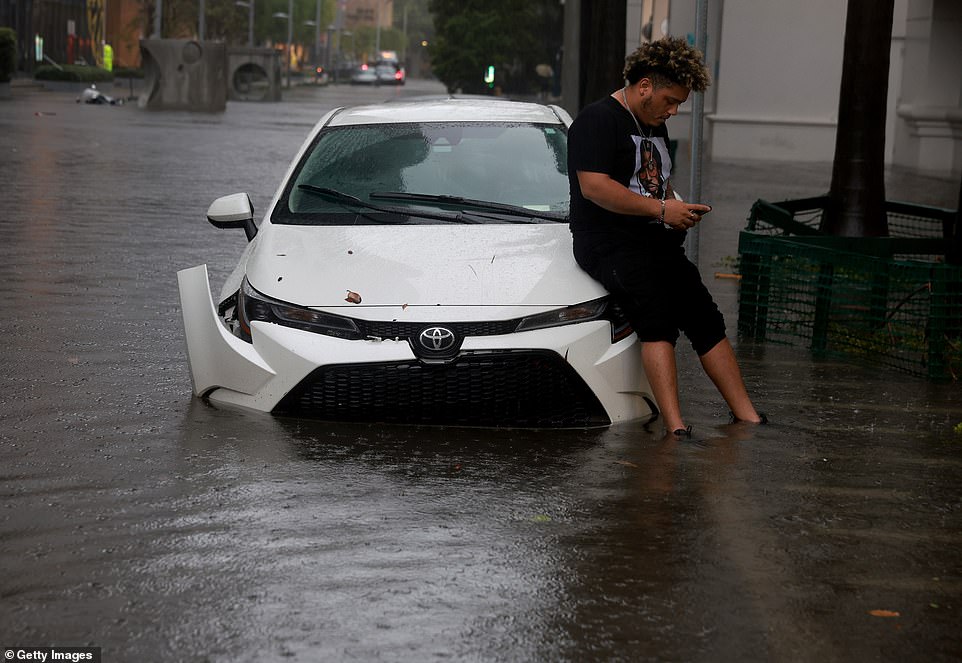 One resident is pictured standing beside his vehicle, which suffered a damaged bumper due to the storm 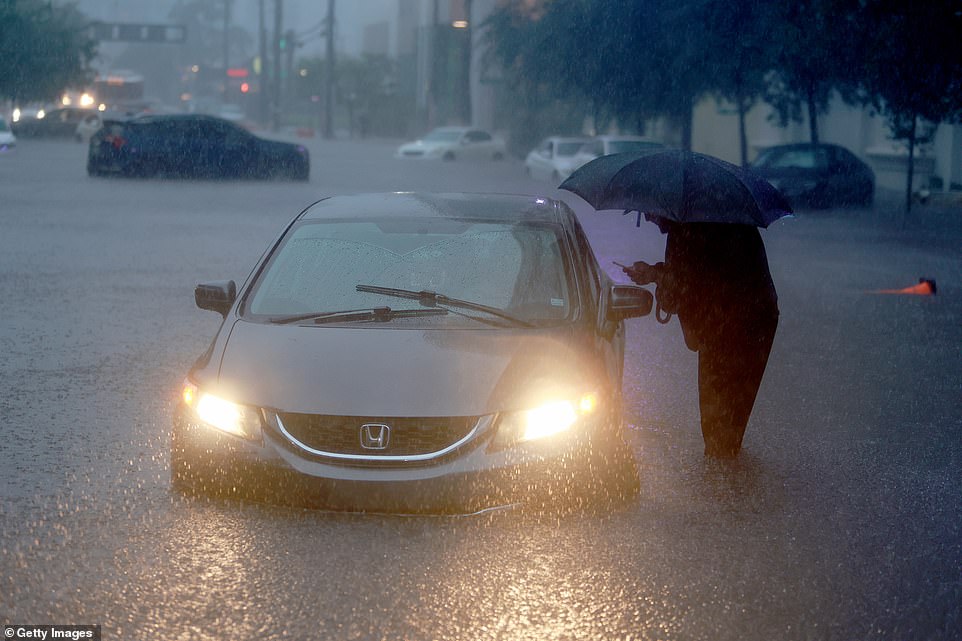 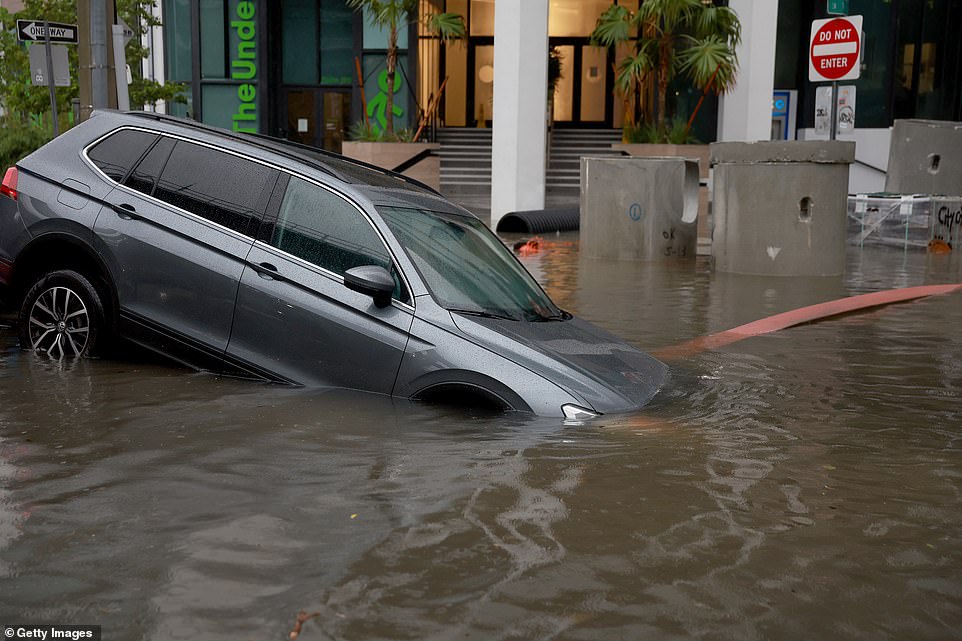 Pictured, a car that drifted into the streets due to the flooding and is now lying submerged as tow trucks arrived shortly 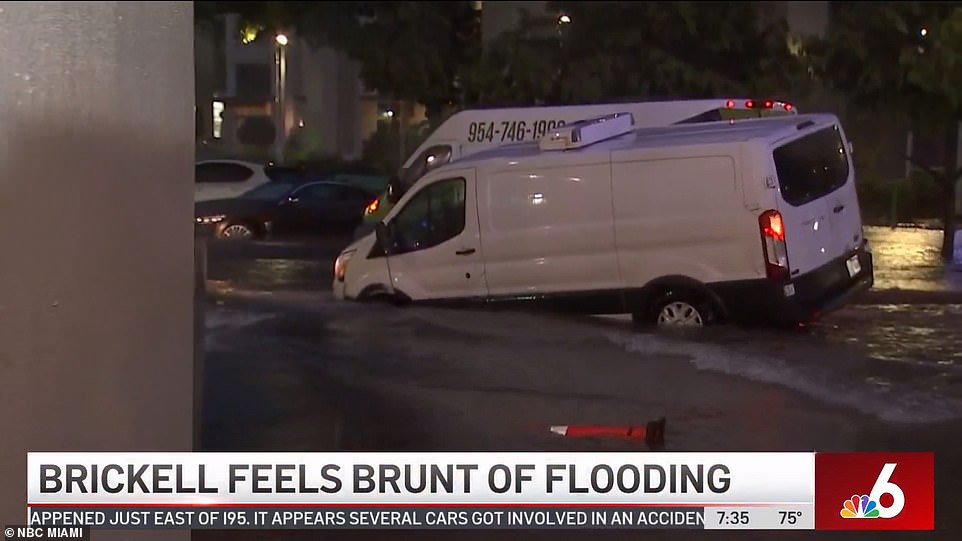 Even larger vehicles are being trapped by the aggressive rainfall, which will continue throughout the day 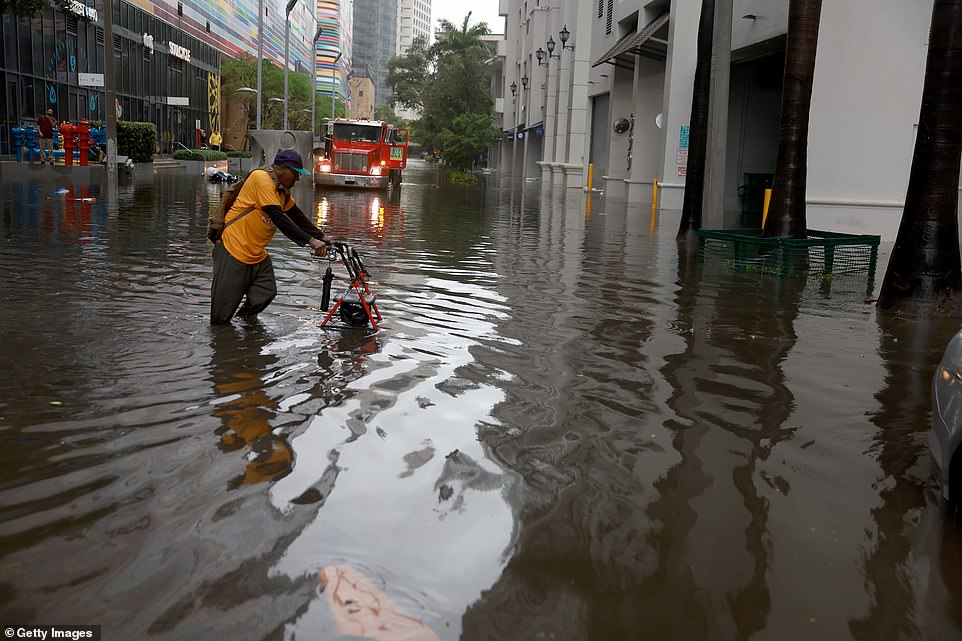 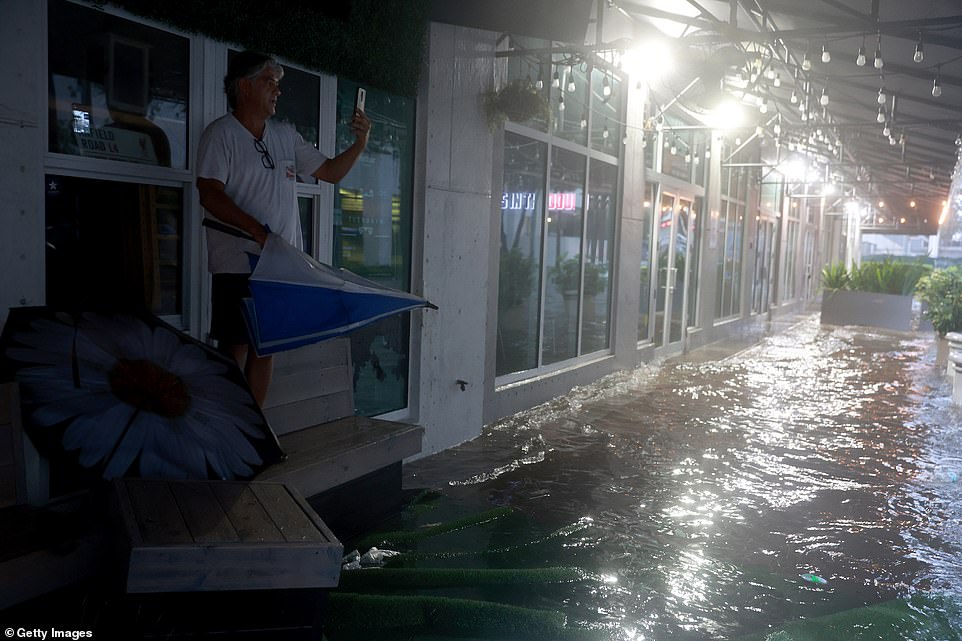 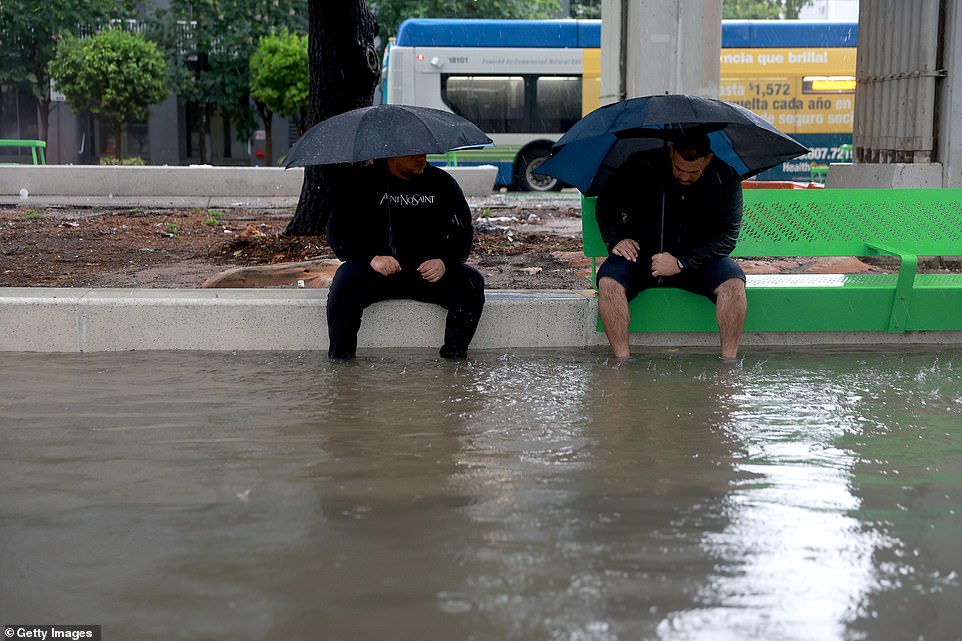 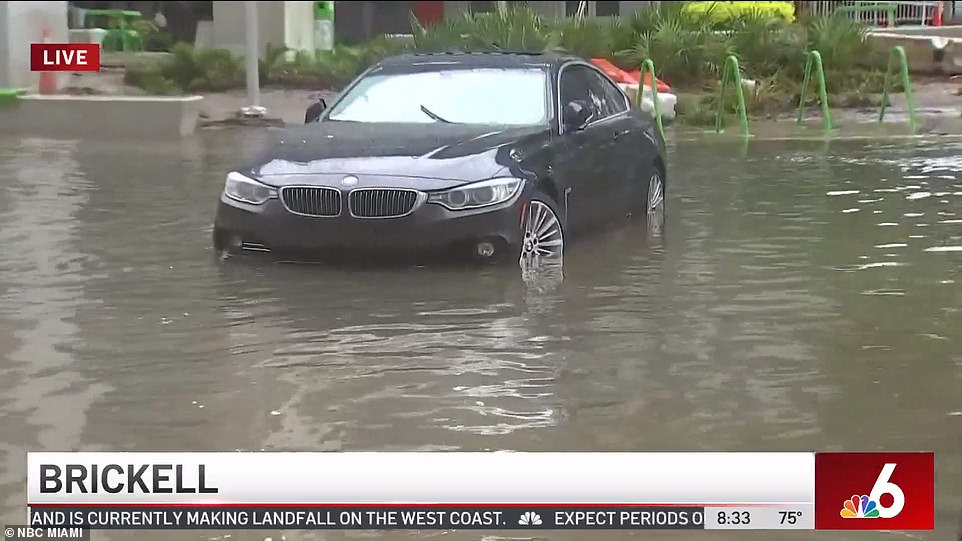 Naples Mayor Teresa Heitmann told Accuweather that crews were out before the storm trying to clear storm drains to prevent further flooding as the city bared the brunt of the rainfall early Saturday morning, experiencing nearly nine inches of rain.

The National Hurricane Center in Miami said the storm once known as Agatha in the Pacific Ocean, with wind gusts up to 55 mph, will be fully realized as Tropical Storm Alex once it reaches the Atlantic Ocean basin by the late afternoon. 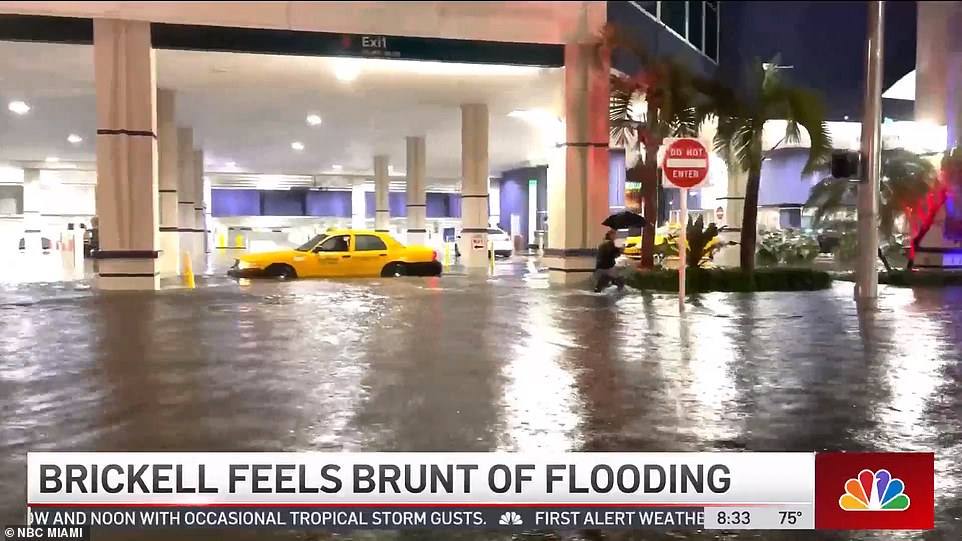 Flood warnings have been sent out for Kendall, Miami Beach, Key Biscayne, Fort Lauderdale, Hollywood, Coral Gables, Aventura and Miami Gardens and the rest of the Miami-Dade County 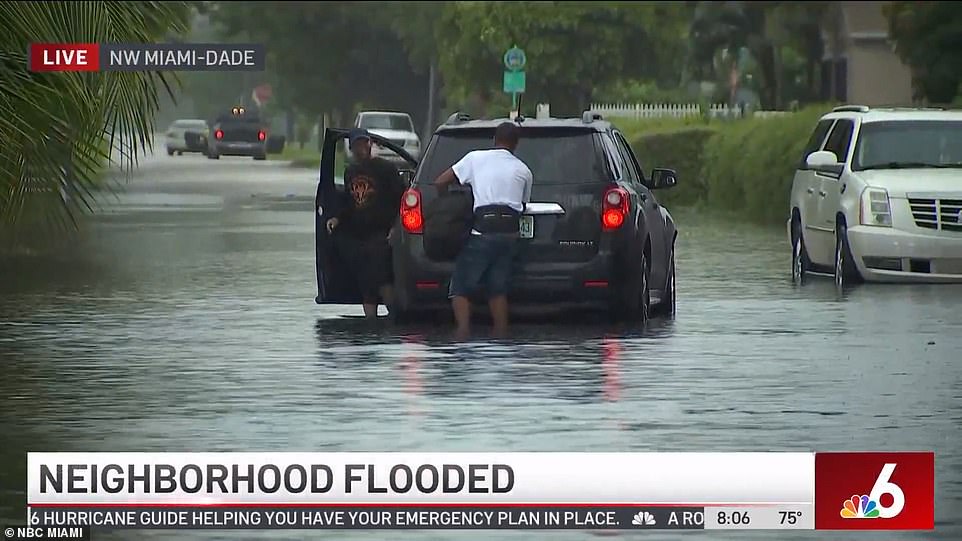 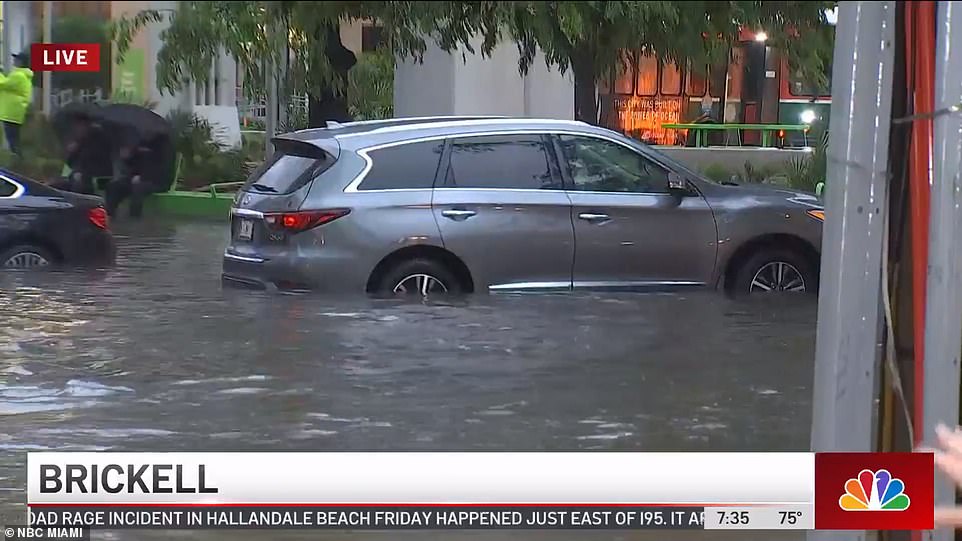 The rainfall in Miami is currently at more than 9 inches as of 10:30 a.m. as rainfall continues 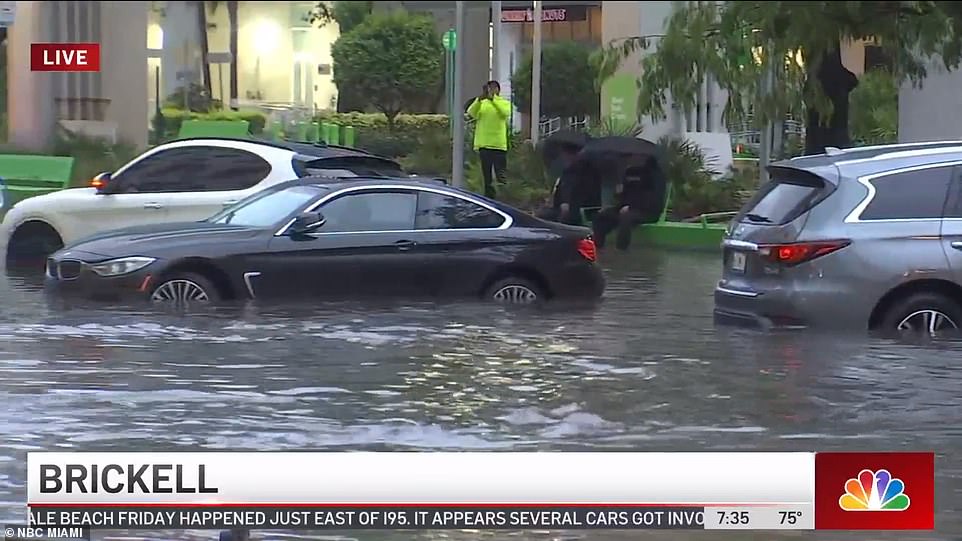 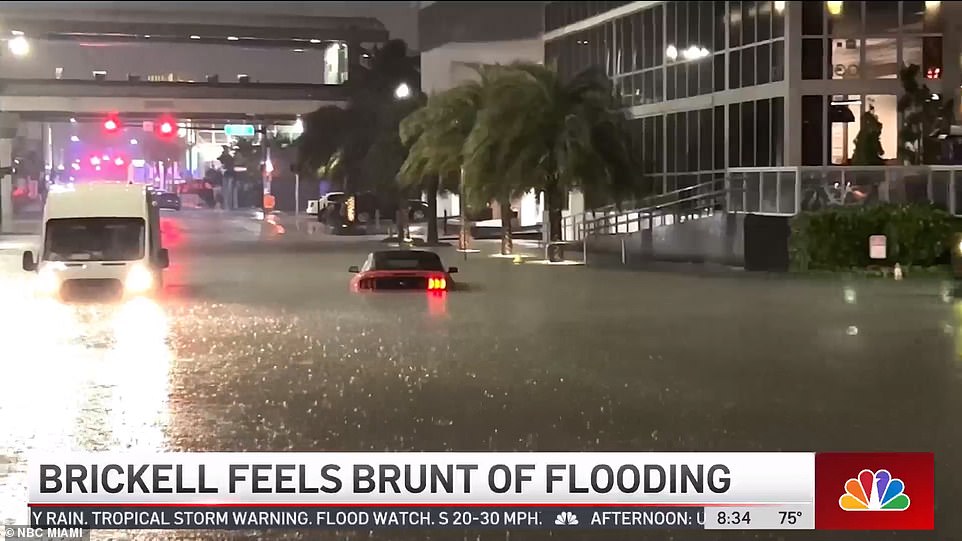 The rainfall began early in the morning as cars were already trapped and almost fully submerged before 9 a.m. 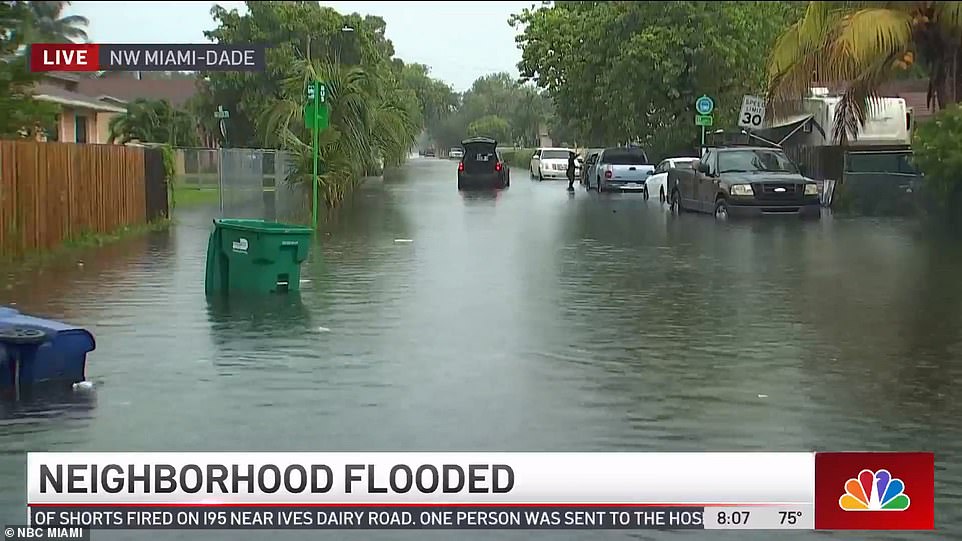 The damage in Miami comes after two people were confirmed dead in Cuba by authorities on Friday night, with officials saying one of the deceased fell into a rain-swollen river southwest of Havana.

About 50,000 power outages were reported in Cuba on Friday night as the country’s Civil Defense organization said its power grid and multiple homes were damaged by the cyclone.

The storm also caused members of the Carnival Cruise’s Mardi Gras ship to rescue 16 people from a small boat off Cuba on Friday.

‘Carnival crew members onboard Mardi Gras spotted a small vessel in distress and stopped to help before before 8 a.m. Friday morning as the ship headed toward Florida,’ company said in a statement.

The Atlantic hurricane season officially began Tuesday. This is an unusually early start to the storm season but not unprecedented for Florida. 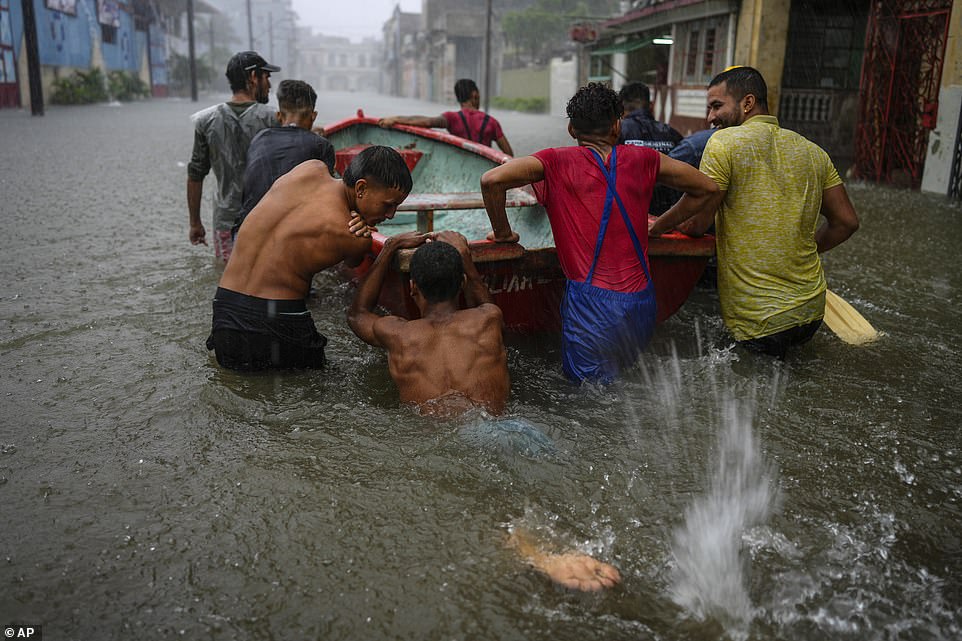 The cyclone left streets in Havana Cuba flooded, to the point where residents used boats to rescue each other 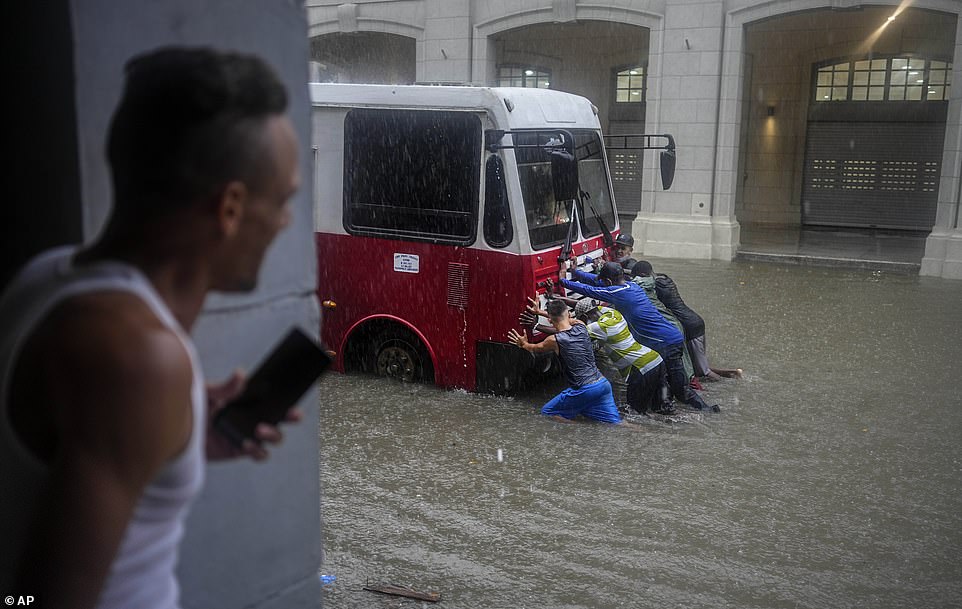 Pictured, Havana residents trying to push a bus and free it from the flooded roads 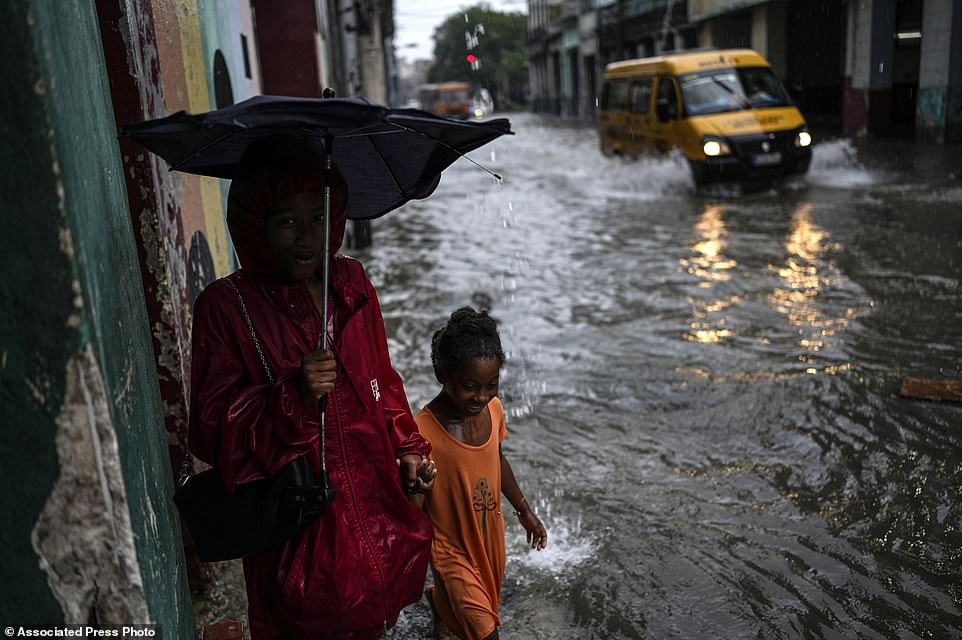 Children walk through their neighborhood street flooded by heavy rains, in Havana, Cuba, on Friday 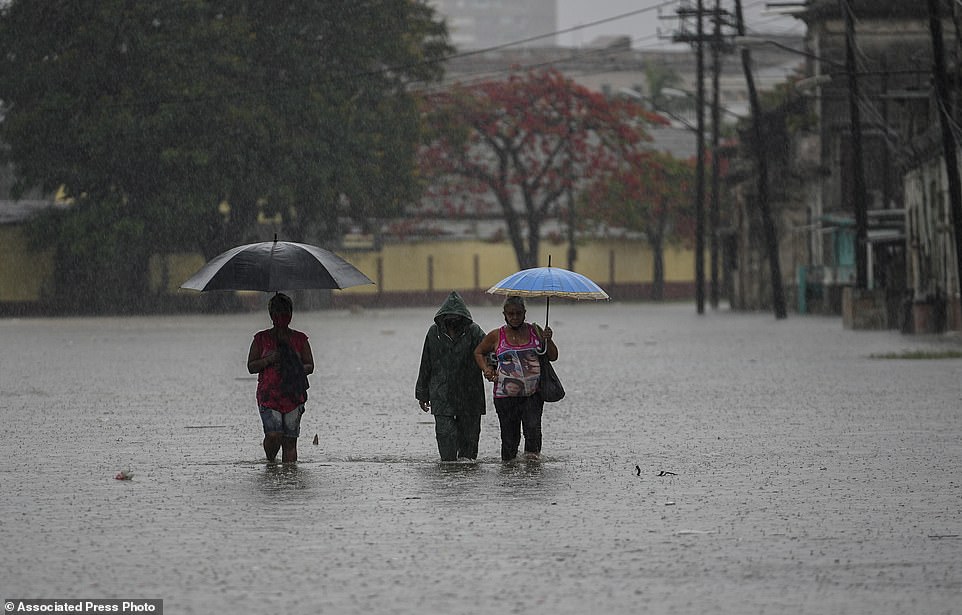 Havana residents wade through a street flooded by the storm, which was confirmed to have killed two in the country 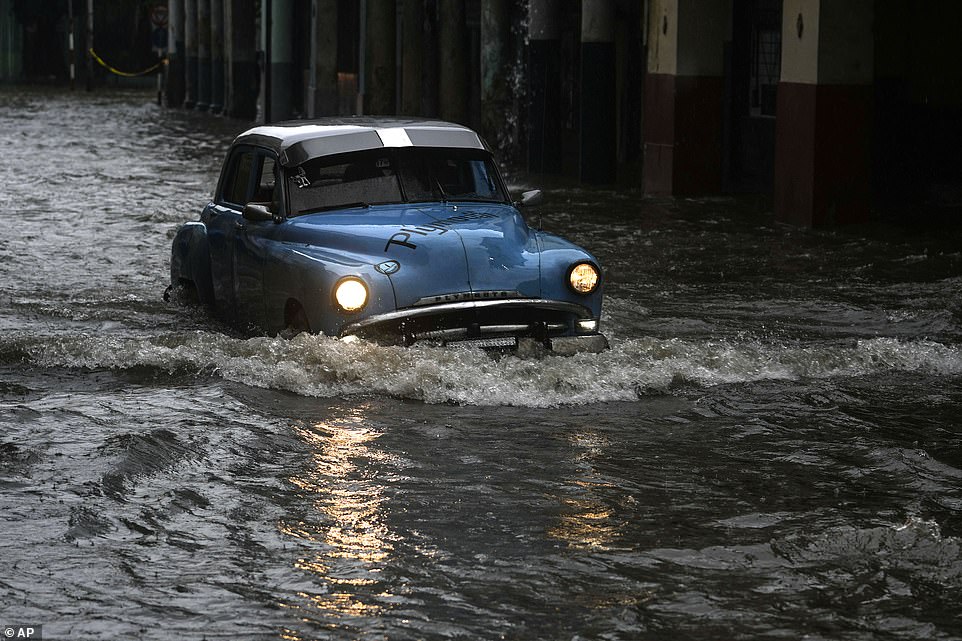