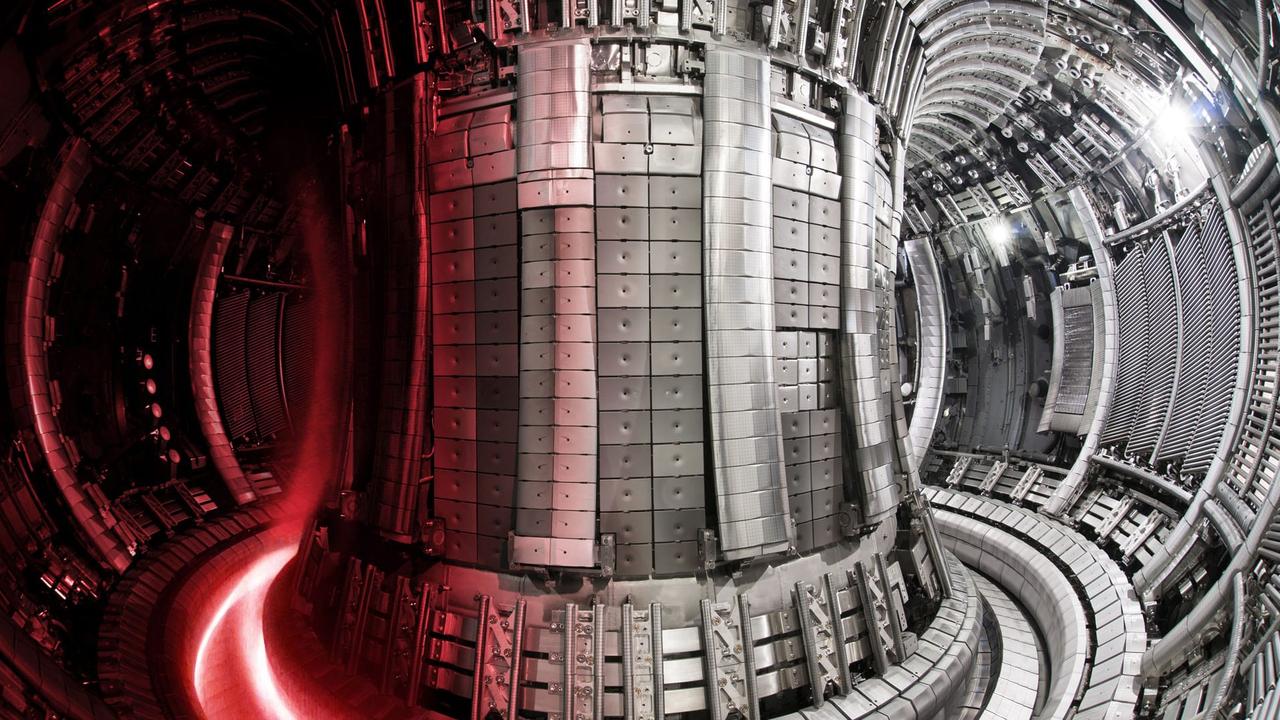 It was over in a flash but scientists have created the equivalent of a star, ten times hotter than the sun, leading to hopes of limitless, pollution free energy.

Scientists in Britain have created a “mini star” ten times hotter than the sun within a laboratory giving hope that potentially limitless supplies of low carbon energy will be possible.

But the solution to creating reliable and non-polluting electricity through the process of nuclear fusion could still be decades away.

And the experiment itself was a ‘blink and you’ll miss it’ phenomenon that lasted just seconds.

On Wednesday, a team at the Joint European Torus (JET) facility near Oxford in central England announced they had broken their own world record for producing energy.

Over five seconds in December, the experiment generated 59 megajoules of energy more than doubling a 1997 record, the UK Atomic Energy Authority (UKAEA) said.

That is about the power needed to power 35,000 homes for the same period of time, five seconds, said JET’s head of operations Joe Milne.

Put another way, it’s the amount of energy needed to boil 60 kettles.

While that’s still a small amount of power, the scientists have said it shows the reactor design is viable and can be scaled up.

“The JET experiments put us a step closer to fusion power,” Dr Miles told the BBC.

“We’ve demonstrated that we can create a mini star inside of our machine and hold it there for five seconds and get high performance, which really takes us into a new realm.”

The results “are the clearest demonstration worldwide of the potential for fusion energy to deliver safe and sustainable low-carbon energy”, the UKAEA said.

The doughnut-shaped machine used for the experiments is called a tokamak, and the JET site is the largest operational one in the world.

The JET process of nuclear fusion involves just 0.1 milligrammes each of deuterium and tritium. Both are isotopes of hydrogen, with deuterium also called heavy hydrogen, and are heated to temperatures ten times hotter than the centre of the sun to create plasma.

No material on earth can stand those kind of temperatures. To overcome this, the plasma is held in place using magnets as it spins around, fuses and releases tremendous energy as heat.

Fusion is inherently safe in that it cannot start a runaway process. Deuterium is freely available in seawater, while tritium can be harvested as a by-product of nuclear fission.

Gram for gram it releases nearly four million times more energy than burning coal, oil or gas, and the only waste product is helium.

The results announced on Wednesday demonstrated the ability to create fusion for five seconds, as longer than that would cause even the JET magnets to overheat.

A larger and more advanced version of JET is currently being built in southern France, called ITER, where the Oxford data will prove vital when the site comes online, possibly as soon as 2025.

ITER will be equipped with superconductor electromagnets which will allow the process to continue for longer, hopefully longer than 300 seconds.

About 350 scientists from EU countries plus Britain, Switzerland and Ukraine – and more from around the globe – participate in JET experiments each year.

JET will soon pass the fusion baton to ITER, which is around 80 per cent completed, said Dr Milnes.

“If that’s successful, as we now think it will be given the results we’ve had on JET, we can develop power plant designs in parallel … we’re probably halfway there” to viable fusion, he said.

But fusion won’t solve the world’s energy woes overnight. If all goes well at ITER, a prototype fusion power plant won’t be ready until 2050.

Such a plant would produce no greenhouse gases and only very limited and short lived radioactive waste.

But as many countries- including Australia – have a commitment to net zero emissions by 2050, they will have to achieve that without the aid of fusion technology.

International co-operation on fusion energy has historically been close because, unlike the nuclear fission used in atomic power plants, the technology cannot be weaponised.

The France-based megaproject also involves China, the EU, India, Japan, South Korea, Russia and the US.

Tim Luce, head of science and operation at ITER, said the project emerged in the 1980s from talks on nuclear disarmament between US president Ronald Reagan and Soviet leader Mikhail Gorbachev.

“And the one thing they did agree on was using fusion as a co-operation,” he told AFP.

“Somehow fusion has had the scientific panache to bring together disparate governmental entities and actually choose to work together on it.” Despite dozens of tokamaks being built since they were first invented in Soviet Russia in the 1950s, none has yet managed to produce more energy than is put in.

The latest results use about three times the amount of energy that is produced. Ian Fells, emeritus professor of energy conversion at the University of Newcastle, said Wednesday’s result was a “landmark in fusion research”.

“Now it is up to the engineers to translate this into carbon-free electricity and mitigate the problem of climate change,” added Prof Fells, who is not involved in the project.