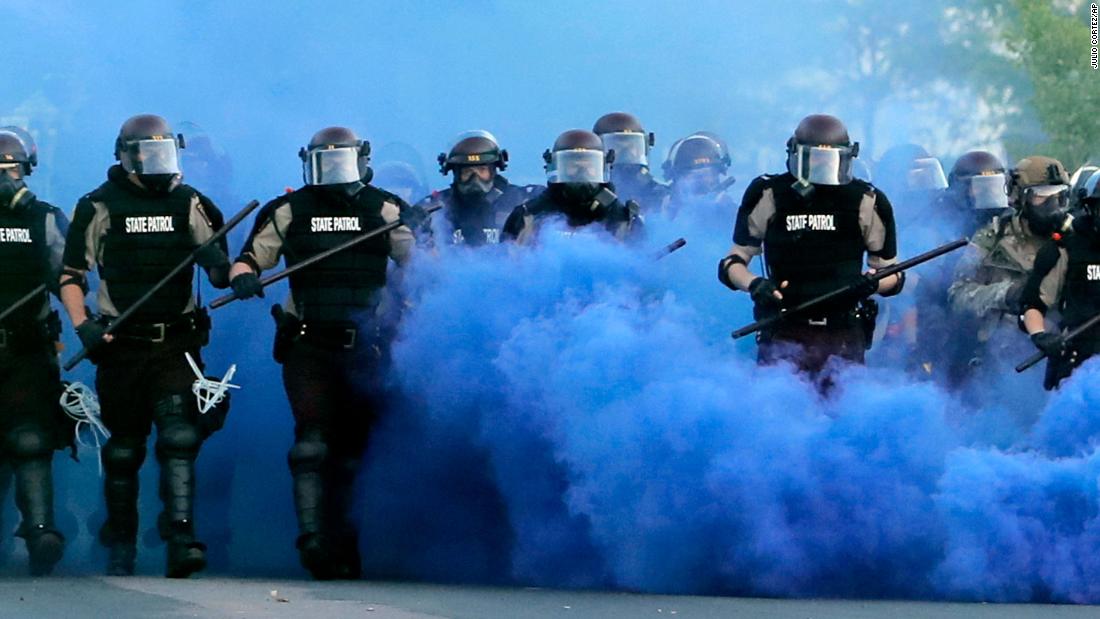 In addition, officials with the Minnesota Department of Public Safety (DPS) and Minnesota State Patrol (MSP) are not permitted to use chemical agents or to seize or intentionally damage journalists’ equipment, according to an order from US District Judge Wilhelmina Wright.

And journalists are not required to disperse even if police order protesters to do so during demonstrations, the order says.

The American Civil Liberties Union called the action groundbreaking and said it requires state law enforcement to be held accountable to the First Amendment.

“We need a free press to help us hold the police and government accountable. Without a free press, we don’t have a free society, and we can’t have justice,” Teresa Nelson, the legal director of the ACLU of Minnesota, said in a statement.

A payment of $825,000 to the ACLU was agreed to in the settlement, as well as additional training for state officers, the DPS and MSP said in a joint statement Tuesday.
The ACLU of Minnesota, which filed the lawsuit on behalf of several journalists, said the payment would go to media members who were “attacked and injured” by police covering the protests over the police killings of Floyd in 2020 and Wright last year.

Ed Ou, a freelance video journalist who was a plaintiff in the suit, was struck by a projectile and pepper sprayed, while covering the George Floyd protests.

“When authoritarian governments in other parts of the world see U.S. law enforcement targeting the press, it empowers them to act with impunity,” he said in the ACLU’s news release.

“This injunction sends a message that freedom of the press is an ideal the United States continues to hold as one of its core values … I am glad there is still some semblance of accountability to address attacks like this. I hope this case sets the precedent that any assault of a journalist is one too many.”

The settlement between journalists and state law enforcement comes amid a tense time again in the city of Minneapolis. On Tuesday night, hundreds of people marched to protest last week’s fatal shooting of Amir Locke, who was killed by police who were executing a no-knock warrant as part of a warrant as part of a homicide investigation into Locke’s cousin, who has since been arrested and charged with two counts of second-degree murder. The cousin was not at the apartment at the time of the raid.
Protestors could be heard chanting slogans calling for police accountability and shouting, “What’s his name? Amir Locke! Say his name. Amir Locke!”

Less than two years ago, chants of “Say his name. George Floyd!” rang throughout dozens of cities as demonstrators voiced outrage over the shocking manner of Floyd’s death.

MSP Chief Col. Matt Langer said the organization had learned from the incidents over the last two years. “That’s why we have already implemented several improvements, including the use of an ombudsman for media, a public information officer in the field, and the deployment of body-worn cameras,” he said in a statement.

“The ability of journalists to cover civil unrest in our communities must be protected and encouraged,” DPS Commissioner John Harrington said in the same statement. “The hallmarks of this agreement are transparency, accountability and excellence in policing. Our agency is committed to those principles as we work with members of the media to implement the terms of this agreement.”

Some journalists faced harsh crowd control measures from police during protests in and around Minneapolis, which included the arrests of CNN correspondent Omar Jimenez, producer Bill Kirkos and photojournalist Leonel Mendez while in the middle of a live television report on May 29, 2020.

Jimenez could be seen holding his CNN badge while reporting, identifying himself as a reporter, and telling the officers the crew would move wherever officers needed them to. An officer gripped his arm as Jimenez talked, then put him in handcuffs.

Police told the crew they were being detained because they were told to move and didn’t, one member of the CNN crew relayed to the network. The three were released from custody about an hour later.

CNN was not part of the lawsuit, which referenced the crew’s arrest as one of several examples of forceful acts by police.

The settlement prohibits certain specific behavior by law enforcement toward people believed to be journalists during protests.

Officials, according to the order, are prevented from “arresting, threatening to arrest, or using physical force — including through use of flash bang grenades, non-lethal projectiles, riot batons, or any other means — directed against any person whom they know or reasonably should know is a Journalist unless the State Defendants have probable cause to believe that such individual has committed a crime,” the order said.

The decision was based on “constitutional rights” and “serves the public interest,” the order says.

Officials with DPS and MSP are not permitted to use chemical agents, seize or intentionally damage journalists’ equipment, the order says, unless the journalist is posing in imminent threat of violence or harm to people or property.

Any official that is responding to a protest or civil unrest that is covered by a journalist should “prominently display their agency name and badge number readable from a distance of twenty feet;” the order said, and copies of the order should be provided within 48 hours to officials from either agency that is going to respond to civil unrest or protests covered by journalists.

The ACLU continues to move forward with its civil suit against the City of Minnesota, its police chief, and sheriff.