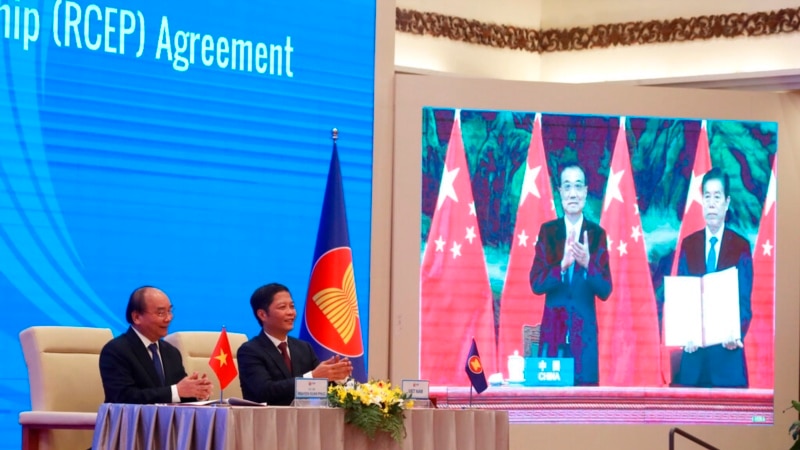 In Thailand, Prapaipan Manathanya has high hopes for what the trade deal will mean for her company. As the managing director of the Thai rice exporting company CM Premium Rice, she expects the trade pact to increase the “competitive advantage” of her exports because the key markets of China, Japan and South Korea will waive tariffs. Thailand is one of 15 countries that form RCEP.

“There will certainly be advantages, such as creating competitiveness opportunities for Thai products and allowing importers to obtain cheaper products from tax exemption, which may consequently allow them to gain more profits or sell products with cheaper prices,” she said.

RCEP includes countries in the 10-member Association of Southeast Asian Nations (ASEAN) as well as China, Japan, South Korea, Australia and New Zealand. The deal will cut tariffs on more than 90% of goods traded. That means exporters would save money on shipping goods to other countries, including the massive Chinese market. The economies of Indonesia and Vietnam, among others, rely heavily on exports.

“We have to look for technology to refine products to ensure that it has quality like neighboring countries,” Saron said. “We will try [to make products] to compete in the free-tariff framework.”

A study by the Asian Development Bank, a low-interest lender, says RCEP will increase world real income by $186 billion, all but $21 billion of that in Asia.

Japanese multinationals see China as both a market and manufacturing base.

And economic improvement will eventually touch countries outside the Asia Pacific, Chong said.

“Free trade is not quite in favor across much of the world, so RCEP may be just what the world needs, and (there) could be what you might call positive ancillary spinoffs when it comes to speeding up global economic recovery, because if (it) increases the volume of trade within its members it will also mean that people who are in manufacturing or even services will extend that demand into non-RCEP economies,” he said.

China calls the pact a tool to close wealth gaps in Asia, state-run media report, and to replace “protectionism” with a more globalized post-pandemic recovery.

“The RCEP will strongly offset the impact of raging protectionism and unilateralism, bringing free trade and multilateral cooperation back to the fore,” China’s official Xinhua News Agency said in a commentary on Jan. 1.

But not every country is onboard with RCEP. India was originally part of the trade negotiations but later backed out due to concerns about what lower-cost imports would do to its industries.

Diplomatically, the RCEP would especially improve attitudes toward China, where governments from Australia to Japan have been embroiled in political disputes for years or decades, experts say.

“I think relations should improve slowly in this region,” said Jayant Menon, a visiting senior fellow with the ISEAS–Yusof Ishak Institute’s Regional Economic Studies Program in Singapore. “Especially as we work our way through this pandemic and people focus on getting back to growth again, then the role that China can play becomes more significant.”

The 15 members are unlikely to “drag people to court” over any disputes, Menon said, as it’s “not really the Asian way.” Their signatures to the deal do not obligate one another to follow labor or environmental rules to the degree other trade pacts do, he added.

The presence of many countries under one agreement stands to reduce the influence that China as the world’s No. 2 economy has in its two-way deals with inevitably smaller countries that are keen to ship goods to such a large market, said Alexander Vuving, professor at the Daniel K. Inouye Asia-Pacific Center for Security Studies, in Hawaii.

“It opens up the opportunity for the other members in RCEP to create this sort of peer pressure, and the weight of the majority in the multilateral setting, theoretically, puts China in a less advantaged position than previously (when) China was able to deal bilaterally with each of the countries in the region,” Vuving said.

Member countries signed the Asia-wide agreement in 2020, bringing together a $26.2 trillion GDP, about 30% of the world’s total.

China spars with Japan over World War II history and sovereignty over a chain of islets. China has pared back imports from RCEP member Australia since Canberra called for an inquiry into Beijing as the source of COVID-19. Four Southeast Asian countries, all members of the trade partnership, vie with Beijing over claims to the South China Sea.

Chinese officials handled many of their disputes last year, with few compromises, through a mix of diplomatic and military means.

China and its rivals will find through the trade pact a “common frequency” to explore other “pragmatic” ways of cooperation, Chong said.

London Crime: Weekend of bloodshed in the capital after a fatal shooting, 2 stabbings, and a hammer attack in London

Will the Conservatives hold on to traditionally-safe North Shropshire seat?

Sajid Javid ‘should not put inequalities on the back burner’

Universities to get good job targets for poor students