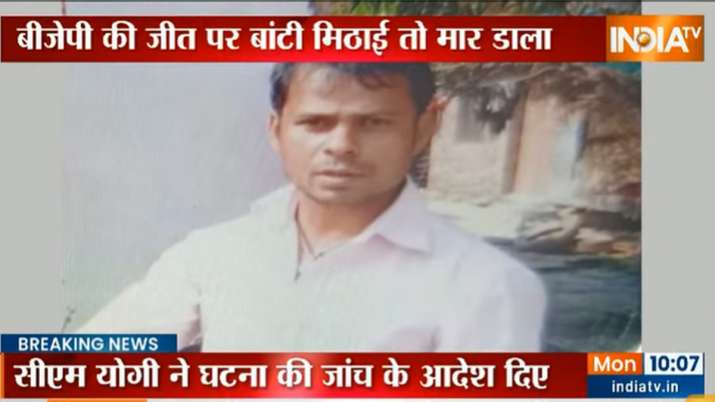 UP Kushinagar News: Uttar Pradesh Chief Minister Yogi Adityanath has directed the police to take strict action against those involved in the killing of a Muslim man in the Kushinagar district. The deceased man, identified as Babar, was allegedly lynched by his neighbours for supporting the Bharatiya Janata Party (BJP) and distributing sweets after the party’s poll victory in the state.

The CM while expressing grief, said that the culprits will be punished, adding that the government would provide all possible help to the bereaved family.

According to police, two accused have been arrested so far and a massive manhunt is underway to nab the remaining absconding perpetrators.

Danish Ansari, the sole Muslim Minister in the Yogi Adityanath government, told India TV that the Yogi government is with the family of Babar and promised that those involved in the crime will face the heat. He also said that the government would soon announce a relief package for the family.

“Yogi ji is with the family, they are not alone. Strict action will be taken against the accused.. criminals will rethink committing such crimes. Zero-tolerance against crime in Uttar Pradesh… this is Yogi’s Uttar Pradesh… only peace will prevail,” he said.

According to the killed man’s family, he was returning from his shop on March 20 when he chanted ‘Jai Shri Ram’ and was attacked by some local people. To save his life, Babar climbed on his roof, but the accused reached there and pushed him off the roof. He was admitted to Ramkola CHC from where he was referred to the district hospital and then to Lucknow. Babar died during treatment in Lucknow.

Family members said that the local people from their community had warned Babar against campaigning for the BJP and celebrating its victory. Babar had earlier sought protection from Ramkola police but his request went unheard.