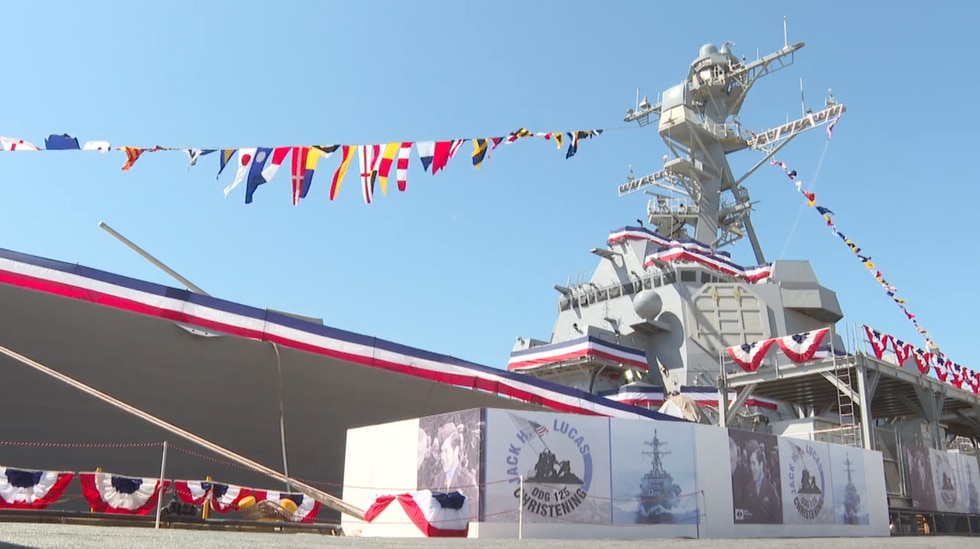 PASCAGOULA, Miss. (WLOX) – A christening at Ingalls Shipbuilding Saturday morning brought with it celebration and history of a Mississippi World War II veteran.

The state-of-the-art DDG 125 is named after the late Jack H. Lucas, a longtime resident of Hattiesburg. Lucas was the youngest Marine and youngest service member in World War II awarded the Medal of Honor. During a close firefight with Japanese soldiers, Lucas saved the lives of three Marines when he unhesitatingly placed himself on two grenades.

“Jack H. Lucas made a selfless decision to choose others and country over self,” Ingalls Shipbuilding President Kari Wilkinson said. “Our Ingalls shipbuilders have a deep appreciation and respect for what sailors and Marines do on behalf of our nation. We are proud to support them and to provide them this remarkable ship, our first Flight III destroyer.”

Speaking through her tears, Ruby Lucas said she’s filled with emotion knowing that others are acknowledging her husband’s legacy.

”This ship would have his spirit on it forever. He always loved his Marines. He would go fight for his country up to the day he died if he was able to. I’m so proud of this ship; it brings tears to my eyes,” Lucas said.

“May the Jack H. Lucas be indestructible, just like he was,” Ruby Lucas said. “This first of its kind ship is advanced in integrity, courage and commitment to serve our great country. Jack never ran from a fight, and I’m certain that all aboard his namesake will represent Jack with honor. Just as I feel his spirit with me, be assured that he will be with all of you all the time.”

Ingalls Shipbuilding President Kari Wilkinson said the ship has new technology that allows it to fight opponents on land, air, or sea.

“It does bring additional capability to the Navy and the nation, so we’re really proud to be building this ship,” Wilkinson said.

Chief of Naval Operations Adm. Michael Gilday said between the ship’s revamped radar and spy system, it sets the standard.

“If the United States Navy is the pacing threat in the world, I consider this shipyard to be pacing the quality of the ships they produce. Huntington Ingalls Industries Shipbuilding, I consider them world-class with respect of shipbuilding. The team that builds these ships are like gold-medal Olympic athletes,” Gilday said.

Arleigh Burke-class destroyers are highly capable, multi-mission ships and can conduct a variety of operations, from peacetime presence and crisis management to sea control and power projection, all in support of the United States military strategy.

You can watch the event in full on Huntington Ingalls’ Facebook page.