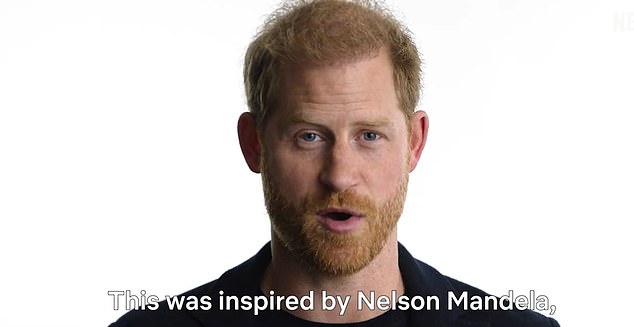 Nelson Mandela’s granddaughter today tore into Harry and Meghan, accusing them of ‘stealing’ the statesman’s words and using his name to ‘make millions’.

Ndileka Mandela, 57, has slammed the Sussexes over their Netflix documentary Live To Lead, where the couple use footage of the anti-apartheid campaigner leaving prison in 1990.

Harry says in the trailer for their latest film, part of their $100million (£83million) deal with the streaming giant: ‘This was inspired by Nelson Mandela’.

Ndileka has said she is angry that the couple appear to compare their own battles in the Royal Family with her grandfather’s long walk to freedom, calling it ‘upsetting and tedious’.

She said: ‘That’s chalk and cheese, there is no comparison. I know the Nelson Mandela Foundation has supported the initiative but people have stolen grandfather’s quotes for years and have used his legacy because they know his name sells – Harry and Meghan are no different from them.’

Harry says in the trailer for their latest film, part of their $100million (£83million) deal with the streaming giant: ‘This was inspired by Nelson Mandela’ 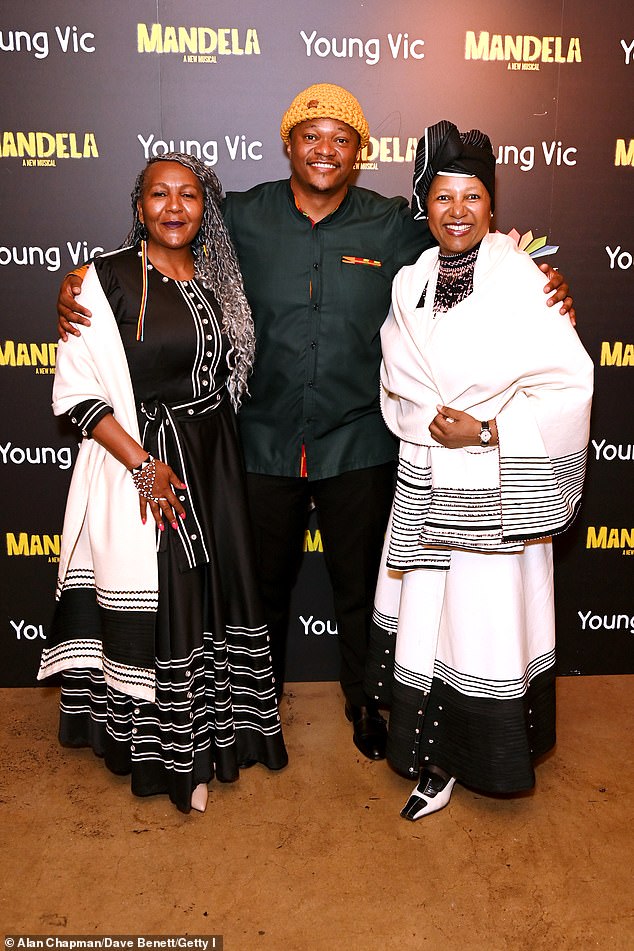 Ndileka Mandela (left), pictured with Luvuyo Madasa and her sister Nandi Mandela in London last month, has hammered the Sussexes for their use of the Mandela name

The Duke and Duchess of Sussex meet Graca Machel, widow of the late Nelson Mandela, on the last day of their tour in Africa in 2019

She added in an interview with The Australian newspaper: ‘I admire Harry for having the confidence to break away from an institution as iconic as the Royal Family. Grandad rebelled against an arranged marriage to find his own path in life.

‘But it comes at a price, you have to then fund your own life, I’ve made peace with people using granddad’s name but it’s still deeply upsetting and tedious every time it happens.’

In the trailer for Live To Lead, co-produced by the Nelson Mandela Foundation, Harry quotes the activist and says: ‘What counts in life is not the mere fact that we’ve lived’.

Meghan then appears on screen and finishes the quote: ‘It is what difference we have made to the lives of others that will determine the significance of the life we lead’.

The couple were both executive producers, according to the credits, and introduce each of the episodes, talking over the opening credits.

And with Harry’s book Spare out next week, Ndileka warned: ‘Harry needs to be authentic and stick to his own story, what relevance does grandad’s life have with his?

‘I don’t believe he nor Meghan have ever properly met granddad, maybe when Harry was young at Buckingham Palace, but they are using his quotations in the documentary to draw in people and make millions without the Mandela family benefiting’.

MailOnline has asked a spokesman for the Sussexes to comment.

It is not the couple’s first run in with the Mandelas. Questions were raised in August over the Duchess of Sussex’s suggestion that her wedding to Prince Harry prompted jubilant celebrations in South Africa.

Meghan, 41, told a US magazine that a South African actor had told her his country had ‘rejoiced in the streets the same we did when [Nelson] Mandela was freed from prison’.

The interview with Meghan prompted anger in South Africa, where Mr Mandela’s grandson said his release from prison should not be compared to a royal wedding. 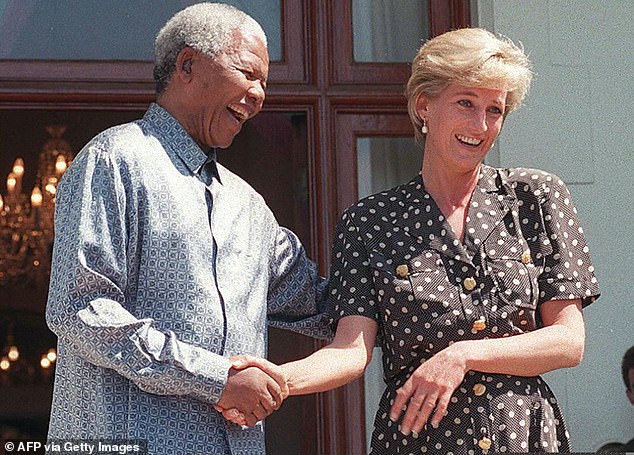 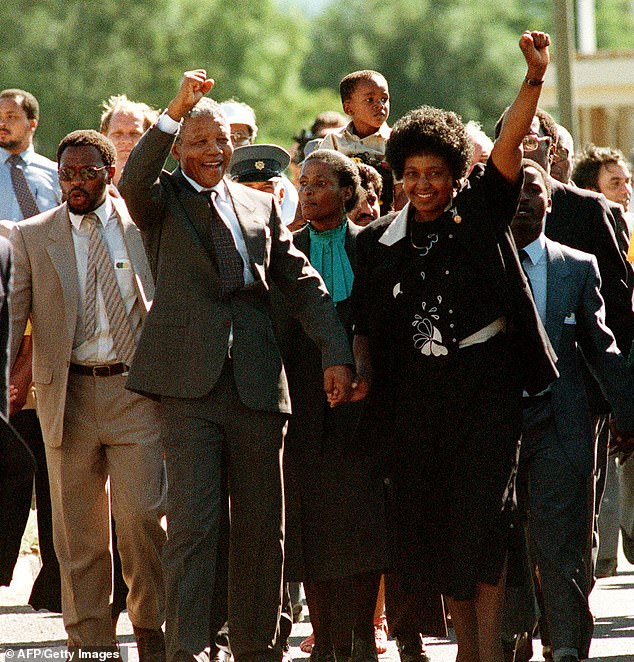 She [Meghan] recalls a moment from the 2019 London premiere of the live-action version of The Lion King. ‘I just had Archie. It was such a cruel chapter. I was scared to go out.’ A cast member from South Africa pulled her aside. ‘He looked at me, and he’s just like light. He said, “I just need you to know: When you married into this family, we rejoiced in the streets the same we did when Mandela was freed from prison.” ‘

Zwelivelile Mandela said: ‘Madiba’s (Mandela’s) celebration was based on overcoming 350 years of colonialism with 60 years of a brutal apartheid regime in South Africa. So it cannot be equated to as the same.’

The hashtag VoetsekMeghan trended on social media. Voetsek is an offensive Afrikaans word meaning ‘go away’ or ‘get lost’.

Meghan insisted the encounter took place as she attended the London premiere of the live-action version of The Lion King in 2019.

But an actor who says he was the only South African cast member in the film told MailOnline he was ‘baffled’ because he has never met the duchess.

Dr John Kani said Meghan’s wedding to Prince Harry was ‘no big deal’ in South Africa and could not be compared to the landmark release of the anti-apartheid campaigner after 27 years in prison.

The former Royal Shakespeare Company actor told MailOnline: ‘That was a world event. Surely Miss Meghan or whatever marrying into royalty cannot in any way be spoken in the same breath or even the same sentence as that moment.’

The duchess faced an international backlash over her interview with The Cut magazine in New York, in which she said she and Prince Harry were treated differently from other senior royals and felt forced out of Britain. She told the interviewer she had been pulled aside by a South African cast member at the 2019 London premiere of the live-action version of The Lion King, a year after her lavish royal wedding.

Meghan said the unnamed male actor told her: ‘I just need you to know. When you married into this family, we rejoiced in the streets the same we did when Mandela was freed from prison.’ 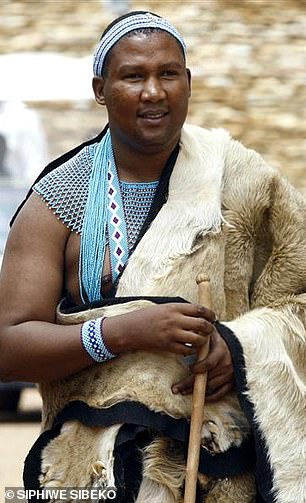 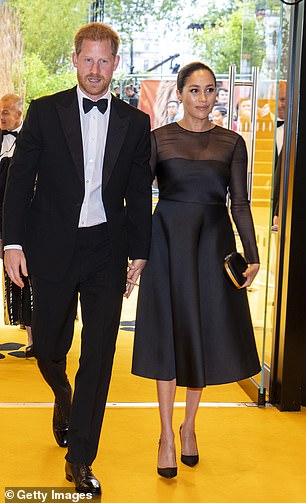 The Duke and Duchess of Sussex at the premiere of The Lion King at the Odeon Leicester Square in London on July 14, 2019

Dr Kani, 79, said he was he was the only South African cast member in the film, and did not attend the London premiere.

He said the only other South African who was involved was Lebo M, a composer who was not in the cast.

He said: ‘I have never met Meghan Markle. This seems like something of a faux pas by her.

‘I am the only South African member of the cast and I did not attend the premiere in London… It just may be a mis-remembering on her side.’

Dr Kani, who voiced the monkey shaman Rafiki in the film, said he was in Hollywood when the film opened in the US and then had to travel immediately to France as he was shooting another movie in Paris, so was unable to attend the London premiere. The actor, a friend of Mr Mandela, said the moment the anti-apartheid campaigner walked free from prison could not be compared to a royal wedding.

‘You can’t really say where you were when Meghan married Harry. I am confused about this. She is an important person in her own life.

‘I cannot even tell you now what month she married or what year.’

Dr Kani said he had been ‘truly surprised’ by Meghan’s account of her encounter with a South African actor at the London premiere.

He told MailOnline: ‘It is baffling me. I am the only South African in the cast. I play Rafiki, Seth Rogen plays Pumbaa, Donald Glover plays Simba and Beyonce plays Nala.’

He added: ‘I am truly surprised by this. For me it is a non-event, the whole thing.’