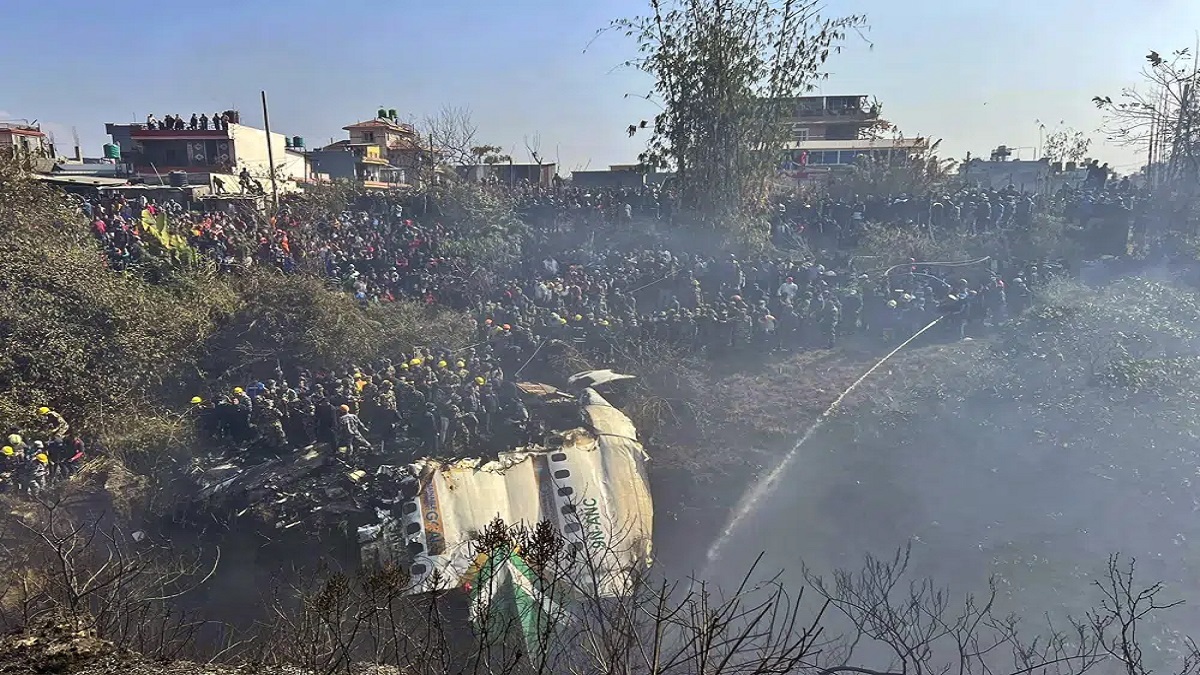 Nepal plane crash: Nepal’s Civil Aviation Authority on Sunday (January 15) said that 68 passengers on board the ATR-72 Yeti Airlines flight, which crashed somewhere between the old airport of Pokhara region and the Pokhara International Airport, were confirmed dead.

The Nepalese passenger plane, which crashed into a river gorge with 72 people onboard, was an ATR-72 aircraft, in the first instance that such a model met with an accident in Nepal’s chequered aviation history.

The ill-fated Yeti Airlines’ 9N-ANC ATR-72 aircraft took off from Kathmandu’s Tribhuvan International Airport at around 10:33 am for the 25-minute journey and crashed on the bank of the Seti River between the old airport and the new airport in Pokhara, minutes before landing, according to the Civil Aviation Authority of Nepal.

A total of 68 passengers, including five Indians, and four crew members were on board the aircraft.

The number “72” in its name is derived from the aircraft’s typical standard seating capacity of 72 passengers. Currently, only Buddha Airlines and Yeti Airlines employ ATR-72 aircraft in Nepal.

Jagannath Niraula, spokesman for the Civil Aviation Authority of Nepal said this was the first accident of an ATR-72 aircraft in Nepal, according to MyRepublica newspaper. Sunday’s incident was Nepal’s deadliest plane crash in more than 30 years, according to data from the Aviation Safety Network.

Flight tracking website FlightRadar24 claimed that the Yeti Airlines aircraft was 15 years old and equipped with an ‘old transponder with unreliable data’. There is no information about any survivor so far, said Sudarshan Bartaula, spokesperson at Yeti Airlines.

Nepal has had a fraught record of aviation accidents, partly due to its sudden weather changes and airstrips located in hard-to-access rocky terrains.

The Nepal government has declared a national holiday tomorrow to mourn the deaths of the people on board the Yeti plane crash today. Nepal President Bidhya Devi Bhandari took to her Twitter handle to offer condolences to the passengers and crew members who lost their lives. She also expressed condolences to the bereaved families.

KNOW about ‘Indian citizens’ who lost their lives:

Of the five Indians who were feared dead in the plane crash in Nepal, four were planning to participate in paragliding in the popular tourist hub of Pokhara, a local resident said.

The five Indians were identified as-

Among the five Indian nationals, four had just arrived in Kathmandu from India on Friday.

“All the four were planning to enjoy paragliding in the lake city and tourist hub Pokhara,” recalled Ajay Kumar Shah, a resident of Sarlahi district in southern Nepal. “We came together from India in the same vehicle, he said.

“They stayed in Gaushala near Pashupatinath Temple and then in Hotel Discovery Inn in Thamel, before departing to Pokhara,” he said. They were planning to return to India from Pokhara via Gorakhpur, he added.

There is no information about any survivor so far, said Sudarshan Bartaula, spokesperson at Yeti Airlines. Among the five Indian nationals who died, four hailed from Uttar Pradesh Ghazipur’s district, District Magistrate, Ghazipur, Aryaka Akhauri told media over a phone call.

“The families have been contacted. Our Sub Divisional Magistrate and other officials are meeting them,” she said. “We are also in touch with the embassy. The rescue operation is going on there. It has stopped now at night. It will resume tomorrow. We will do needful after the recovery of the bodies,” she added.

The rescue and search operation was halted on Sunday and will resume on Monday (January 16) to find the remaining bodies trapped in a deep river gorge surrounded by steep cliffs.

Nepal’s Prime Minister Pushpa Kamal Dahal ‘Prachanda’ has expressed grief over the air crash and has ordered an inquiry into the incident.

Meanwhile, Prime Minister Narendra Modi said he was pained by the tragic air crash in Nepal in which precious lives have been lost, including Indian nationals.

“Pained by the tragic air crash in Nepal in which precious lives have been lost, including Indian nationals. In this hour of grief, my thoughts and prayers are with the bereaved families,” Modi said in a tweet and tagged Nepalese Prime Minister ‘Prachanda’.

Civil aviation minister Jyotiraditya Scindia condoled the loss of lives in the plane crash in Nepal and termed it “extremely unfortunate”.

4 of 5 Indians killed in plane crash hailed from Ghazipur:

Four of the five Indians killed in a plane crash in Nepal hailed from Ghazipur district in Uttar Pradesh, officials said. Ghazipur District Magistrate Aryaka Akhauri told media over phone that the administration has reach out to the affected families.

“Our sub-divisional magistrate and other officials are meeting them. We are also in touch with the embassy and will do the needful after the recovery of bodies,” she said.

The four victims from Ghazipur district were identified as Sonu Jaiswal, Anil Rajbhar, Abhishek Kushwaha and Vishal Sharma. Sharma belonged to Alawalpur Chatti village in the Badesar area of the district, Jaiswal had houses in Chak Jainab and Alawalpur Chatti but was currently living in Sarnath, a police spokesperson said. Rajbhar was a resident of Chak Jainab in the Badesar area and Kushwaha of Dharwa in the Nonhara area of Ghazipur, he said.

Uttar Pradesh Chief Minister Yogi Adityanath on Sunday expressed condolences over the tragic aircraft crash in Nepal in which 68 people died including five Indians. Taking to Twitter, the Chief Minister said that instructions have been given to officials to coordinate with the Ministry of External Affairs (MEA) to make arrangements to bring the mortal remains of the deceased people of Uttar Pradesh to the state.

“The plane crash in Nepal is very sad. A humble tribute to all the people who died in this, including the Indian citizens! My condolences are with the bereaved families. May Lord Shri Ram give place to the departed souls in his holy feet and speedy recovery to the injured,” CM Yogi tweeted.”Officials have been instructed to coordinate with the Ministry of External Affairs to make arrangements to bring the mortal remains of the deceased people of Uttar Pradesh to the state,” he added.

What EXPERTS have to say on plane crash:

Mishandling, malfunctioning of aircraft system or pilot fatigue could be among the factors that caused the deadly plane crash in Nepal that killed at least 68 people on Sunday, according to pilots and an aircraft accident investigation expert. They also said the exact reasons that led to the accident will be known only after a detailed investigation.

Nepal, which has witnessed quite a few aircraft accidents in recent years, witnessed the crash of an ATR-72 aircraft, operated by Yeti Airlines, that was flying from Kathmandu to Pokhara. Going by the video clips on social media purportedly showing the plane’s trajectory seconds before it crashed, it was a clear sky and the weather was not bad.

An aircraft accident investigator told PTI that going by one of the video clips, the nose of the aircraft slightly went up and the wings drooped to the left side before the crash happened, and there could have been a stall. While the exact factors for the crash will be known only after completion of the detailed probe, initially, it looks like the possibility of mishandling by the pilot or malfunctioning of the plane’s angle of attack system, he said on the condition of anonymity. 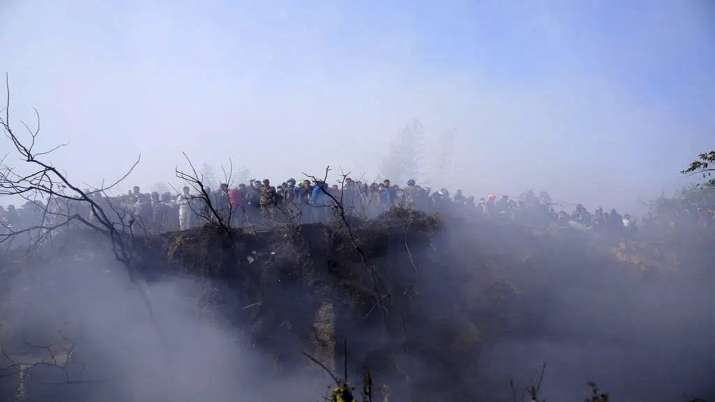 The person, who was involved in multiple aircraft accident probes, was also closely associated with the investigation into the Calicut plane crash in 2020. A senior pilot at a leading Indian carrier, who did not wish to be quoted, said that following procedures is paramount when flying to terrains like that in Nepal.

The pilot, who also flies to Nepal, said multiple factors, including pilot fatigue, could have led to the crash. While flying an aircraft, there is decision-making at every step and a pilot needs to have good rest. So, there could have been pilot fatigue and also the possibility of procedures not being followed, the pilot added.

A pilot with a regional carrier, who has been flying ATR planes for nearly two decades, opined that the particular aircraft could have suffered a stall or there could have been a pilot error. The factors that led to the crash will be clear only after the completion of the investigation, the pilot added.

“The aircraft involved is a 15-year-old ATR 72-500 with registration number 9N-ANC and serial number 754. This aircraft was equipped with an old transponder with unreliable data. We are downloading high-resolution data and verifying the data quality,” flight tracking website Flightradar24 said in a tweet.