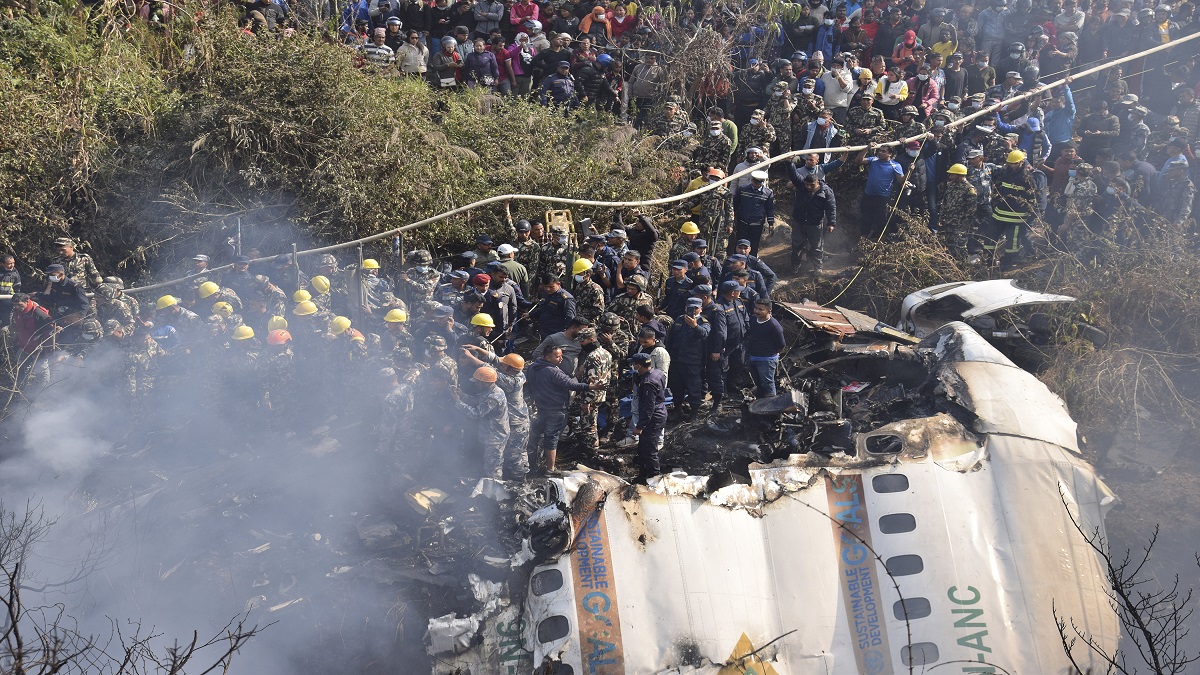 Nepal Plane Crash: The four passengers on the ill-fated Yeti Airlines plane that crashed in Pokhara in Nepal on Sunday were live on Facebook to share their experience on the flight, minutes before the aircraft went down. All the four passengers were from Ghazipur in Uttar Pradesh.

In the 1.3 minute live video on Facebook, one of them can be seen excitedly shouting “Mauj Kar Di” (it’s been fun) as the camera focuses on Pokhara town below.

The phone camera also pans on one of them, Sonu Jaiswal (29). After 58 seconds, however, the video shows aircraft taking a sharp turn towards the left and then crashing and turning into flames. As the phone camera continued to roll, it caught glimpses of towering flames around it for the next 30 seconds.

These four passengers from Baresar in Ghazipur were among of five Indians who died along with 68 other passengers in the crash.

Sonu Jaiswal, 29, Anil Rajbhar ,28, Vishal Sharma , 23, Abhishek Singh Kushwaha ,23, had landed in Kathmandu on January 13 and after performing puja at the Pashupatinath temple, they were heading for Pokhara for paragliding.

On Sunday, a pall of gloom descended on villages in Baresar and Nonahara area of Ghazipur district the four belonged to.

Sonu Jaiswal was a liquor trader while Anil Rajbhar and Abhishek Kushwaha ran Jan Sewa centres at Zahoorabad and Alawalpur in Ghazipur. Vishal Sharma was a finance officer at a two-wheeler agency.

It was Sonu’s FB profile where the video was live, confirmed by his cousin Rajat Jaiswal.

“Sonu was on Facebook live after boarding the flight for Pokhara. The live-streaming showed that Sonu and his companions were in a happy mood but suddenly, flames appear before the streaming stopped,” he said.

They were informed by the Ghazipur district magistrate office about the death of four men from the district in Nepal plane crash.

SHO, Baresar, Devendra Pratap Singh, said that they confirmed the identity of the four and then he visited the house of Anil Rajbhar, and met his father Ramdharas.

“Ramdharas told us that the four — Anil, Abhishek, Vishal, and Sonu — had left for Nepal on January 13 and planned to stay for a week,” Singh said.

Circle officer, Kasimabad, Balram Singh, said that he along with the SDM visited the home of the four youths and assured their families of all cooperation in bringing back their bodies.

Abhishek’s elder brother Abhinay said, “In the past three hours, we have received calls from the Nepalese and Indian embassies. We have been informed that bodies will reach Delhi on Monday morning.”