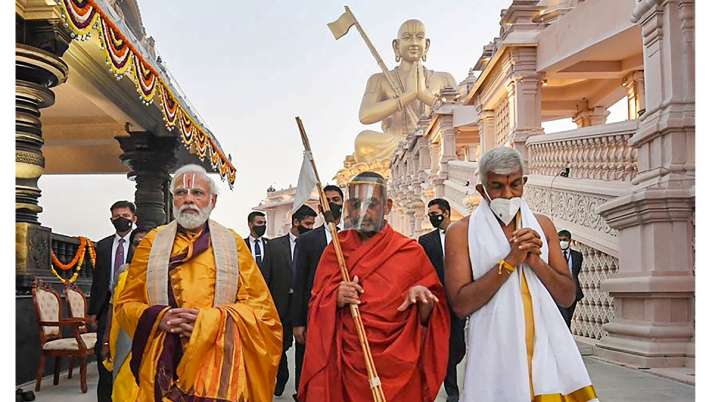 Congress leader Rahul Gandhi has used the ‘Statue of Equality’ as ammunition for his latest salvo against the Prime Minister and his ‘New India’ and ‘Atma Nirbhar’ slogans. The Prime Minister had on Saturday dedicated to the nation the 216 foot tall statue of Swami Ramanujacharya at Hyderabad.

Drawing attention to the giant statue manufactured in China and assembled in Hyderabad, Rahul tweeted, “Statue of Equality is Made in China. ‘New India’ is China-nirbhar?”

According to sources, a China-based company had been issued the contract in 2015 for manufacturing the five-metal alloy statue. After completion of the production phase in China, it shipped in 1600 components which were assembled over a year and a half at the venue on Hyderabad outskirts.

The giant statue of the medieval saint and social reformer has been inaugurated as part of the 1000th birth anniversary celebrations of Ramanujacharya, by Hindu seer Chinna Jeeyar Swami.

The statue is considered as the world’s second-largest statue in sitting position.