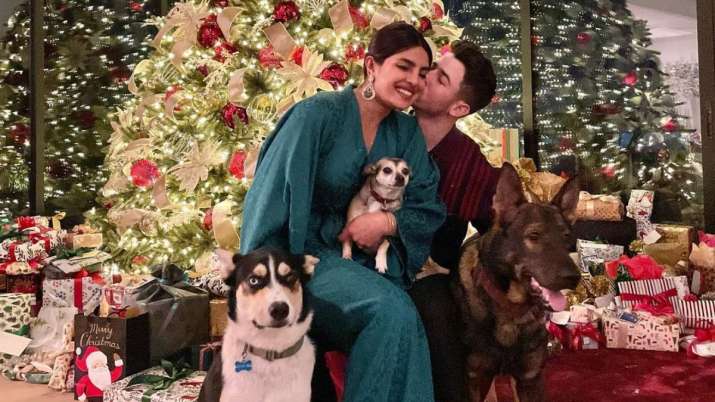 Christmas is all about love and Priyanka Chopra–Nick Jonas‘s picture proves it. Sending festive wishes to his fans, friends and family, Nick Jonas took to his social media and dropped an awwdorable picture with wifey Priyanka, who can be seen seated on his lap. In the photo, Nick perfectly expressed his love by planting a kiss on the global actress’ cheek. The couple was accompanied by their dogs– Diana, Gino and Panda.  In the backdrop, a beautiful Christmas tree lit up for the occasion can be spotted. Sharing the photo, Nick captioned it as, “Merry Christmas everyone. From our family to yours.”

The actress, who has been ruling headlines for her film The Matrix Resurrections, recently stirred a storm on the internet after she removed ‘Jonas’ from her name on Instagram. Fans started speculating that PeeCee is getting divorced from her Nick Jonas. Recently, addressing the uproar caused on social media, Priyanka said that people made a huge deal out of it and she was amused. The actress also revealed that she dropped ‘Jonas’ because she wanted to keep the same username on both Twitter and Instagram. PeeCee also asked the fans to ‘just chill’ as ‘it’s just social media’.

On November 22, Priyanka left her fans and followers shocked after she removed her husband Jonas’ surname from her name on social media.  Fans who lovingly call the couple ‘NickYanka’ could not keep calm and were worried. Priyanka Chopra Jonas says husband Nick is her ultimate shopping buddy

For the unversed, Priyanka tied the knot with Nick back in December 2018 after a whirlwind romance. They had traditional Hindu and Christian ceremonies at the Umaid Bhawan Palace in Jodhpur, India.

On the professional front, Priyanka Chopra joined Keanu Reeves in the Hollywood blockbuster franchise The Matrix. In the film, The Matrix Resurrections, the global superstar will be essaying the role of Sati. Priyanka’s character has created much hype in the audience. Her upcoming slate of films includes Jim Strouse-directed rom-com “Text For You”, Amazon thriller series “Citadel”, produced by Russo Brothers, and “Sangeet”, an unscripted series co-produced with her husband.

She will also produce a film with Amazon Studios on the life of Ma Anand Sheela, the former aide to late godman Osho Rajneesh.