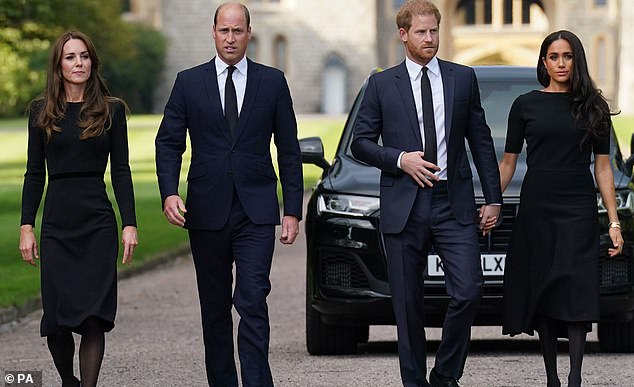 There were no winners in the devastating fallout from Prince Harry’s memoir Spare, polling has revealed.

The public approval ratings of all royals has slipped since last December – with the Prince and Princess of Wales suffering the biggest loss.

Figures released by Ipsos Mori suggest less than a quarter of Britons hold a favourable view of the Duke of Sussex- but the royal who has suffered the most since the furore began is his brother Prince William.

The heir to the throne saw his popularity decline by 8 percentage points since December 22, with his wife Kate tied with Prince Harry at a loss of 7 points. Meghan Markle, the Duchess of Sussex, also had her rating drop.

It also emerged that less than a quarter of those polled (23 per cent) said they planned to read Prince Harry’s memoir – which has become the fastest selling non-fiction book after 750,000 copies were sold in the UK in its first week. 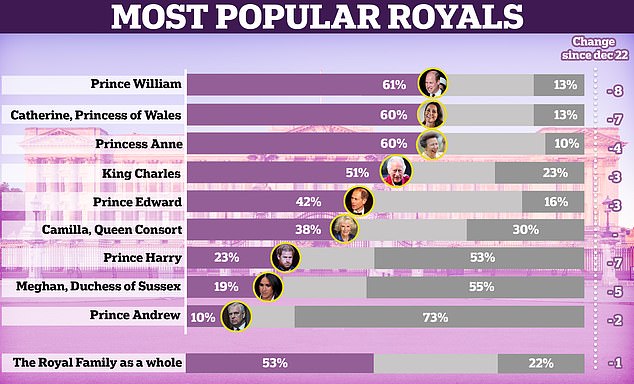 The Royal Family has suffered in the polls since the publication of Harry’s memoir Spare. The grey boxes show how many hold a negative opinion 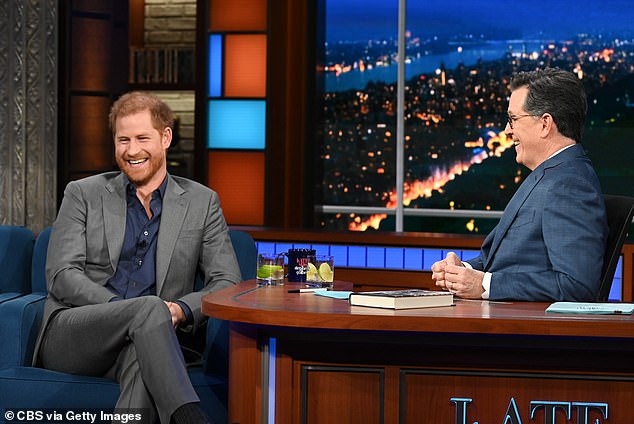 Although 60 per cent of those polled by Ipsos Mori said they liked the Prince and Princess of Wales, it is a worrying sign for a monarchy which has faced many scandals in recent years.

Older people, aged between 55-75, showed a more favourable view of Prince William than those aged between 18-34, the polling revealed.

All members of the Royal Family were found to be less popular in recent days than they had been in December, except for the Queen Consort whose popularity rating did not change.

Prince William remains the most liked with a positive rating of 61 per cent, while Kate and Princess Anne tie for second on 60 per cent.

The Royal Family has seen a tumultuous few months following the death of Queen Elizabeth II and the Sussexes’ Netflix documentary.

It launched a series of attacks on the family and the UK press, most notably alleging the then-Cambridges’ team leaked negative stories about the couple in order to distract from themselves.

But Prince Harry levelled far more allegations and damaging claims about the family in Spare, which was released earlier this month.

It included allegations of a physical assault by Prince William, who is also said to have called Meghan ‘rude’ and ‘abrasive’.

The Prince and Princess of Wales are yet to comment on the matter but the decline in their popularity could be a sign the British public is becoming fed up with the mud-slinging.

Half of those responding to the latest Ipsos Mori poll said they held ‘unfavourable’ views of the duke – compared to the near 70 per cent who backed him before the Sussexes’ decision to quit as working royals in 2019.

Meanwhile, over half of those polled said they held negative opinions on Prince Harry (53 per cent) and his wife the Duchess of Sussex (55 per cent). 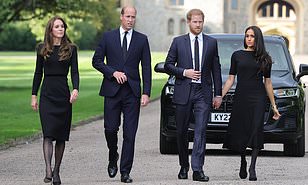 Who is YOUR favourite royal?

Prince Andrew’s popularity languishes at the bottom of the scale, with just 10 per cent of those surveyed saying they held a ‘favourable’ view of the Duke of York.

Overall, 68 per cent of those polled said they believe Prince William would make a good king.

Harry was seen to be more liked by younger audiences (33 percent among those aged 18-34) than those of older generations (8 per cent).

Kelly Beaver MBE, chief executive of Ipsos in the UK and Ireland, said the brothers’ popularity appears to have slipped in the eyes of the public in the wake of the publication of Spare.

She said: ‘The immediate impact on public opinion should not be exaggerated – and it should be noted is partly a return from the uplift in public sympathy after the sad passing of the Queen.

‘Britons are still much more positive than negative towards the King, the Prince and Princess of Wales and the Princess Royal, and towards the Royal Family as a whole, and views towards the institution as a whole are so far little changed.

‘While the stories may have challenged the public’s views towards the individuals involved, the monarchy itself endures for now.’

It comes after Americans appeared to ‘dump’ Harry and Meghan as their popularity continues to dwindle on both sides of the Atlantic.

The couple, who were previously hugely popular in the U.S., have sunk in the polls since Prince Harry launched a fresh attack on the Royal Family and revealed a range of intimate details such as how he lost his virginity in his tell-all memoir. 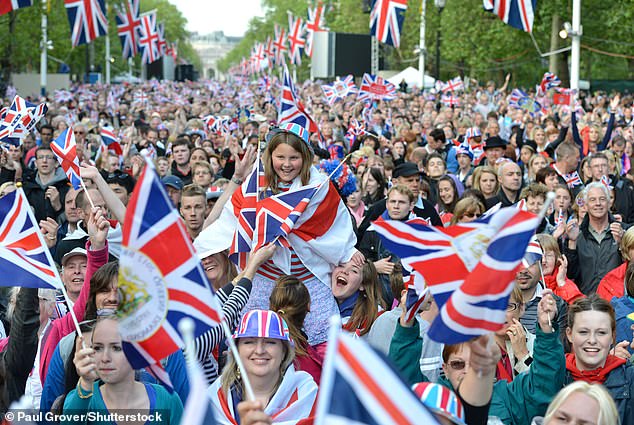 Prince Harry described the British public as being among ‘the most credulous people in the world’ as the fallout from his explosive new book continues. Pictured: Royal fans line the Mall near Buckingham Palace to mark the Queen’s Diamond Jubilee in June 2012 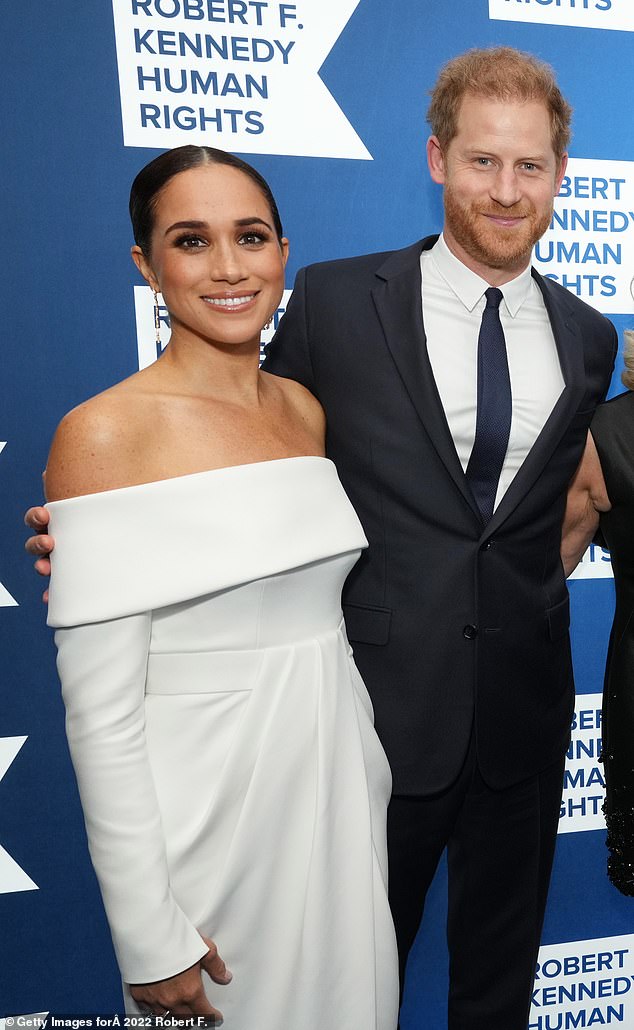 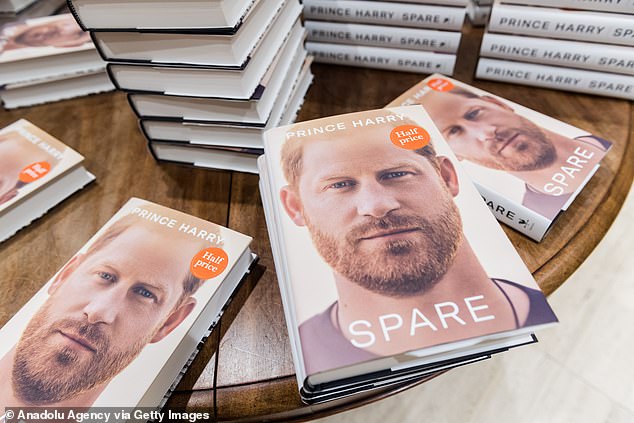 Prior to publication, Harry had a favorability rating of +38, according to a December 5 poll of 2,000 U.S. voters for Newsweek.

That has now plunged to -7, with pollsters Redfield & Wilton speaking to the same number of voters on January 16.

His wife has also seen her reputation harmed by the drama. She now has an approval rating of -13, compared to +23 on December 5.

Spare became the fastest-selling non-fiction book of all time on the day of its release earlier this month, topping sales charts around the world – including in the U.S., according to its publisher.

Harry’s controversial book has sparked headlines amid claims he was physically attacked by the Prince of Wales, his revelation he killed 25 Taliban members during the Afghanistan war, admissions of taking drugs including cocaine, cannabis and magic mushrooms, and losing his virginity in a field behind a pub to a cougar ‘horse enthusiast’ when he was 17.

But fresh questions have also been raised over the accuracy of his explosive memoir after his bold claims on royal ancestry and being gifted an Xbox game console years before its official release were debunked.

It has also put in jeopardy the family’s chance to set aside their differences at the coronation of King Charles III later this year.

The Redfield & Wilton’s poll marks a serious drop in ratings for the couple, who moved to the country after stepping back from royal duties.

The poll also found women were slightly less likely to like Meghan than men.

Asked about whether Harry was right to reveal intimate conversations with his family members in the memoir, 44 per cent said he was wrong, with 26 per cent saying he was right.

Harry has been on a media blitz since the book came out, as he had interviews with Anderson Cooper for 60 Minutes, Michael Strahan for Good Morning America, and Stephen Colbert for his late night comedy show.

Yet even some who previously supported the prince are beginning to say that the memoir is excessive, and unnecessarily brutal towards his family.

The couple have also become increasingly unpopular in the UK, with recent polling for MailOnline revealing 56 per cent of people believe they should lose all their royal titles and patronages.

Among young people, the monarchy itself is also becoming less and less welcomed. 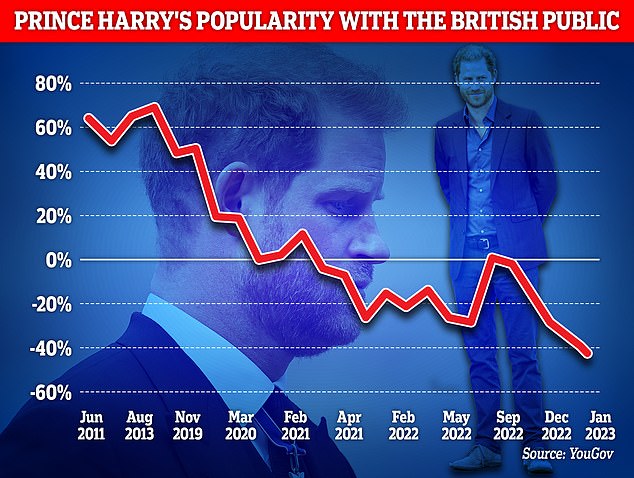 Prince Harry’s popularity among the British public has slumped to an all-time low, a YouGov poll last week suggested 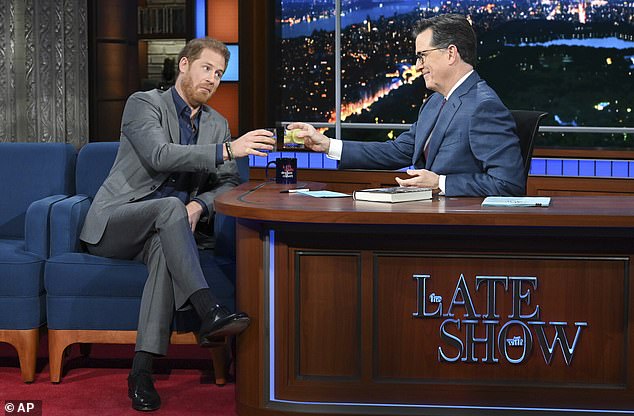 Almost two-thirds of Britons have a negative view of the Duke of Sussex, up from 58 per cent in May, with just a quarter seeing him in a positive light, a YouGov survey showed

The poll, by YouGov on behalf of MailOnline, also reveals that Harry’s attacks on Charles, his brother William and Kate have not changed the public’s perception of them at all. Kate’s polling improved.

The Prince of Wales’ polling remains strong despite being accused of attacking his younger sibling after a blazing row where he called Meghan ‘difficult’ and ‘abrasive’.

In the memoir, Prince Harry alleged that his brother shoved him into a dog’s bowl during the heated row after he began dating Meghan, leaving it in ‘pieces’.

He claimed he could tell Prince William wanted him to hit him back, but he refused to do so. He added his brother later apologised.

He also revealed personal details such as how he lost his virginity to an older woman in a field behind a pub.

In his new book, Harry claims members of the royal household regularly briefed to the press, including for negative articles about Meghan.

Harry has been criticized for sharing private conversations in the book, and intimate details about his family members.

However, the prince claimed there are many other details he has chosen not to share because ‘I just don’t want the world to know’, adding his family might not ‘ever forgive’ him if he did so.

Harry has since challenged his family members to speak with him and apologise to Meghan, though it is not clear what for.