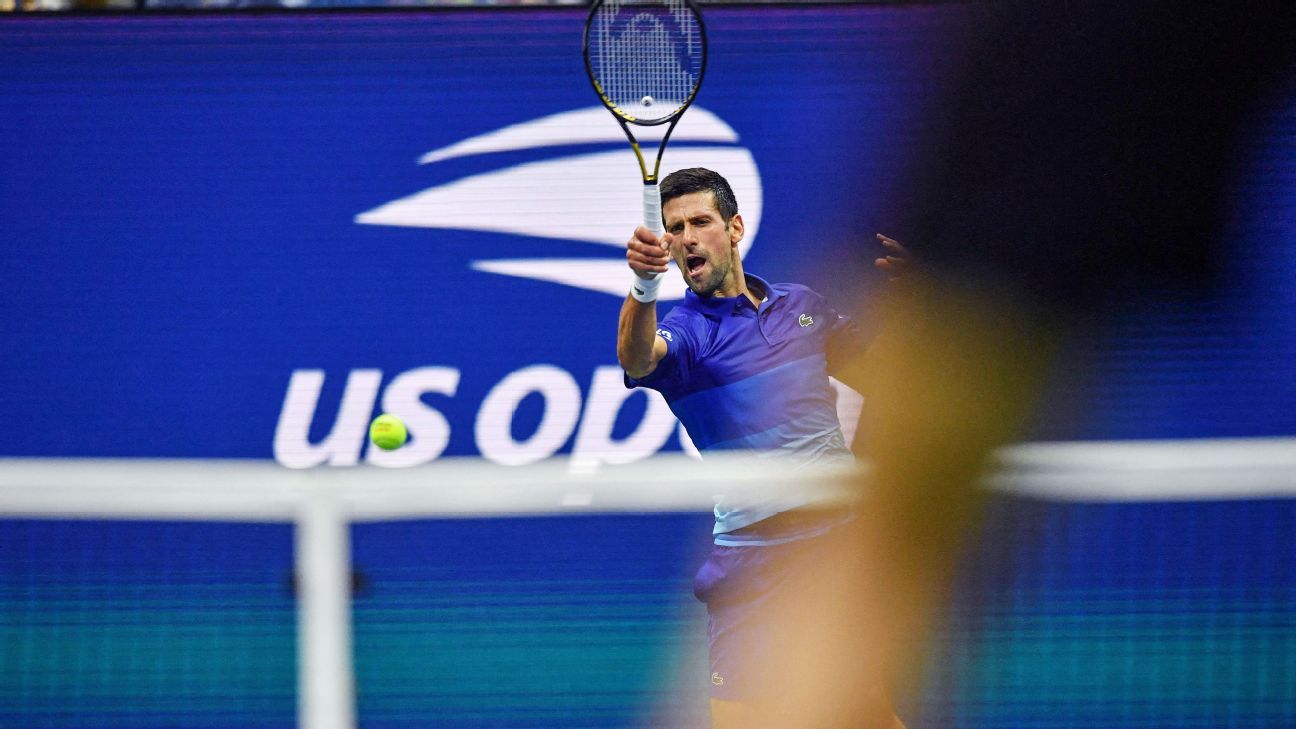 NEW YORK — For half an hour and a full set at the start, then one particularly compelling and competitive game later, Novak Djokovic‘s opponent in the US Open’s fourth round, Jenson Brooksby, gave him fits and created a raucous atmosphere under the lights at Arthur Ashe Stadium.

That let Djokovic, above all, and everyone else, too, know that Brooksby — a 20-year-old wild-card entry from California who is ranked 99th and never before had been on this sort of stage — belonged. And then, not surprisingly, Djokovic showed why he is who he is and how he’s managed to move within three victories of the first calendar-year Grand Slam in men’s tennis in 52 years.

Settling in and sending messages, to the fans with roars and to Brooksby with some staredowns, No. 1 Djokovic improved to 25-0 in majors this year by winning 1-6, 6-3, 6-2, 6-2 on Monday night. He extended his pursuit of a true Slam and a record-breaking 21st major championship while also eliminating the last American singles player in the tournament.

It is the first time in the history of an event that dates to the 1880s that no man or woman from the host country reached the quarterfinals.

One key to the turnaround by Djokovic, as good a returner as there is: He broke in Brooksby’s initial service game in each of the last three sets.

Perhaps affected by the physical nature of the extended exchanges, Brooksby was visited by an athletic trainer after the second set and again after the third. Still, for someone who never had set foot on Ashe’s blue court until about two hours before the match, when he got a chance to practice there, Brooksby never seemed overwhelmed by the setting or the circumstances.

“A very young, very talented player,” Djokovic said. “I told him at the net a bright future is ahead of him.”

His 6-foot-4 strides and reach, his anticipation, his variety including a well-disguised two-handed backhand slice, his think-steps-ahead point construction, his commitment to patterns drawn up by his coach at home in Sacramento since age 7, Joe Gilbert — all left Djokovic a tad discombobulated early.

“It wasn’t a great start for me. Obviously, Jenson was pumped. He had a clear game plan. He was executing all the shots efficiently. I was on my back foot,” said Djokovic, who is trying to be the first man since Rod Laver in 1969 to win all four Slam trophies in one year. “He was reading the play very well.”

In the first set, Brooksby made one unforced error, Djokovic 11. And Brooksby won 14 of the points that lasted five strokes or more, Djokovic four.

When Djokovic netted an overhead to move Brooksby two points from the set, most of the spectators in the 23,000-plus-capacity arena — excited to be back after last year’s ban on audiences amid the pandemic — rose, clapping and screaming.

When Djokovic missed a return to cede that set to his foe, Brooksby waved both arms and heard more loud support.

“Electric. Awesome. I enjoyed it. I truly did,” said Djokovic, who soon would be hearing his own cheers. “You guys gave both of the players a lot of energy.”

He broke to go up 2-0 in the second set and punched the air and shouted. At 3-1 arrived an epic game: six break points, nice deuces, 24 points in all, spread out over nearly 20 minutes. Djokovic pushed the ball into the net to end that game and make it 3-2, prompting Brooksby to hop and jump and windmill his arm and cry, “Let’s go!”

And then, quick as can be, Djokovic regrouped. With Brooksby gasping for air, Djokovic broke right back and, soon enough, the outcome was clear.

“The momentum,” declared Djokovic, a 34-year-old from Serbia, “was changed.”

Djokovic next meets No. 6 Matteo Berrettini of Italy in a rematch of the Wimbledon final.

The other quarterfinals on the men’s side: No. 4 Alexander Zverev of Germany vs. Lloyd Harris of South Africa, No. 12 Felix Auger-Aliassime of Canada vs. 18-year-old Carlos Alcaraz of Spain, and No. 2 Daniil Medvedev of Russia vs. qualifier Botic van de Zandschulp of the Netherlands.

For the American men, it extends the major title drought to 71 consecutive majors since Andy Roddick won the 2003 US Open. That’s the longest major singles title drought the U.S. men have had in tennis history.

It was in the fourth round last year at Flushing Meadows that Djokovic was defaulted for accidentally hitting a line judge in the throat with a tennis ball after dropping a game in his match against Pablo Carreno Busta.

Now, he moves on to play Berrettini, a 6-4, 3-6, 6-3, 6-2 winner against Oscar Otte in the quarters. Djokovic beat Berrettini to win Wimbledon and give him 20 Grand Slam titles, tied with Roger Federer and Rafael Nadal for most by a male.

Earlier Monday, Olympic champion Zverev beat Jannik Sinner 6-4, 6-4, 7-6 (7) for his 15th straight victory. The No. 4 seed from Germany started that run in Japan, carried it through a title in Cincinnati and then kept right on going at the US Open, where he was the runner-up to Dominic Thiem last year.

Zverev’s winning streak includes a victory over Djokovic in the semifinals at the Olympics. He hit 17 aces Monday and will play South African Lloyd Harris, who eliminated No. 22-seeded American Reilly Opelka 6-7 (6), 6-4, 6-1, 6-3.

Information from ESPN Stats & Information and The Associated Press was used in this report.