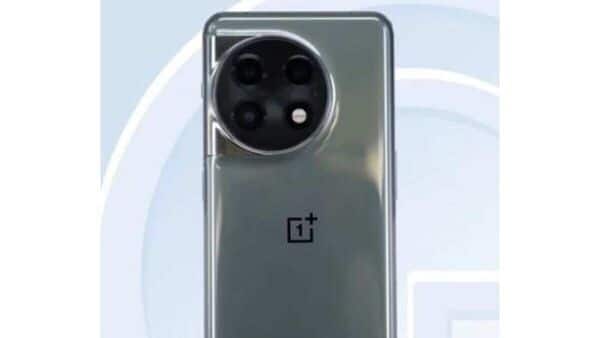 Ahead of its scheduled launch, OnePlus 11 has passed through Chinese certification website TENAA. Live images of the upcoming smartphone have surfaced on the website. In the leaked photos, one can see a circular camera island on the back. There are three camera sensors and an LED flash inside it. Hasselblad logo is also placed inside the camera island.

Power button and the volume slider can be seen located on the right edge of the device.

Recently, the handset passed through AnTuTu benchmark listing. It was listed on the website with model number PBH110. The device scored 1,341,080 points on the AnTuTu test. As per the listing, the handset will come with 16GB of RAM paired with 512GB UFS 4.0 storage capacity.

OnePlus 11 may run on Android 13 operating system. According to previous report, the OnePlus 11 phone is expected to have a 6.7-inch QHD+ screen offering a refresh rate of 120Hz. OnePlus 11 smartphone may have a punch-hole camera cut at the top.

OnePlus is said to drop the ‘pro’ model this time. Instead, it may bring a single model – OnePlus 11. The upcoming smartphone is said to offer 100 watt fast charging.

OnePlus 11 is said to come powered by the latest Qualcomm Snapdragon 8+ Gen 2 processor. The new Qualcomm chipset was launched last month. It is claimed to be 40 percent more power efficient than the ongoing one. It is offered with Snapdragon Elite Gaming technology which brings features like new Adreno GPU that claims up to 25 percent better gaming performance and Kryo CPU with up to 40 percent better power efficiency than the ongoing chipset.

The triple camera system on the smartphone may consist of a 50MP primary rear camera coupled with a 48MP ultra-wide sensor and a 2x 32MP telephoto lens. The device is expected to house a 5,000mAh battery. The phone’s Forest Emerald and Volcanic Black colour variants have already appeared online. But, other colour options are also expected.