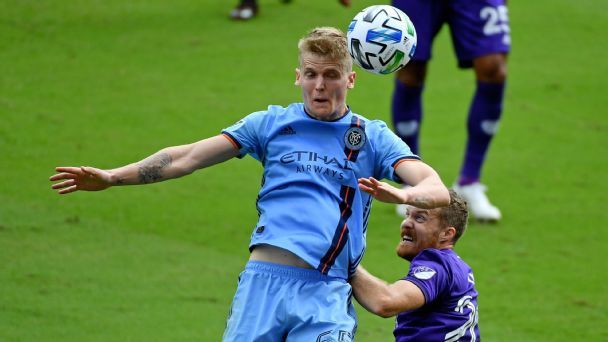 Orlando City won 6-5 on penalties after the teams played to a 1-1 draw. The win put Orlando into the Eastern Conference semifinals.

– MLS Cup playoff preview: Depth will be tested in postseason
– MLS on ESPN+: Stream LIVE games and replays (U.S. only)

Orlando goalkeeper Pedro Gallese appeared to be the hero after he denied Valentin Castellanos‘ penalty, making the score of the tiebreak 4-3 after NYCFC’s fifth kick.

But following a video review, referee Allan Chapman ruled Gallese had left his goal line early on the kick. He issued the Peruvian goalkeeper his second yellow card.

That set the stage for Schlegel to deny Gudmundur Thorarinsson‘s attempt to set off wild celebration.

But the score was still tied at 5-all with the hosts having a kick remaining. Michel eventually stepped up and converted, finally sealing Orlando’s first playoff success in club history and one of the strangest chapters in the league’s 25 years of postseason play.

Gallese finished with six saves during the 120 minutes of regulation and extra time, picking up his first yellow in the first half of extra time. Without a successful appeal to the league, he would be suspended for Orlando’s semifinal against the winner of the Philadelphia Union‘s first-round match against the New England Revolution on Tuesday night.

Orlando already was short-handed in the 87th minute when Chapman sent off Ruan for kicking at Gary Mackay-Stevens’ thigh. The two players tangled battling for the ball and tumbled to the ground.

After sending off Gallese, Chapman initially allowed substitute goalkeeper Bryan Rowe to come onto the field. But after consulting with his crew, he reversed that decision and appeared to rule that Orlando were only allowed to use a player that was already in the match.

Schlegel took the jersey from Gallese, Castellanos converted easily past him, and then New York goalkeeper Sean Johnson saved Nani’s penalty to keep the tiebreak level at 4-all. That necessitated extra kicks, where Schlegel eventually emerged as a hero.